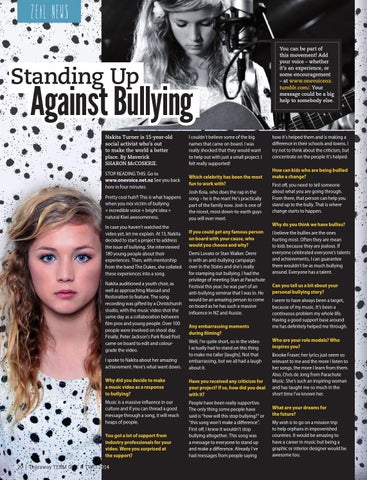 Against Bullying Nakita Turner is 15-year-old social activist who’s out to make the world a better place. By Maverick SHARON McCOSKRIE.

I couldn’t believe some of the big names that came on board. I was really shocked that they would want to help out with just a small project. I felt really supported!

STOP READING THIS. Go to www.onevoice.net.nz See you back here in four minutes.

Which celebrity has been the most fun to work with?

Pretty cool huh?! This is what happens when you mix victim of bullying + incredible voice + bright idea + natural Kiwi awesomeness. In case you haven’t watched the video yet, let me explain. At 13, Nakita decided to start a project to address the issue of bullying. She interviewed 180 young people about their experiences. Then, with mentorship from the band The Dukes, she collated these experiences into a song. Nakita auditioned a youth choir, as well as approaching Massad and Restoration to feature. The song recording was gifted by a Christchurch studio, with the music video shot the same day as a collaboration between film pros and young people. Over 100 people were involved on shoot day. Finally, Peter Jackson’s Park Road Post came on board to edit and colourgrade the video.

Josh Koia, who does the rap in the song – he is the man! He’s practically part of the family now. Josh is one of the nicest, most down-to-earth guys you will ever meet.

Demi Lovato or Stan Walker. Demi is with an anti-bullying campaign over in the States and she’s really for stamping out bullying. I had the privilege of meeting Stan at Parachute Festival this year; he was part of an anti-bullying seminar that I was in. He would be an amazing person to come on board as he has such a massive influence in NZ and Aussie. Any embarrassing moments during filming?

I spoke to Nakita about her amazing achievement. Here’s what went down. Why did you decide to make a music video as a response to bullying?

Have you received any criticism for your project? If so, how did you deal with it?

Music is a massive influence in our culture and if you can thread a good message through a song, it will reach heaps of people.

how it’s helped them and is making a difference in their schools and towns. I try not to think about the criticism, but concentrate on the people it’s helped. How can kids who are being bullied make a change? First off, you need to tell someone about what you are going through. From there, that person can help you stand up to the bully. That is where change starts to happen. Why do you think we have bullies?

If you could get any famous person on board with your cause, who would you choose and why?

Well, I’m quite short, so in the video I actually had to stand on this thing to make me taller [laughs]. Not that embarrassing, but we all had a laugh about it.

You got a lot of support from industry professionals for your video. Were you surprised at the support?

You can be part of this movement! Add your voice – whether it’s an experience, or some encouragement – at www.onevoicenz. tumblr.com/. Your message could be a big help to somebody else.

I believe the bullies are the ones hurting most. Often they are mean to kids because they are jealous. If everyone celebrated everyone’s talents and achievements, I can guarantee there wouldn’t be as much bullying around. Everyone has a talent. Can you tell us a bit about your personal bullying story? I seem to have always been a target, because of my music. It’s been a continuous problem my whole life. Having a good support base around me has definitely helped me through. Who are your role models? Who inspires you? Brooke Fraser; her lyrics just seem so relevant to me and the more I listen to her songs, the more I learn from them. Also, Chris de Jong from Parachute Music. She’s such an inspiring woman and has taught me so much in the short time I’ve known her. What are your dreams for the future? My wish is to go on a mission trip to help orphans in impoverished countries. It would be amazing to have a career in music but being a graphic or interior designer would be awesome too. 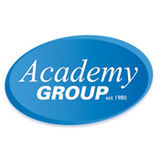