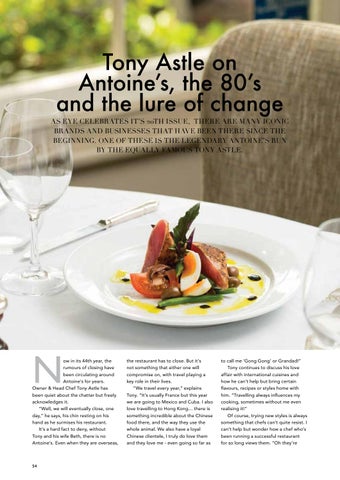 Tony Astle on Antoine’s, the 80’s and the lure of change

AS EYE CELEBRATES IT’S 20TH ISSUE, THERE ARE MANY ICONIC BRANDS AND BUSINESSES THAT HAVE BEEN THERE SINCE THE BEGINNING. ONE OF THESE IS THE LEGENDARY ANTOINE’S RUN BY THE EQUALLY FAMOUS TONY ASTLE.

ow in its 44th year, the rumours of closing have been circulating around Antoine’s for years. Owner & Head Chef Tony Astle has been quiet about the chatter but freely acknowledges it. “Well, we will eventually close, one day,” he says, his chin resting on his hand as he surmises his restaurant. It’s a hard fact to deny, without Tony and his wife Beth, there is no Antoine’s. Even when they are overseas,

the restaurant has to close. But it’s not something that either one will compromise on, with travel playing a key role in their lives. “We travel every year,” explains Tony. “It’s usually France but this year we are going to Mexico and Cuba. I also love travelling to Hong Kong… there is something incredible about the Chinese food there, and the way they use the whole animal. We also have a loyal Chinese clientele, I truly do love them and they love me - even going so far as

to call me ‘Gong Gong’ or Grandad!” Tony continues to discuss his love affair with international cuisines and how he can’t help but bring certain flavours, recipes or styles home with him. “Travelling always influences my cooking, sometimes without me even realising it!” Of course, trying new styles is always something that chefs can’t quite resist. I can’t help but wonder how a chef who’s been running a successful restaurant for so long views them. “Oh they’re 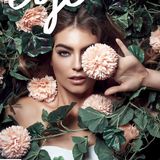