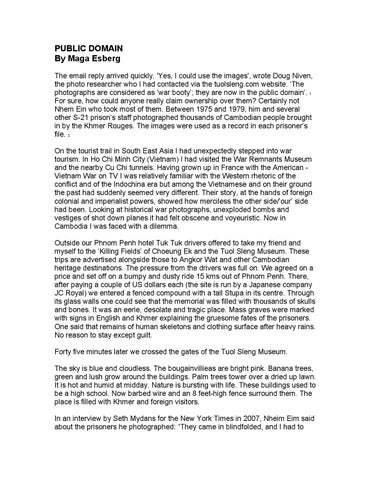 PUBLIC DOMAIN By Maga Esberg The email reply arrived quickly. &#39;Yes, I could use the images&#39;, wrote Doug Niven, the photo researcher who I had contacted via the tuolsleng.com website. ‘The photographs are considered as ‘war booty’; they are now in the public domain’. 1 For sure, how could anyone really claim ownership over them? Certainly not Nhem Ein who took most of them. Between 1975 and 1979, him and several other S-21 prison’s staff photographed thousands of Cambodian people brought in by the Khmer Rouges. The images were used as a record in each prisoner’s file. 2 On the tourist trail in South East Asia I had unexpectedly stepped into war tourism. In Ho Chi Minh City (Vietnam) I had visited the War Remnants Museum and the nearby Cu Chi tunnels. Having grown up in France with the American Vietnam War on TV I was relatively familiar with the Western rhetoric of the conflict and of the Indochina era but among the Vietnamese and on their ground the past had suddenly seemed very different. Their story, at the hands of foreign colonial and imperialist powers, showed how merciless the other side/’our’ side had been. Looking at historical war photographs, unexploded bombs and vestiges of shot down planes it had felt obscene and voyeuristic. Now in Cambodia I was faced with a dilemma. Outside our Phnom Penh hotel Tuk Tuk drivers offered to take my friend and myself to the ‘Killing Fields’ of Choeung Ek and the Tuol Sleng Museum. These trips are advertised alongside those to Angkor Wat and other Cambodian heritage destinations. The pressure from the drivers was full on. We agreed on a price and set off on a bumpy and dusty ride 15 kms out of Phnom Penh. There, after paying a couple of US dollars each (the site is run by a Japanese company JC Royal) we entered a fenced compound with a tall Stupa in its centre. Through its glass walls one could see that the memorial was filled with thousands of skulls and bones. It was an eerie, desolate and tragic place. Mass graves were marked with signs in English and Khmer explaining the gruesome fates of the prisoners. One said that remains of human skeletons and clothing surface after heavy rains. No reason to stay except guilt. Forty five minutes later we crossed the gates of the Tuol Sleng Museum. The sky is blue and cloudless. The bougainvillieas are bright pink. Banana trees, green and lush grow around the buildings. Palm trees tower over a dried up lawn. It is hot and humid at midday. Nature is bursting with life. These buildings used to be a high school. Now barbed wire and an 8 feet-high fence surround them. The place is filled with Khmer and foreign visitors. In an interview by Seth Mydans for the New York Times in 2007, Nheim Eim said about the prisoners he photographed: “They came in blindfolded, and I had to

untie the cloth,” he said. “‘Look straight ahead. Don’t lean your head to the left or the right.’ That’s all I said,” he recalled. “I had to say that so the picture would turn out well. Then they were taken to the interrogation centre. The duty of the photographer was just to take the picture.”3 After the photographs were taken the prisoners were interrogated, often tortured. Finally when a confession had been obtained, the prisoners were murdered. S-21 was a secret Khmer Rouge facility run by Kang Keck Ieu alias Duch. According to a former guard interviewed by David Chandler in the book ‘Voices from S-21’, Duch didn’t kill prisoners himself but would sometimes observe the executions at Choeung Ek. It is thought that as many as 17 000 people came through the doors of the S-21 facility. Only seven are known to have survived. No one knows really why the prisoners were photographed. The photographs might have acted as evidence that the ‘enemies of the state’ were taken care of. 4 In the Killing of Cambodia: Geography, Genocide and the Unmaking of Space published in 2008, James A Tyler writes that ‘when the Democratic Kampuchea people stood victorious in the streets of Phnom Penh on April 17, 1975, they constituted neither a centralized, efficient political party nor a military force. He adds that ’their victory was the haphazard by-product of the culmination of a series of concurrent revolutions and social movements: anti-colonial, antimonarchical, anti-American and anti-Vietnamese.’ Cambodia at that stage was war-torn and exhausted. During the next four years the Khmer Rouge headed by Pol Pot brought Cambodia and Cambodians into chaos. People were starved to death, tortured, or killed. In the 1979 documentary ‘Year Zero’ the Australian journalist John Pilger gives a powerful and moving account of the pre- and postKhmer Rouge era. 5 After the fall of the Democratic Kampuchea regime to the Vietnamese in January 1979, S-21 was turned into the Tuol Sleng Museum under the direction of Mai Lam, a Vietnamese army man. Mai Lam was fluent in Khmer and had extensive experience in museology (he had organized the Museum of American War Crimes in Vietnam). His role in Cambodia was to organize the documents found at S-21 (written confessions, photographs, torture equipment, the building itself) as records of the crimes of the Democratic Kampuchea regime and to gather evidence for future trials against Pol Pot and the Khmer Rouges. 6 In 1993, two US photographers based in Phnom Penh, Doug Niven and David Riley set up a non-profit organization the Photo Archive Group to preserve the 6000 original photographic negatives they had found rotting in metal cabinets and covered in mould at the former S-21 facility. 7. The original negatives are currently housed at the Tuol Sleng Museum and digital copies are held in several archives such as the Cambodian Genocide Program at Yale University and the DC-Cam Project and the PAG. 8. In 1996 Niven and Tyley wanted the photographs to reach a broader audience. They edited some of them into a book

entitled ‘the Killing Fields’. They chose to print the negatives in full-frame. Their book contained a hundred high quality prints selected from the archive. It toured various museums and art galleries including the Museum Of Modern Art in New York and the ‘Rencontres Photographiques d’ Arles’ in 1997. The purchase by MOMA of some of the prints and the exhibition of the photographs in an art context caused some controversy. The printing of the original negatives in full frame was also criticized.9 The photographs in this book were taken at the Tuol Sleng Museum. One of the buildings displays some of the photographs of the prisoners while the others show cells and torture instruments. Some of the photographs on display are passport size enlargements similar to the prints that would have being attached to the prisoner’s confession. They are arranged in large grid formation. Other images are shown as exhibition prints. It seems that the prison documentation staff had used 2 and 1/4 inch black and white film and then cropped the negative to a mug shot ratio. Riley and Niven in making the decision to print the negatives in full frame revealed unintentional details. As a photographer I was immediately struck by the quality and beauty of theses photographs. As a human being I found them very painful. In almost all the photographs, the women, men or children look directly into the lens - as directed by the photographers. Their individual and collective gaze is haunting. Who are they? Why are they here? How different are they from the people I met today on the streets? What happened to them? Why? Some of the sitters are wounded; some show fear in their eyes, others their resignation, or both. Some are so young. Mould on some of the negatives has printed out as black stains; almost foreshadowing an imminent and inevitable death. Fixer stains and washing marks remind me of the tangible presence of the photographic process. Unintentional details; a blindfolded person waiting for their turn, a hand holding a prisoner still, two hearts graffiti-ed on a wall reveal the moment when the photographs were taken. That day at Tuol Sleng, life subtlety reflected itself in the glass protecting the photographs. So did the metal bars on the window. My response was to use my camera. The Khmer Rouge almost succeeded in silencing Cambodia. These iconic photographs of S-21 have somehow become the faces of the Cambodian genocide. They have passed into the collective consciousness. By discussing them and discussing genocide we might be able to prevent another Rwanda, another East Timor and another Serbia happening. In a sense genocide like these photographs has become part of the public domain. On February 3, 2012 Kang Keck Ieu alias Duch was ordered by The Extraordinary Chambers in the Courts of Cambodia, commonly known as the

&quot;Khmer Rouge Tribunal&quot; ‘to serve out the rest of his life in prison because of his &quot;shocking and heinous&quot; crimes against the Cambodian people’. Three senior Khmer Rouge figures are still currently on trial: Nuon Chea, Khieu Samphan and Ieng Sary. They are accused of crimes against humanity, genocide, religious persecution, homicide and torture. Pol Pot, Brother Number One died in 1997 before being put on trial. The Khmer Rouge tribunal is seeking justice for an estimated 1.7 million people who died from torture, starvation, exhaustion or lack of medical care during the Khmer Rouge&#39;s rule between 1975 and 1979. 10 Nheim Ein and other Khmer Rouge staff will not be prosecuted. Whilst almost everyone in Cambodia has lost someone to the KR tragedy, countless former Khmer Rouge members continue to enjoy life as free men and women. 11 Maga Esberg 2012 List of references/ sources: Personal correspondence with Doug Niven. www.tuolsleng.com 2 http://www.nytimes.com/2007/10/26/world/asia/27cambo.html By SETH MYDANS Published: October 26, 2007 3 http://www.nytimes.com/2007/10/26/world/asia/27cambo.html By SETH MYDANS Published: October 26, 2007 4 Terror and Secrecy in Pol Pot’s secret prison. By Peter H. Maguire. Voices from S21. David Chandler 5 http://johnpilger.com/videos/year-zero-the-silent-death-of-cambodia 6 Terror and Secrecy in Pol Pot’s secret prison. Voices from S21. David Chandler 7 Facing death in Cambodia By Peter H. Maguire 8 The database on the Yale CGP holds the 5000 digital images. http://www.yale.edu/gsp/ http://www.yale.edu/cgp/dccam.html http://www.dccam.org 9 The atrocity exhibition: touring cambodian genocide memorials. Paul Williams. On display: New Essays In Cultural Studies Victoria university press. Edited By Anna Smith, Lydia Wevers Art in the Face of Radical Evil T De Duve - October, 2008 - MIT Press 10 http://www.guardian.co.uk/world/2012/feb/03/khmer-rouge-duch-sentencecambodian 11 Getting away with genocide?: Elusive justice and the Khmer Rouge Tribunal By Tom Fawthrop, Helen Jarvis 2005 1