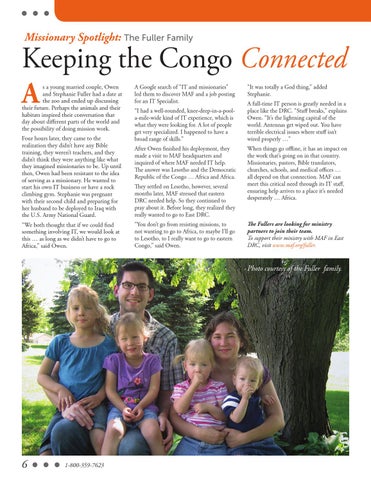 Keeping the Congo Connected A s a young married couple, Owen and Stephanie Fuller had a date at the zoo and ended up discussing their future. Perhaps the animals and their habitats inspired their conversation that day about different parts of the world and the possibility of doing mission work. Four hours later, they came to the realization they didn’t have any Bible training, they weren’t teachers, and they didn’t think they were anything like what they imagined missionaries to be. Up until then, Owen had been resistant to the idea of serving as a missionary. He wanted to start his own IT business or have a rock climbing gym. Stephanie was pregnant with their second child and preparing for her husband to be deployed to Iraq with the U.S. Army National Guard. “We both thought that if we could find something involving IT, we would look at this … as long as we didn’t have to go to Africa,” said Owen.

A Google search of “IT and missionaries” led them to discover MAF and a job posting for an IT Specialist.

“I had a well-rounded, knee-deep-in-a-poola-mile-wide kind of IT experience, which is what they were looking for. A lot of people get very specialized. I happened to have a broad range of skills.”

After Owen finished his deployment, they made a visit to MAF headquarters and inquired of where MAF needed IT help. The answer was Lesotho and the Democratic Republic of the Congo … Africa and Africa. They settled on Lesotho, however, several months later, MAF stressed that eastern DRC needed help. So they continued to pray about it. Before long, they realized they really wanted to go to East DRC. “You don’t go from resisting missions, to not wanting to go to Africa, to maybe I’ll go to Lesotho, to I really want to go to eastern Congo,” said Owen.

“It was totally a God thing,” added Stephanie.

A full-time IT person is greatly needed in a place like the DRC. “Stuff breaks,” explains Owen. “It’s the lightning capital of the world. Antennas get wiped out. You have terrible electrical issues where stuff isn’t wired properly …”

When things go offline, it has an impact on the work that’s going on in that country. Missionaries, pastors, Bible translators, churches, schools, and medical offices … all depend on that connection. MAF can meet this critical need through its IT staff, ensuring help arrives to a place it’s needed desperately … Africa.

The Fullers are looking for ministry partners to join their team. To support their ministry with MAF in East DRC, visit www.maf.org/fuller.

Photo courtesy of the Fuller family. 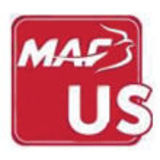 In this issue: "Ending Leprosy In The Congo" and "The Right Word For Every Generation"; Tech Corner discusses the new glass cockpit; the fea...

In this issue: "Ending Leprosy In The Congo" and "The Right Word For Every Generation"; Tech Corner discusses the new glass cockpit; the fea...