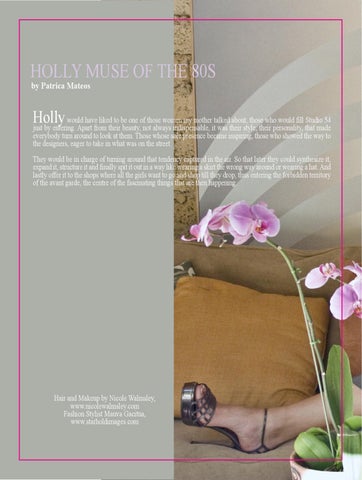 HOLLY MUSE OF THE 80S by Patrica Mateos

Holly would have liked to be one of those women my mother talked about, those who would fill Studio 54 just by entering. Apart from their beauty, not always indispensable, it was their style, their personality, that made everybody turn around to look at them. Those whose sole presence became inspiring, those who showed the way to the designers, eager to take in what was on the street.

They would be in charge of turning around that tendency captured in the air. So that later they could synthesize it, expand it, structure it and finally spit it out in a way like wearing a skirt the wrong way around or wearing a hat. And lastly offer it to the shops where all the girls want to go and shop till they drop, thus entering the forbidden territory of the avant garde, the centre of the fascinating things that are then happening.