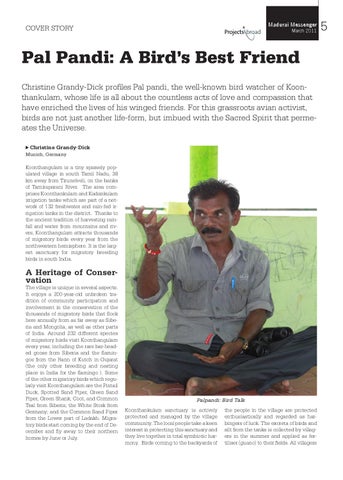 Pal Pandi: A Birdâ&#x20AC;&#x2122;s Best Friend Christine Grandy-Dick profiles Pal pandi, the well-known bird watcher of Koonthankulam, whose life is all about the countless acts of love and compassion that have enriched the lives of his winged friends. For this grassroots avian activist, birds are not just another life-form, but imbued with the Sacred Spirit that permeates the Universe. Christine Grandy-Dick Munich, Germany

Koonthangulam is a tiny sparsely populated village in south Tamil Nadu, 38 km away from Tirunelveli, on the banks of Tamiraparani River. The area comprises Koonthankulam and Kadankulam irrigation tanks which are part of a network of 132 freshwater and rain-fed irrigation tanks in the district. Thanks to the ancient tradition of harvesting rainfall and water from mountains and rivers, Koonthangulam attracts thousands of migratory birds every year from the northwestern hemisphere. It is the largest sanctuary for migratory breeding birds in south India.

A Heritage of Conservation

The village is unique in several aspects. It enjoys a 200-year-old unbroken tradition of community participation and involvement in the conservation of the thousands of migratory birds that flock here annually from as far away as Siberia and Mongolia, as well as other parts of India. Around 232 different species of migratory birds visit Koonthangulam every year, including the rare bar-headed goose from Siberia and the flamingos from the Rann of Kutch in Gujarat (the only other breeding and nesting place in India for the flamingo ). Some of the other migratory birds which regularly visit Koonthangulam are the Pintail Duck, Spotted Sand Piper, Green Sand Piper, Green Shank, Coot, and Common Teal from Siberia; the White Stork from Germany; and the Common Sand Piper from the Lower part of Ladakh. Migratory birds start coming by the end of December and fly away to their northern homes by June or July.

Palpandi: Bird Talk Koonthankulam sanctuary is actively protected and managed by the village community. The local people take a keen interest in protecting this sanctuary and they live together in total symbiotic harmony. Birds coming to the backyards of

the people in the village are protected enthusiastically and regarded as harbingers of luck. The excreta of birds and silt from the tanks is collected by villagers in the summer and applied as fertiliser (guano) to their fields. All villagers 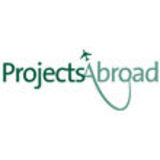 A famous Zen aphorism says that when the student is ready, the teacher appears. One such student was Helen Keller and the teacher, the “mira...

A famous Zen aphorism says that when the student is ready, the teacher appears. One such student was Helen Keller and the teacher, the “mira...