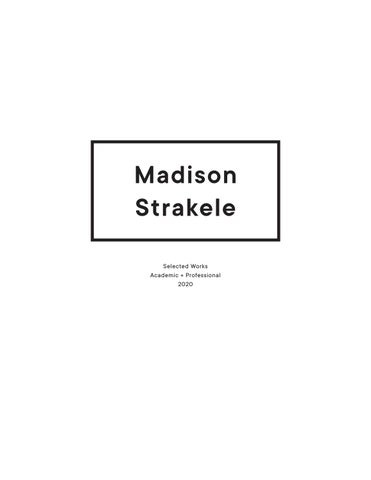 As the name suggests, Cinderella Blocks is composed of just that, countless “cinder” blocks. The form, a mash-up of iconic castle elevations, speaks to the history of castle construction, an act that has spanned centuries. Each added iteration introduces new material, scale, and style. In this particular case, a new cinder block. However, they are not your average cinder blocks. Here, they’re not solely a building material. Like Cinderella’s pumpkin carriage, Bippidi Boppidi Boo! The blocks themselves transform into something more. Varying scales of grout and block map across the form, each representing their programmatic means, be it floors, walls, mullions, or stairs. Like their actual construction, the elevations read no differently than the section cuts just as the plans, with a minor shift here and there, barely change from floor to floor.

Parade Floatress provides an escape from responsibilities for a life of fun. Once a primitive cube, now a living, breathing, fantastical parade float outfitted with a series of defense mechanisms. Cannons and crenellations project out of the cube, one on top of the other, to provide protection from the ever-present threat of vapidity. While the original form is indiscernible from the outside, a small section cut reveals the primitive inner form. Inside, the occupants of this fortified float fire brightly colored smoke and confetti over passersby.

Unlike its Benthamite predecessor, Panopti”crown” seeks to nullify the negative connotations of power and surveillance, and in turn, provide a facility for firefighters that promotes a healthy mind and body through varying degrees of visibility. Located in the heart of Downtown, where mid-rise mix with single-family homes, this Fire Station is an adaptation of both. On the first floor, we have three distinct programs; the Fire Department’s HQ, the Apparatus Bay, and the new hands-on Museum. All of which wrap around a center that has vehicle access with a tower for training and demonstrative purposes. Each program on the first floor connects to the unified second floor, the firefighter’s private quarters, via circulation cores. Directly across from the Fire Department’s Headquarters are the main living and dining areas with proximity to the locker room, promoting healthy camaraderie during work shifts. The dormitories have direct access to the core leading to the Apparatus Bay, to ensure quick response times for emergencies. The Museum continues onto the second floor, where firefighters share their library and classrooms with the community. The cellular rooms of each floor frame the exterior center providing views across the entire Fire Station. This level of visibility allows both firefighters and members of the

community to connect while also maintaining a certain level of privacy. This combination is critical to firefighters, as they are not only responsible for the health and safety of others, but for their own as well. The building then crowned with a unifying facade comprised of perforated metal panels and a brick-like framework, a staple in the history of Fire Station construction. Circular openings are scattered across the facade like jewels in a crown, providing natural light for the communal spaces. The perforated panels conversely provide privacy and filtered light.

Cells Section Circulation cores flank second-floor cells, each crowned with a unique ceiling that responds to the programâ&amp;#x20AC;&amp;#x2122;s division of space

A peculiarity emerges as a symbiosis of suburban and urban multi-family housing in response to a nationwide decline in city population growth. The far-removed two-car garage and white picket fence challenge the infamous superblock. The low-lying mat typology contains interconnected clusters of residential units, interspersed with public amenities: a gymnasium, a pool, and a multipurpose space with at-grade parking. The residential density is twice that of nearby suburbia, yet the outdoor space given to each unit offers a luxury not found in most urban settings today. In contrast to the suburban model, which separates the front yard from the back, a singular yard directly off each unit connects to the adjacent public park. The rotating metal panels enclosing the yard allow expansion at the expense of privacy, in turn, offering opportunities to grow a prosperous community. The residential units surround three types of community parks: the grassy lawn, with an additional entry on the opposite side; the garden, which provides another level of ownership and individuality for the residents; and the widely accessible patio that leads to the publicly available amenities.

At 97 units across roughly 8.5 acres, the project offsets the mat’s lack of ruthless efficiency present in a typical superblock by introducing a residential tower along Jefferson Avenue. Shifting the tower away from the water’s edge, unlike the adjacent sites, the project reconsiders waterfront development along the river: the tower maintains views of the river and Belle Isle while allowing the mat typology to integrate with the continuous river walk and pocket parks. Additionally, the mat typology becomes a fifth facade for the tower. Scattered across the roof are “chimneys,” skylights for the at-grade units that blend in with vent pipes creating a folly of tubes during the day, and a field of lights at night amongst the protruding trees.

Department Story is a fantasy-action shopping adventure through the combination of castle and department store typologies. Despite the seeming obsolescence of both the castle and department store, their similarity in scale and massing, defined entry, and defensive strategies, as well as a role in shaping towns and cities, has significantly contributed to their legendary existence. In video games like the Legend of Zelda, the hero embarks on an adventure to save the kingdom of Hyrule, all the while filling his backpack with potions, arrows, and armor that he purchases with colorful gemstones. The game is a glorified shopping trip in which the hero scales mountains, crosses desolate wasteland, and braves the strongest of storms in forests, deserts, and snowy peaks. All within a questionable walking distance of one another, to find a green tunic or glass jar. As the video game industry progressed, the game redesigned several times; each rendition advanced the dimension and resolution of the kingdom and its castle, the design of which, have been rigorously documented for application. Graphic styles such as 16bit, texture mapping, photorealism, and celshading create episodic space for the diverse departments located throughout the store. Like the castle, we may see in our lifetime the department store turn relic due to the

increasing success of online shopping. However, window-shopping and peoplewatching to this day remain Americaâ&amp;#x20AC;&amp;#x2122;s favorite pastimes. With that in mind and the use of video game aesthetics as a means of narrative design, 2D imagery, cut-outs, and 3D extrusions are applied in plan, section, and elevation to breathe new life into the Department Story.

Noodle Project Lead: Madison Strakele Design Team: Ryan Fickenscher, Nick Althouse, Carlos Terminel Iberri, Clay Maxey Photography: Nick Althouse Downtown Mesa has a long history as the vibrant community center of Arizona’s thirdlargest city. It has become a gathering place where people from all walks of life can come to celebrate art, music, and culture. As the city has grown in recent decades to welcome more families and young people, events like the Main Street Prototyping Festival present a unique opportunity to build exhibits and art installations that engage the community and tell a story about our desert home. With these objectives in mind, our team designed an exciting and colorful project to liven up one of the under-served alleyways of downtown. The concept comprised of an undulating tunnel created with a series of colorful varying archways. Several residents of the community mentioned that they would like to see more emphasis placed on the areas around Main Street, creating an inviting passage was a great way to accomplish this. Festival-goers can walk through the tunnel from Main Street to Pepper Place, encouraging them to explore the entirety of the downtown area. The organic and flowing form of the tunnel contrasts with the static grid of Mesa’s downtown infrastructure. As one travels through the structure, they must weave around the curves and, at times, crouch down, engaging them physically while stimulating them mentally. Additionally, the arches can

rearrange in various ways to create new passageways and distinct forms, which makes the project modular and relocatable. For the construction of the piece, we wanted to explore the use of inexpensive and unconventional materials to keep the cost low and installation simple. Using pool noodles serves a dual purpose, as both a fun multi-colored material for the arches and a commentary on suburban living. Growing up in Arizona, some of our fondest memories revolve around swimming pools and the respite they grant from the harsh summer months. These positive associations from childhood are immediately recalled by the ubiquitous pool toys, and encourage playtime as part of the Mesa’s Main Street Prototyping Fair’s desire for a “creative playground.”

I’ve recently graduated with a Master of Architecture from the University of Michigan’s Taubman College of Architecture and Urban Planning, where I developed a thesis in the study of castles and imaginative spaces. Using the castle typology as my medium, this selection of work addresses various architectural strategies, from iconicity, circulation, and the division of private and public spaces, to something as nuanced as the grout laid between bricks. And, puns. Lots of puns. 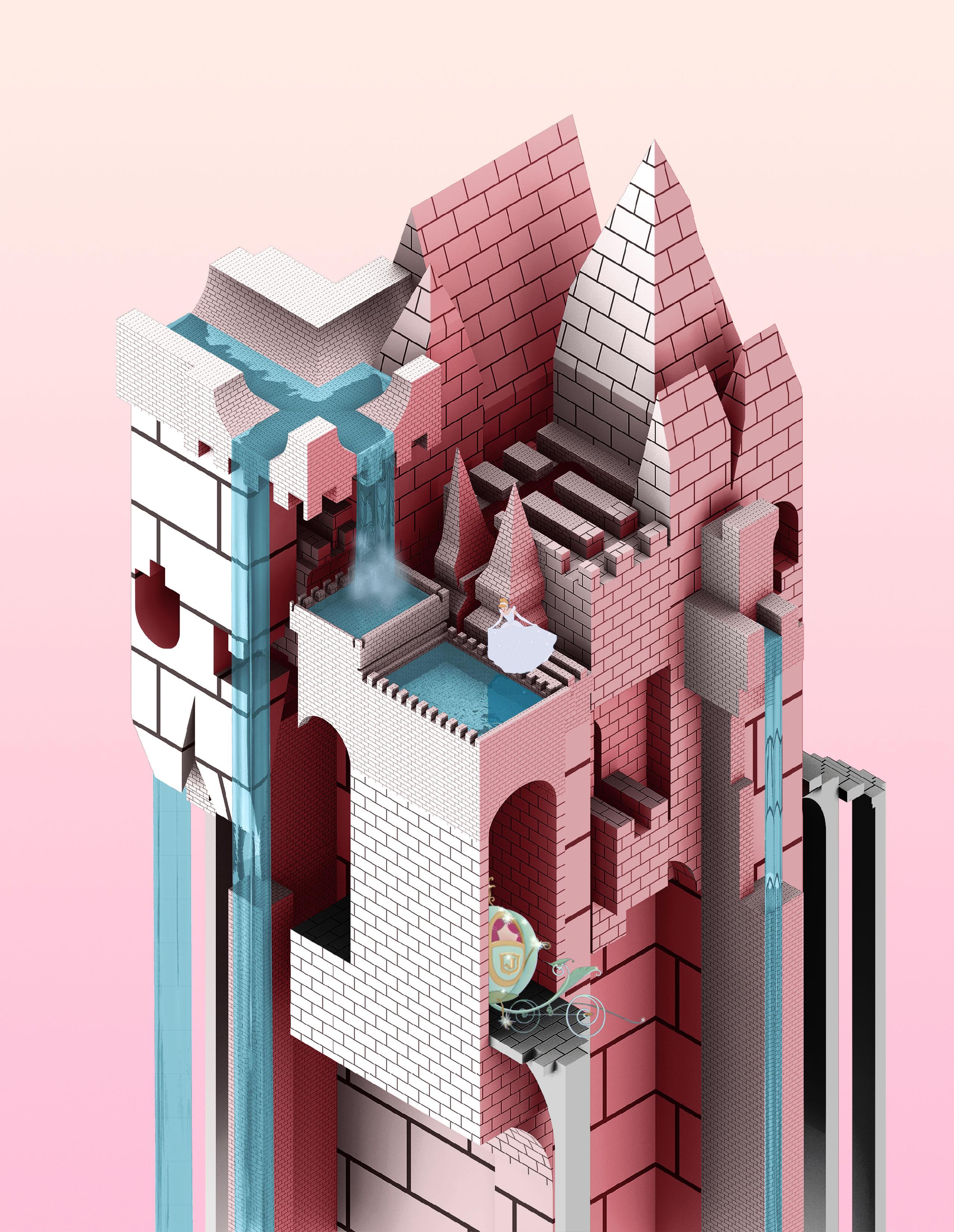 Hotel An ode to castle construction, blocks and grout lines 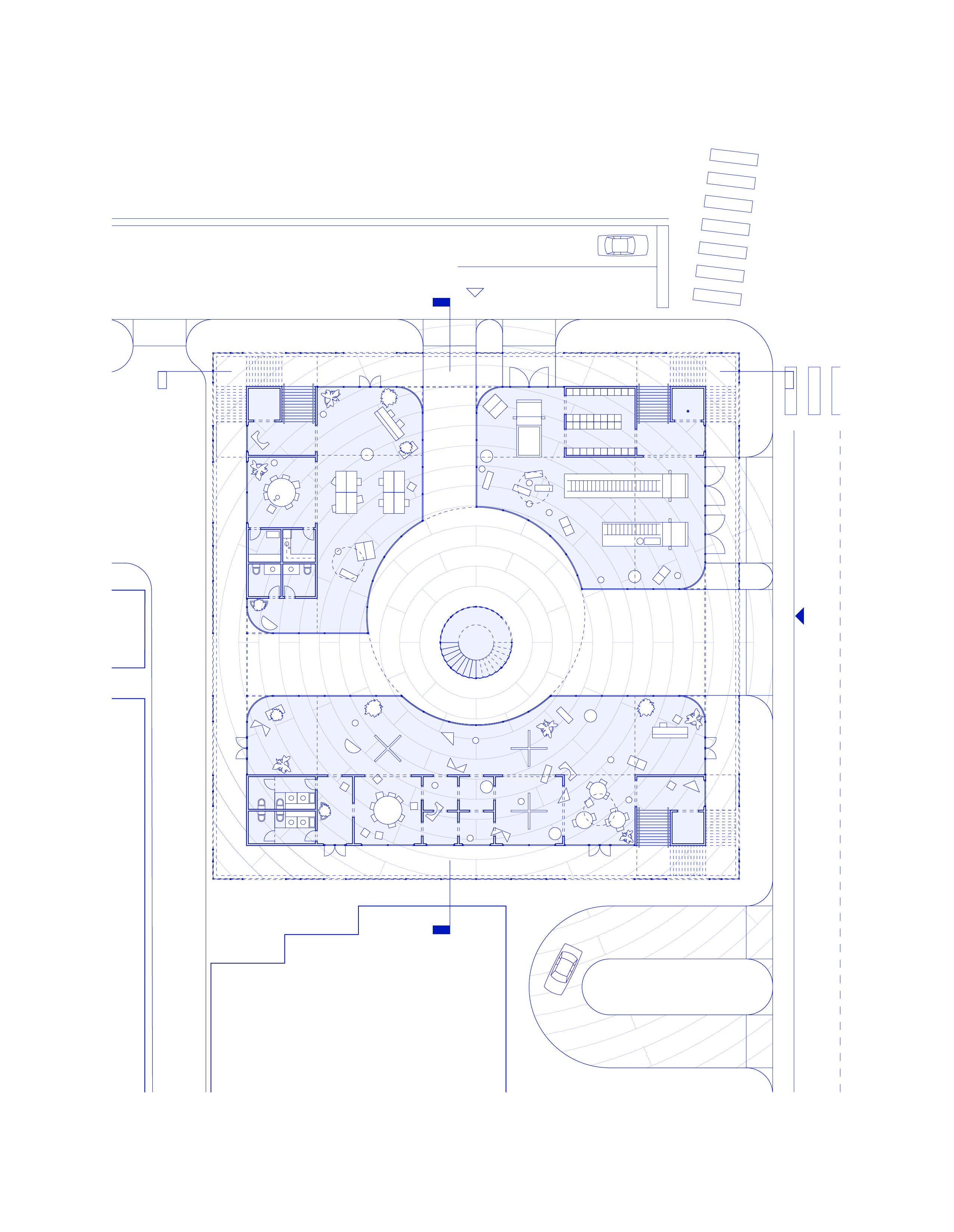 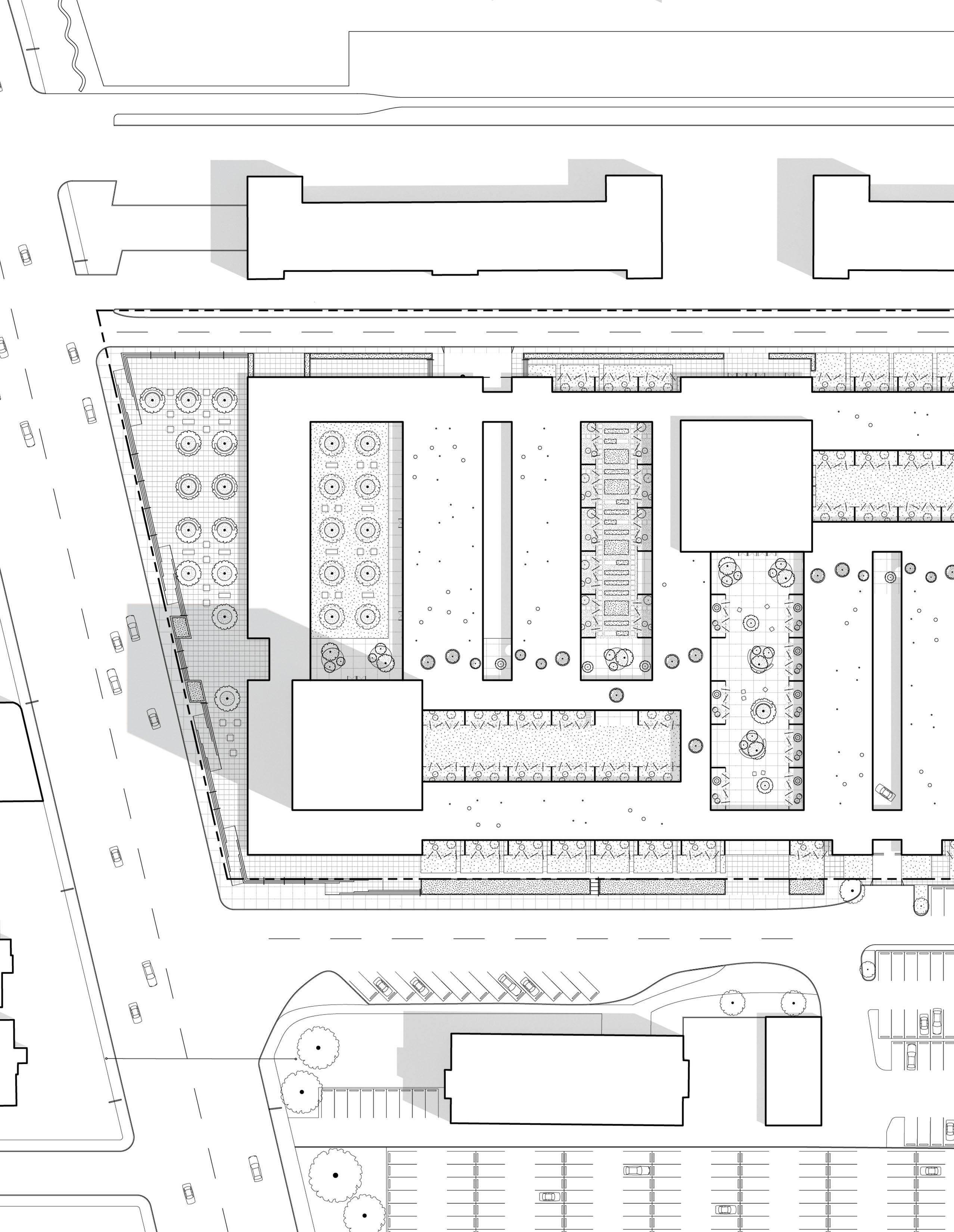 Multi-Family Housing Blurring the line between suburban and urban typologies 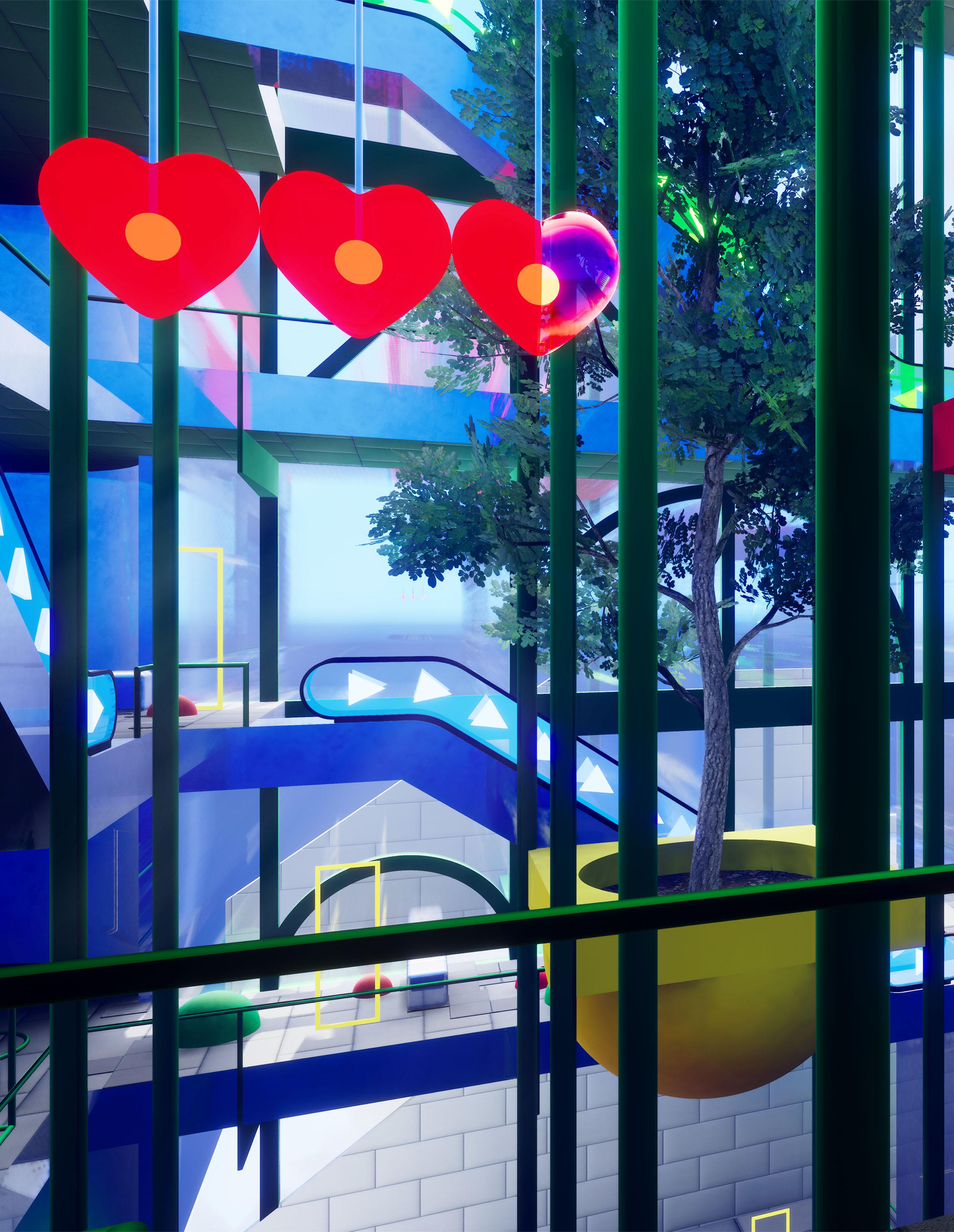 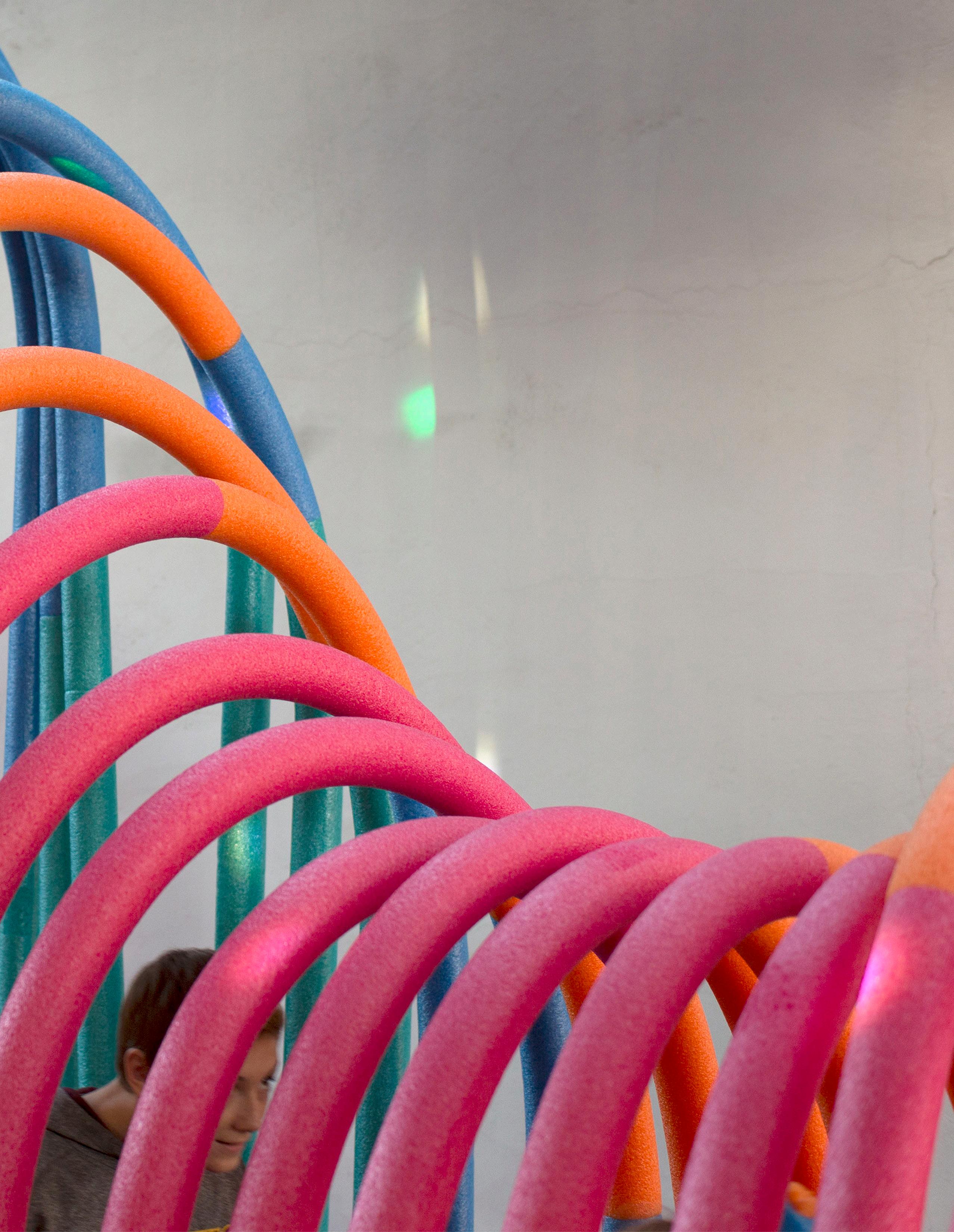