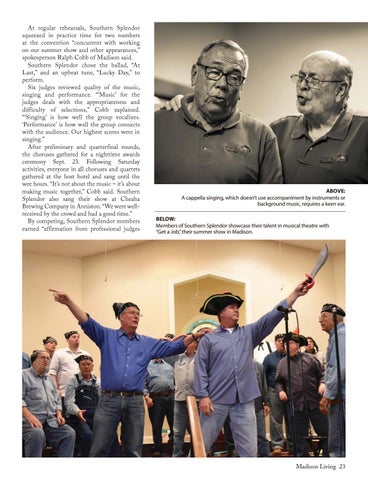 At regular rehearsals, Southern Splendor squeezed in practice time for two numbers at the convention “concurrent with working on our summer show and other appearances,” spokesperson Ralph Cobb of Madison said. Southern Splendor chose the ballad, “At Last,” and an upbeat tune, “Lucky Day,” to perform. Six judges reviewed quality of the music, singing and performance. “’Music’ for the judges deals with the appropriateness and difficulty of selections,” Cobb explained. “‘Singing’ is how well the group vocalizes. ‘Performance’ is how well the group connects with the audience. Our highest scores were in singing.” After preliminary and quarterfinal rounds, the choruses gathered for a nighttime awards ceremony Sept. 23. Following Saturday activities, everyone in all choruses and quartets gathered at the host hotel and sang until the wee hours. “It’s not about the music – it’s about making music together,” Cobb said. Southern Splendor also sang their show at Cheaha Brewing Company in Anniston. “We were wellreceived by the crowd and had a good time.” By competing, Southern Splendor members earned “affirmation from professional judges

ABOVE: A cappella singing, which doesn’t use accompaniment by instruments or background music, requires a keen ear. BELOW: Members of Southern Splendor showcase their talent in musical theatre with “Get a Job,” their summer show in Madison.