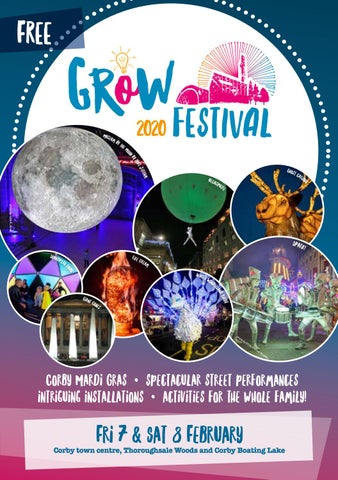 Welcome Welcome to the third and final Grow Festival, two days of illuminating performances, experiences and workshops across Corby town centre. This year’s festival is inspired by the theme of light, filling the town centre with bright and colourful performances and experiences. Families can enjoy amazing street performers, spectacular art, music and Luke Jerram’s Museum Of The Moon. We are confident there’s something for everyone to enjoy. Grow Festival 2020 is the third in a series of festivals commissioned by Made in Corby and co‑produced with The Core at Corby Cube funded by Arts Council England through the National Lottery. This year we have joined forces with ArtReach to incorporate the highly-successful Corby Mardi Gras into the festival. As Corby is one of the fastest growing boroughs outside of London, the festivals are aptly inspired by themes of water, light and food – all essential ingredients for growth. We want to specially thank our Youth Advisory Panel, and the many local people volunteering their time to make the festival happen – we couldn’t have done it without you. Throughout the festival there will be opportunities to give a small donation. Please give whatever you are able to. Tickets are now on sale for the Full Moon Party on Saturday night at www.thecorecorby.com. We hope that you enjoy our spectacular light-themed festival, Helen Willmott

Director, Made in Corby

Director, The Core at Corby Cube

With thanks Special thanks to the team at ArtReach, the Grow Festival Youth Advisory Panel, Corby Borough Council, Kay McGinley at Willow Place, James Howarth at RS Components, Max Robinson at Corby Library, Suzy Geraghty at Pen Green Nursery, Rob Purdie and the Made In Corby Consortium (Corby Community Arts, The Core at Corby Cube, Groundwork Northamptonshire, KHL Big Local, Greatwell Homes and Teamwork Trust) and all of our wonderful Arts Ambassadors and volunteers.

Created by acclaimed multidisciplinary artist Luke Jerram, the installation is a fusion of lunar imagery, moonlight and surround sound composition created by BAFTA and Ivor Novello award-winning composer Dan Jones. Measuring seven metres in diameter, the moon features 120dpi detailed NASA imagery of the lunar surface. At an approximate scale of 1:500,000, each centimetre of the internally lit spherical sculpture represents 5km of the moon’s surface. The Museum Of The Moon has captured audience’s imaginations across the world –from New York and Beijing to Glastonbury and London. As it travels from place to place, it gathers new musical compositions and an ongoing collection of personal responses, stories and mythologies, as well as highlighting the latest moon science. #museumofthemoon

Join us for a party under the moon as local DJ BARBWIRE raises the roof with Club and Jungle classics. TICKETS £5 BOOK AT WWW.THECORECORBY.COM

Spark! is a mesmerising street theatre show that combines high impact drumming with kaleidoscopic lighting design. Ethereal and playful characters use captivating and dramatic music to interact with the crowd, leading spectators on a spellbinding journey.

Follow the Spark! drummers and colourful lanterns as they progress from James Ashworth VC Square through spectacular illuminated installations in Thoroughsale Woods to the Boating Lake to explore an intriguing and enchanting garden of fire.

Fire Dream is a unique installation of fire. A dreaming woman’s head sleeps in a nest of fire. Surrounding her is a ‘palace of fire’ where large fireballs and towers stand guard over her resting place. Inside this palace four people move around. Three of them are strangely dressed like bee keepers and look after the flames. The fourth person is shaman like and plays calm and restful sounds. SOUNDPLAY PROJECTS

Inspired by many years spent combining digital art and music to stimulate creativity in youngsters, Ewan Sinclair and Bal Cooke have created a multisensory, audio-visual pop up playground where sound, animation and interactive technology collide. Play, roll, drum, move or sing, the Soundplay Dome wants you to experiment and have fun with music and sound.

Spiralling and spinning and seemingly weightless, an acrobat suspended beneath a helium balloon explores the uncharted space between street level and rooftops. It’s a spectacle to inspire, mystify and enchant!

An intriguing, ever evolving installation - a kaleidoscopic experience of wonder through animated light, colour and sound. Gaze through special glasses into a portal of sound and colour as it takes you on a journey of wonder. Portal Of Reflection provides an opportunity for you to take a moment to reconnect with yourself and remind yourself about what is important in life. APUS PRODUCTIONS

These magical giant birds have stunning illuminated fanned tails which change colours according to the Birds’ mood to create a beautiful rainbow display. Accompanied by the snow queen, they are sure to entertain and inspire audiences of all ages. THINGUMAJIG THEATRE

Giant illuminated creatures that are part caribou and part spirit roam a mystical world after dark, accompanied by a wild herdsperson. As the crowd gathers, they clear a space to perform their otherworldly ceremony. With music, song and shadow puppets they tell stories of lost homes, impossible migrations and seeds of hope before continuing the journey into their hauntingly beautiful dream-world. SPACE CADETS

Overview Effect is a bold projected animation that celebrates the ambition and technical achievement of the 1969 moon landing. It celebrates what the human race is capable of achieving and considers the cost of the problems we choose to ignore. Underview Effect is inspired by the environmental themes of Overview Effect and was created by young artists from Corby in collaboration with MBD and puppeteer Tom Cleaver. It was created for Grow Festival as part of a week-long art residency at The Core. THE CHILDREN OF PEN GREEN NURSERY PRESENT

THIS LITTLE LIGHT OF MINE

Come and discover this magical mixed media installation, exploring light, sound and movement inspired by the creativity of our youngest artists ever featured in Grow Festival. Co-created with the children of Pen Green Nursery. With special thanks to Anna Daly. Installation by Kaitlin Ferguson and soundscape by Lee Affen. ARTREACH AND CORBY YOUNG WRITERS

What does home mean to you? Young people in Corby are working with multi-media artist Laurence Payot and Writing East Midlands to create a series of poems to be projected across Corby town centre. Building on Laurence’s work with refugees and asylum seekers across the UK, exploring how feelings of home can give you strength and resilience in difficult situations, young people in Corby will add their own stories of what home means to them.

THE PEOPLE’S STAGE Come and celebrate the talent in Corby with fantastic and uplifting performances from local choirs.

Join Same Sky artists to make wonderful lanterns for the Mardi Gras Parade. Either decorate a globe lantern or use willow, tissue and your creativity to make your own lantern to carry. No previous experience needed just bundles of enthusiasm and old clothes (there will be glue). Bring your lantern back to James Ashworth VC Square on Friday at 6pm to take part in the parade. Book online at madeincorby.eventbrite.com

Experience this unique sensory installation and create whole orchestras of sound by simply moving over special infra-red sensors. Sound-paintings can also be played by moving your hands over the surface and you can “paint” rainbows of colour around the space. There will be a special performance by children from Red Kite Academy of their own Symphony Of The Senses on Sat 8 February at 12pm. The school performance will be led by composer David Stevens with support from Eye Music Trust. Delivered by Eye Music Trust through funding from Arts Council England and support from Made in Corby.

Join RS Components and the STEM Ambassadors for a fun STEM building challenge that is suitable for ages 8+. The goal is to build a device using a Sphero robot and control it via drive or code to complete a challenge circuit. Delivered with generous support from RS Components

OUT OF THIS WORLD CRAFT WORKSHOPS SAT 8 FEBRUARY 11AM-3PM (DROP IN ANYTIME AND STAY AS LONG AS YOU LIKE) - CORBY LIBRARY, CORBY CUBE

Drop in to Corby Library and have a go at some funfilled free ‘Out Of This World’ themed crafts! There will be several craft activities that will take between 5 or 10 minutes each to create.

To Kettering and Northampton

To Oundle and Stamford

Find out the full line-up for Grow Festival 2020 www.growcorby.co.uk 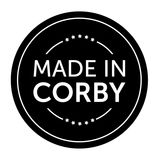