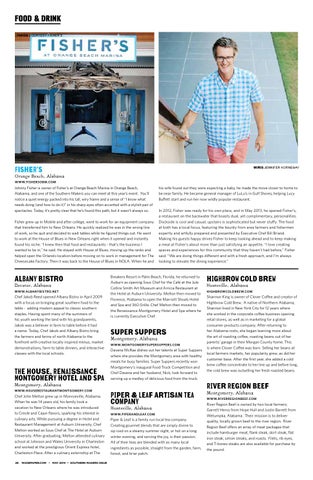 Johnny Fisher is owner of Fisher’s at Orange Beach Marina in Orange Beach, Alabama, and one of the Southern Makers you can meet at this year’s event. You’ll notice a quiet energy packed into his tall, wiry frame and a sense of “I know what needs doing (and how to do it)” in his sharp eyes often accented with a stylish pair of spectacles. Today, it’s pretty clear that he’s found this path, but it wasn’t always so. Fisher grew up in Mobile and after college, went to work for an equipment company that transferred him to New Orleans. He quickly realized he was in the wrong line of work, so he quit and decided to wait tables while he figured things out. He went to work at the House of Blues in New Orleans right when it opened and instantly found his niche. “I knew then that food and restaurants - that’s the business I wanted to be in,” he said. He stayed with House of Blues, moving up the ranks and helped open the Orlando location before moving on to work in management for The Cheesecake Factory. Then it was back to the House of Blues in NOLA. When he and

Chef Jakob Reed opened Albany Bistro in April 2009 with a focus on bringing great southern food to the table - adding modern appeal to classic southern staples. Having spent many of the summers of his youth working the land with his grandparents, Jakob was a believer in farm to table before it had a name. Today, Chef Jakob and Albany Bistro bring the farmers and farms of north Alabama to the forefront with creative locally inspired menus, market demonstrations, farm to table dinners, and interactive classes with the local schools.

his wife found out they were expecting a baby, he made the move closer to home to be near family. He became general manager of LuLu’s in Gulf Shores, helping Lucy Buffett start and run her now wildly popular restaurant. In 2012, Fisher was ready for his own place, and in May 2013, he opened Fisher’s, a restaurant on the backwater that boasts dual, yet complimentary, personalities. Dockside is cool and casual; upstairs is sophisticated but never stuffy. The food at both has a local focus, featuring the bounty from area farmers and fishermen expertly and artfully prepared and presented by Executive Chef Bill Briand. Making his guests happy drives Fisher to keep looking ahead and to keep making a meal at Fisher’s about more than just satisfying an appetite. “I love creating spaces and experiences for this community that they haven’t had before,” Fisher said. “We are doing things different and with a fresh approach, and I’m always looking to elevate the dining experience.”

Breakers Resort in Palm Beach, Florida, he returned to Auburn as opening Sous Chef for the Café at the Jule Collins Smith Art Museum and Arricia Restaurant at the Hotel at Auburn University. Melton then moved to Florence, Alabama to open the Marriott Shoals Hotel and Spa and 360 Grille. Chef Melton then moved to the Renaissance Montgomery Hotel and Spa where he is currently Executive Chef.

Davena McRae dishes out her talents at Super Suppers where she provides the Montgomery area with healthy meals for busy families. Super Suppers recently won Montgomery’s inaugural Food Truck Competition and Chef Davena and her husband, Nick, look forward to serving up a medley of delicious food from the truck.

Chef John Melton grew up in Monroeville, Alabama. When he was 14 years old, his family took a vacation to New Orleans where he was introduced to Creole and Cajun flavors, sparking his interest in culinary arts. While pursuing a degree in Hotel and Restaurant Management at Auburn University, Chef Melton worked as Sous Chef at The Hotel at Auburn University. After graduating, Melton attended culinary school at Johnson and Wales University in Charleston and worked at the prestigious Orient Express hotel, Charleston Place. After a culinary externship at The 28

Piper & Leaf is a family run local tea company. Creating gourmet blends that are simply divine to sip iced on a steamy summer night, or hot on a long winter evening, and serving the joy, is their passion. All of their teas are blended with as many local ingredients as possible, straight from the garden, farm, forest, and briar patch.

Shannon King is owner of Clover Coffee and creator of Highbrow Cold Brew. A native of Northern Alabama, Shannon lived in New York City for 12 years where she worked in the corporate coffee business opening retail stores, as well as in marketing for a global consumer products company. After returning to her Alabama roots, she began learning more about the art of roasting coffee, roasting beans out of her parents’ garage in their Morgan County home. This is where Clover Coffee was born. Selling her beans at local farmers markets, her popularity grew, as did her customer base. After the first year, she added a cold brew coffee concentrate to her line up and before long, the cold brew was outselling her fresh roasted beans. 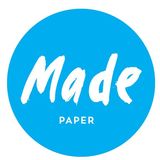