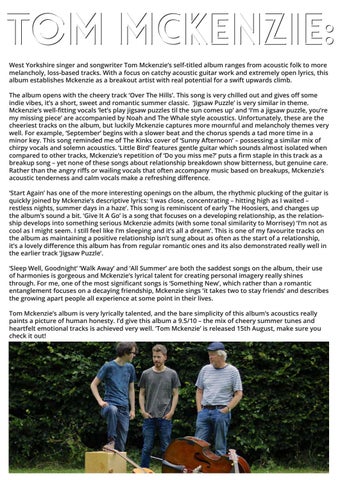 Tom McKenzie: Mckenzie: West Yorkshire singer and songwriter Tom Mckenzie’s self-titled album ranges from acoustic folk to more melancholy, loss-based tracks. With a focus on catchy acoustic guitar work and extremely open lyrics, this album establishes Mckenzie as a breakout artist with real potential for a swift upwards climb. The album opens with the cheery track ‘Over The Hills’. This song is very chilled out and gives oﬀ some indie vibes, it’s a short, sweet and romantic summer classic. ‘Jigsaw Puzzle’ is very similar in theme. Mckenzie’s well-ﬁtting vocals ‘let’s play jigsaw puzzles til the sun comes up’ and ‘I’m a jigsaw puzzle, you’re my missing piece’ are accompanied by Noah and The Whale style acoustics. Unfortunately, these are the cheeriest tracks on the album, but luckily Mckenzie captures more mournful and melancholy themes very well. For example, ‘September’ begins with a slower beat and the chorus spends a tad more time in a minor key. This song reminded me of The Kinks cover of ‘Sunny Afternoon’ – possessing a similar mix of chirpy vocals and solemn acoustics. ‘Little Bird’ features gentle guitar which sounds almost isolated when compared to other tracks, Mckenzie’s repetition of ‘Do you miss me?’ puts a ﬁrm staple in this track as a breakup song – yet none of these songs about relationship breakdown show bitterness, but genuine care. Rather than the angry riﬀs or wailing vocals that often accompany music based on breakups, Mckenzie’s acoustic tenderness and calm vocals make a refreshing diﬀerence. ‘Start Again’ has one of the more interesting openings on the album, the rhythmic plucking of the guitar is quickly joined by Mckenzie’s descriptive lyrics: ‘I was close, concentrating – hitting high as I waited – restless nights, summer days in a haze’. This song is reminiscent of early The Hoosiers, and changes up the album’s sound a bit. ‘Give It A Go’ is a song that focuses on a developing relationship, as the relationship develops into something serious Mckenzie admits (with some tonal similarity to Morrisey) ‘I’m not as cool as I might seem. I still feel like I’m sleeping and it’s all a dream’. This is one of my favourite tracks on the album as maintaining a positive relationship isn’t sung about as often as the start of a relationship, it’s a lovely diﬀerence this album has from regular romantic ones and its also demonstrated really well in the earlier track ‘Jigsaw Puzzle’. ‘Sleep Well, Goodnight’ ‘Walk Away’ and ‘All Summer’ are both the saddest songs on the album, their use of harmonies is gorgeous and Mckenzie’s lyrical talent for creating personal imagery really shines through. For me, one of the most signiﬁcant songs is ‘Something New’, which rather than a romantic entanglement focuses on a decaying friendship, Mckenzie sings ‘it takes two to stay friends’ and describes the growing apart people all experience at some point in their lives. Tom Mckenzie’s album is very lyrically talented, and the bare simplicity of this album’s acoustics really paints a picture of human honesty. I’d give this album a 9.5/10 – the mix of cheery summer tunes and heartfelt emotional tracks is achieved very well. ‘Tom Mckenzie’ is released 15th August, make sure you check it out! 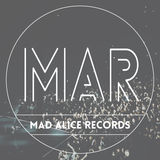