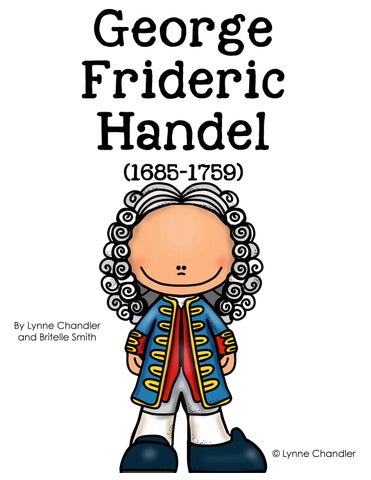 By: e ll e t us lla JChandler By Lynne re a and Britelle Smith M

On February 23, 1685, George Frederic Handel was welcomed into the world. He was born in the small Saxon town of Halle, Germany, only 20 miles from the city of Leipzig.

When he was older, George changed the spelling of his middle name slightly from Frederic to Frideric. Another famous musician, Johann Sebastian Bach, was also born in Germany the same year George was born.

Georgeâ&amp;#x20AC;&amp;#x2122;s father was a barber-surgeon. He worked for a nobleman. A barber-surgeon was not an ordinary barber. Barber-surgeons pulled teeth, fixed broken bones and helped sick people like doctors do today.

When George was a little boy, his father told him he wanted him to grow up to be a lawyer, not a musician. George did study law for one year when he was older. But from the very beginning, he loved music.

Georgeâ&amp;#x20AC;&amp;#x2122;s mother was very kind and understanding. She knew how much George loved music. George wanted to learn how to play the spinet. A spinet is like a very small harpsichord or piano. One day his mother helped him sneak a spinet up to their attic. George covered the strings of the spinet with strips of cloth. This way he was able to practice every night without his father hearing him.

When he was seven, George played a concert on the organ of the court chapel. He played so well that the duke of the province came up afterward and filled his pockets with gold coins. The duke told George’s father, “Such talent can only come from God.” The duke was able to convince George’s father to let George study music.

For three years George studied organ, harpsichord, violin and oboe. He took lessons from the church organist, Friedrich Zachau. Friedrich was one of the best teachers in the country. By the time George was eleven years old, he was already writing music for church services and concerts.

George was very interested in the world around him. He liked to explore and travel. He also liked to learn about all different kinds of music. When he was 21 years old he went to Italy for five years. In Italy he composed more music for churches. He also learned how to write operas. An opera is like a play, except people sing instead of say their parts. Instruments usually play the music too.

In 1710 George left Italy and moved to England. He lived there for the rest of his life. One of the first pieces of music he composed in England was the Te Deum. The Te Deum is in the Latin language. It is a very old hymn giving praise and thanks to God. Many different musicians have written music for this hymn. The first words are always the same,”Te Deum laudamus.” In English that means “We praise thee, God.”

In 1710 George also wrote some special music for the birthday of Queen Anne. She was the Queen of England. Queen Anne liked Georgeâ&amp;#x20AC;&amp;#x2122;s music very much. She gave him money for the rest of his life so he would be free to just compose music.

Another very famous piece of music George composed is called Water Music. He wrote it for King George I, the King of England. He played it as the kingâ&amp;#x20AC;&amp;#x2122;s royal party drifted down the famous Thames River in London on a riverboat.

In 1741 George was invited to the city of Dublin, Ireland. He was asked to conduct a concert of some of his own music. All the money people paid to hear the concert was going to help people who were poor and needy.

George wrote the Messiah for that special concert. George locked himself into his apartment in London for 24 days and wrote the whole Messiah. He only let one of his friends disturb him during this time to bring him food. The “Messiah” is a very famous oratorio. An oratorio is a story from the Bible or another kind of religious story put to music. The words of the “Messiah” tell about the coming of Jesus into our world. Messiah means anointed one.

George made this style of music famous. He is considered one of the greatest composers who ever lived because of his oratorios. Even the famous composer, Ludwig Van Beethoven, said George was â&amp;#x20AC;&amp;#x153;the master of us all.â&amp;#x20AC;?

A huge crowd of people was expected to come to the first performance of the Messiah. All the newspapers in Dublin had a special announcement. The announcement asked the ladies “not to come with Hoops.” It also asked the men “to come without their Swords.” Then maybe there would be enough room for everyone.

The next time the Messiah was performed was in London a year later. King George II came to hear it. He loved its “Hallelujah Chorus” so much when he heard it that he stood up for the whole piece. Because the king stood up, all the people had to stand up too. And they had to stay standing up as long as the king did. Even now if you go to hear the Messiah performed, you will see everyone stand up while the “Hallelujah Chorus” is being sung.

George went blind during the last few years of his life. He died at age 47 on April 14, 1759. He died the day before Easter. He was buried at Westminster Abbey in London. On a sculpture over his grave it says, â&amp;#x20AC;&amp;#x153;I know that my Redeemer liveth.â&amp;#x20AC;? That saying is taken from a piece in his Messiah. You can still go and visit his tomb in London today. 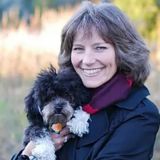