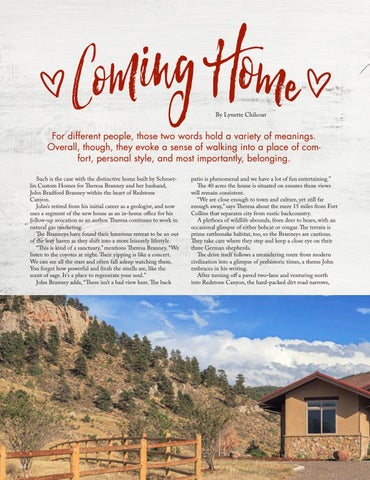 For different people, those two words hold a variety of meanings. Overall, though, they evoke a sense of walking into a place of comfort, personal style, and most importantly, belonging. Such is the case with the distinctive home built by Schroetlin Custom Homes for Theresa Branney and her husband, John Bradford Branney within the heart of Redstone Canyon. John’s retired from his initial career as a geologist, and now uses a segment of the new house as an in-home office for his follow-up avocation as an author. Theresa continues to work in natural gas marketing. The Branneys have found their luxurious retreat to be an out of the way haven as they shift into a more leisurely lifestyle. “This is kind of a sanctuary,” mentions Theresa Branney. “We listen to the coyotes at night. Their yipping is like a concert. We can see all the stars and often fall asleep watching them. You forget how powerful and fresh the smells are, like the scent of sage. It’s a place to regenerate your soul.” John Branney adds, “There isn’t a bad view here. The back

patio is phenomenal and we have a lot of fun entertaining.” The 40 acres the house is situated on ensures those views will remain consistent. “We are close enough to town and culture, yet still far enough away,” says Theresa about the mere 15 miles from Fort Collins that separates city from rustic backcountry. A plethora of wildlife abounds, from deer to bears, with an occasional glimpse of either bobcat or cougar. The terrain is prime rattlesnake habitat, too, so the Branneys are cautious. They take care where they step and keep a close eye on their three German shepherds. The drive itself follows a meandering route from modern civilization into a glimpse of prehistoric times, a theme John embraces in his writing. After turning off a paved two-lane and venturing north into Redstone Canyon, the hard-packed dirt road narrows,

2016-11-Lydia's Style Magazine NOVEMBER HOLIDAY Our festive annual holiday issue has an emphasis on celebrations, family, fashion, gifting, and traditions with a focus on the people of our region and planning ahead for the New Year. 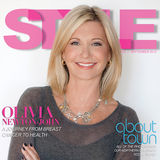