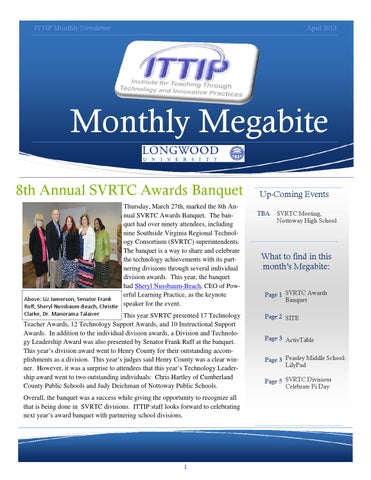 Monthly Megabite 8th Annual SVRTC Awards Banquet Thursday, March 27th, marked the 8th Annual SVRTC Awards Banquet. The banquet had over ninety attendees, including nine Southside Virginia Regional Technology Consortium (SVRTC) superintendents. The banquet is a way to share and celebrate the technology achievements with its partnering divisions through several individual division awards. This year, the banquet had Sheryl Nussbaum-Beach, CEO of Powerful Learning Practice, as the keynote Above: Liz Jamerson, Senator Frank Ruﬀ, Sheryl Nussbaum‐Beach, Chris e speaker for the event. Clarke, Dr. Manorama Talaiver This year SVRTC presented 17 Technology Teacher Awards, 12 Technology Support Awards, and 10 Instructional Support Awards. In addition to the individual division awards, a Division and Technology Leadership Award was also presented by Senator Frank Ruff at the banquet. This year’s division award went to Henry County for their outstanding accomplishments as a division. This year’s judges said Henry County was a clear winner. However, it was a surprise to attendees that this year’s Technology Leadership award went to two outstanding individuals: Chris Hartley of Cumberland County Public Schools and Judy Deichman of Nottoway Public Schools. Overall, the banquet was a success while giving the opportunity to recognize all that is being done in SVRTC divisions. ITTIP staff looks forward to celebrating next year’s award banquet with partnering school divisions.

International SITE Conference Dr. Manorama Talaiver, Director of the Ins tute, traveled to Jacksonville, Florida for this year’s interna onal Society for Informa on Technology and Teacher Educa on (SITE) conference. This year’s SITE a racted 854 people from 48 countries to a week long conference to share, learn, and collaborate on informa on technology and teacher educa on topics including any‐ thing from game simula ons, mobile learning, engaging students through 21st century learning, and Technological, Pedagogical, And Content Knowledge (TPACK). While Dr. Talaiver learned a lot at the conference, she was also able to share some of her research there by presen ng CreaƟvity and InnovaƟon in STEM Classrooms through Professional Development. During the presenta on, Dr. Talaiver shared how this professional develop‐ ment model created a culture of teacher learners who then each men‐ tored two students in being excited about STEM careers. Through pre and post tests and interac ons with teachers and students, the data collec on revealed how crea vity and innova on was nurtured in this model.

Above: Dr. Talaiver’s SITE presenta on in Jacksonville, Florida.

So ware Tools for Academics and Researchers (STAR) is a program developed to assist with scien fic research in the classroom. The website has several educa onal tools that were collabora vely developed by professionals in various educa onal ins tutes and MIT departments including Biology, Physics and Engineering. The resource consists of free downloadable so ware including videos, user manuals, sample exercises, instructor informa on and more! They vary from gene c simulators to an open source cluster-compu ng toolkit for Amazon’s Elas c Compute Cloud (EC2) . Check out these resources to see how they may assist your classroom needs: h p://star.mit.edu/

ITTIP Visits Longwood’s Speech, Hearing and Learning Services Monday, March 24th, ITTIP STEM Specialists visited Longwood’s Speech, Hearing, and Learning Services (SHLS). The visit included a one‐hour training session on using the Promethean Ac vTable. The Promethean Ac veTable is a mul ‐touch interac ve table that allows up to six par cipants a collabora ve approach to learning while promo ng engaging group learning ac vi es. The Ac vTable had been previously housed at ITTIP’s South Boston oﬃce as a demonstra on project. ITTIP Director, Dr. Manorama Talaiver, reached out to Dr. Lissa Power du‐Fur, Director of SHLS and Professor, Graduate Coordinator of Communica on Sciences and Disorders (CSDS) to see if there was an inter‐ est in the opportunity to keep the Ac vTable at their facili es. This collabora‐ on would enhance the graduate student’s learning in their department and would facilitate the learning needs of their clients. Without hesita on, Dr. Power du‐Fur took Dr. Talaiver up on this opportunity. As part of the training, par cipants learned various tools, ac vi es, and re‐ por ng features of the table. The audience involved faculty from the CSDS department, including supervisors and graduate student/assistant. Par ci‐ pants also learned about diﬀerent ways the interac ve table could be used by their graduate students and clients. They also learned about an online tool to make and upload their own ac vi es through Promethean Planet. “The learners were very excited about the ac vi es and how to best u lize this technology,” said Stephanie Playton, ITTIP STEM Specialist. The SHLS has plans Above: Par cipants learned how to to roll out the use of the table so that their experiences can be documented to use the Ac vTable through pre‐ ensure best prac ces. loaded ac vi es.

Gloucester County: Peasley Middle School Uses LilyPad After School In the Fall, STEM Specialists of ITTIP did a workshop on e‐tex ling with the LilyPad Arduino as part of the VA STEM CoNNECT collabora on at William &amp; Mary, including addi onal partnering universi es. During the two and a half hour hands on session with take home kits, par cipants voiced their interests in having an opportunity like this for their own students. Dr. Manorama Talaiver, ITTIP director, immediately saw this as an opportunity to recruit more students into the HP Catalyst grant project. Gloucester County’s Peasley Middle School’s teacher, Con nued on page 4

Gloucester County (continued) Kay Benne , immediately took Dr. Talaiver up on the opportunity and began ask‐ ing ques ons. It was soon a er the conference that Mrs. Benne began corre‐ sponding with ITTIP regarding this opportunity for students in her school division. Mrs. Benne was able to recruit twenty middle school students for an a er school program that ran over a course of three months. The group consisted of both girls and boys in grades 6‐8. Through this experience, student par cipants took part in the engineering and design process to create their computerized tex les. As part of this collabora on with ITTIP and the HP Catalyst grant project, Gloucester County Public School’s facilita ng staﬀ also held an informa on mee ng for par‐ ents who had children par cipa ng in this a er school ac vity, documented the student impact through pre and post tests, submi ed teacher reflec ons and tes‐ monies, and celebrated the comple on of the student projects. ITTIP has been excited to learn about the posi ve impact and outcome of the stu‐ Above: A teacher assists a student as dents involved in this project. Enabling projects that promote STEM learning and they implement their LilyPad design. interest in STEM careers is a top priority for ITTIP.

Above: Students at Peasely Middle School work during a er school hours on their LilyPad Arduino project using the engineer‐ ing and design process.

SVRTC School Divisions Celebrate Pi Day Since Pi Day is a celebra on on March 14th (3/14) around the world, ITTIP sent out an email in early March asking SVRTC school divisions if anyone was doing anything special. The Ins tute was pleasantly surprised to receive an overwhelming response of educators willing to share their stories of how they celebrated this never ending number (3.14159…..) day by integra ng it into a exci ng learning experience. Below you can find some of their pictures:

Le and Right: Several Sussex County middle school and high school mathema cs teachers took part in celebra ng Pi day by crea ng visual representa ons, including some with food. Right: In Hopewell County, the chil‐ dren in Mrs. Gates 5th grade at CPO class at Dupont Elementary School watched a video of over 10,000 Dom‐ inos with a Pi symbol falling on Flo‐ cabulary. The video also gave infor‐ ma on about Pi. They then figured the area, circumference, radius &amp; diameter of their paper plates and four flavors of pie.

Bo om Right: In No oway County, Pi Day is a big event at the Middle School involving the en re student body. The event started on Thursday, March 13th, with an a er school event in‐ cluding a pie ea ng contest, Hula Hoop contest and crea ng a Pi banner. This year’s t‐shirts read TGI PI, since Pi Day was on a Fri‐ day. On Pi Day, each teacher had dbits inserted into every class peri‐ od. Since it was a cross‐curricular event, English classrooms read “Sir Cumference and Dragon of Pi” or wrote Pi-Kus. Science clas‐ ses watched a short video on Albert Einstein (since Pi Day is his birthday), Social Studies classes watched a historical video on Pi Day and Art classes created ar facts encompassing a circle. Alt‐ hough many were involved, Judy Deichman, Media Specialist, takes a huge part in planning this collabora ve event.

This is the Institute for Teaching through Technology and Innovative Practices (ITTIP) April 2014 newsletter. 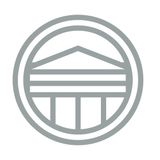