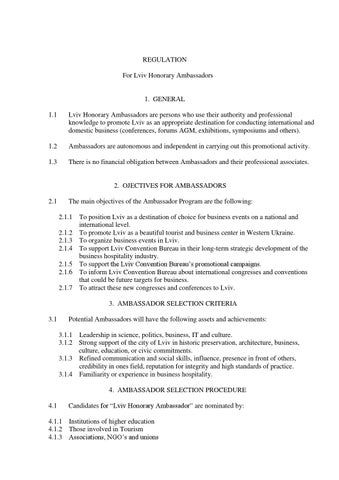 Lviv Honorary Ambassadors are persons who use their authority and professional knowledge to promote Lviv as an appropriate destination for conducting international and domestic business (conferences, forums AGM, exhibitions, symposiums and others).

Ambassadors are autonomous and independent in carrying out this promotional activity.

There is no financial obligation between Ambassadors and their professional associates.

Potential Ambassadors will have the following assets and achievements: 3.1.1 Leadership in science, politics, business, IT and culture. 3.1.2 Strong support of the city of Lviv in historic preservation, architecture, business, culture, education, or civic commitments. 3.1.3 Refined communication and social skills, influence, presence in front of others, credibility in ones field, reputation for integrity and high standards of practice. 3.1.4 Familiarity or experience in business hospitality. 4. AMBASSADOR SELECTION PROCEDURE

Candidates for “Lviv Honorary Ambassador” are nominated by:

4.1.1 Institutions of higher education 4.1.2 Those involved in Tourism 4.1.3 Associations, NGO’s and unions

The Lviv Convention Bureau solicits nominations annually prior to September 1 via mass media appeal and letters. Nominations need to be submitted within two months of these appeals in an application supplied by the Convention Bureau. The Convention Bureau then compiles a list of nominees. Selection of the winning candidates is made within one month after receipt of applications. This is done by a special board or Commission, comprised of:

4.5.1 Director of the Lviv Convention Bureau and an associate 4.5.2 Director of the “Mayor’s Administration” department 4.5.3 Two members of Institutes of Higher Education in Year I and thereafter, by 2 former Ambassadors 4.5.4 Four representatives from the Lviv business hospitality industry 4.6 4.7

The Chairman of the Commission is the Director of the Lviv Convention Bureau. Once this board is formed, it elects a secretary. After reviewing the candidates, the Commission elects 12 Ambassador finalists, via open vote ruled by simple majority. The secretary puts this in a special document signed by each member and sends it to the mayor for approval. The mayor may choose to request revisions, but ultimately provides final approval. The 12 Ambassadors should represent fields as follows: 40% science/60% all other per section 3.1.1. Winners of “Lviv Honorary Ambassador” are sent special proposals signed by the Lviv city mayor. Once each winner approves this proposal, he/she receives the official designation of “Lviv Honorary Ambassador.” The Lviv city mayor hosts a reception to honor the new ambassadors, held within 3 months after selection. The title “Lviv Honorary Ambassador” is held for two years’ time. An ambassador can be stripped of his title by the Commission in the case of:

4.13.1 Actions that defame or discredit his or her status 4.13.2 Unlawful actions that are confirmed by lawful proceedings. 4.14

Once information is obtained that the Ambassador’s status is in question, the Commission evaluates the information and may decide to vote to strip his title. A simple majority determines the outcome. The Ambassador may also choose to resign through official notification of the mayor or the Lviv Convention Bureau.

5.1.1 Enhanced personal reputation nationally and internationally through participation in advanced business events. 5.1.2 Enhanced recognition of ones professional sphere, especially relevant in lower profile endeavors. 5.1.3 Satisfaction and credit for helping to build Lviv as a business destination, through attracting national and international colleagues to Lviv. 5.1.4 Satisfaction and credit for helping to attract potential investments to the city. 5.1.5 VIP status in city events organized by the Lviv Convention Bureau. 5.1.6 Opportunity to expand professional contacts due to increased reputation. 5.1.7 Consolidation of Ambassadorâ&amp;#x20AC;&amp;#x2122;s professional positions in Ukraine and in the world. 5.1.8 Assistance from Lviv Convention Bureau during preparation and implementation of business hospitality events in Lviv. 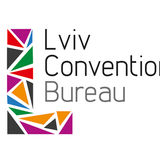