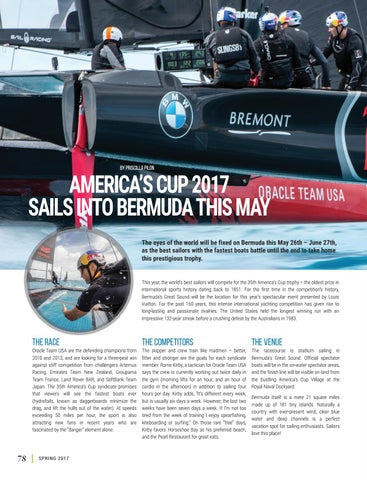 AMERICA’S CUP 2017 SAILS INTO BERMUDA THIS MAY The eyes of the world will be fixed on Bermuda this May 26th – June 27th, as the best sailors with the fastest boats battle until the end to take home this prestigious trophy. Photography: ORACLE TEAM USA - Sam Greenfield

This year, the world’s best sailors will compete for the 35th America’s Cup trophy – the oldest prize in international sports history dating back to 1851. For the first time in the competition’s history, Bermuda’s Great Sound will be the location for this year’s spectacular event presented by Louis Vuitton. For the past 160 years, this intense international yachting competition has given rise to long-lasting and passionate rivalries. The United States held the longest winning run with an impressive 132-year streak before a crushing defeat by the Australians in 1983.

Oracle Team USA are the defending champions from 2010 and 2013, and are looking for a three-peat win against stiff competition from challengers Artemus Racing, Emirates Team New Zealand, Groupama Team France, Land Rover BAR, and SoftBank Team Japan. The 35th America’s Cup syndicate promises that viewers will see the fastest boats ever (hydrofoils, known as daggerboards minimize the drag, and lift the hulls out of the water). At speeds exceeding 50 miles per hour, the sport is also attracting new fans in recent years who are fascinated by the “danger” element alone.

The skipper and crew train like madmen – better, fitter and stronger are the goals for each syndicate member. Rome Kirby, a tactician for Oracle Team USA says the crew is currently working out twice daily in the gym (morning lifts for an hour, and an hour of cardio in the afternoon) in addition to sailing four hours per day. Kirby adds, “It’s different every week, but is usually six days a week. However, the last two weeks have been seven days a week. If I'm not too tired from the week of training I enjoy spearfishing, kiteboarding or surfing.” On those rare “free” days, Kirby favors Horseshoe Bay as his preferred beach, and the Pearl Restaurant for great eats.

The racecourse is stadium sailing in Bermuda’s Great Sound. Official spectator boats will be in the on-water spectator areas, and the finish line will be visible on land from the bustling America’s Cup Village at the Royal Naval Dockyard.

Bermuda itself is a mere 21 square miles made up of 181 tiny islands. Naturally a country with ever-present wind, clear blue water and deep channels is a perfect vacation spot for sailing enthusiasts. Sailors love this place! 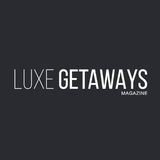 LuxeGetaways Magazine is a travel and lifestyle magazine for those with a passion to travel in style...

LuxeGetaways Magazine is a travel and lifestyle magazine for those with a passion to travel in style...