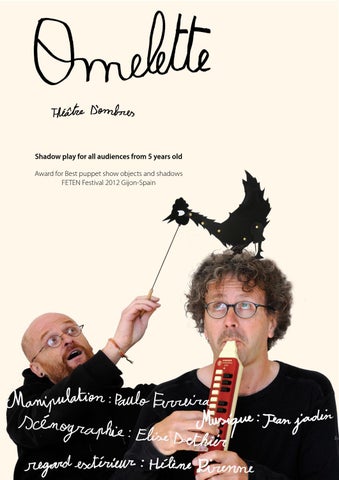 On stage In the front of the stage, there is a papered dark wall on which golden frames are hanging. Each frame has a screen where action will take place. Three frames on the left are oval, well-aligned, evoking order and symmetry. Those on the right side are rectangular and irregular, arranged in a dynamic way, suggesting imagination and freedom of movement. From left to right, one can feel a sliding, from a universe to the other one: one ruled by logic of regularity and the other one full of spontaneity. On the wall, a repetitive pattern of a light feather suggests the wallpaper. As one goes along his glance from the left to the right, the well-aligned and symmetric feathers begin scattering and seem to fly away as if blown by a light wind. About the title Omelette because it is the hen’s name, and because a lot of eggs are laid during this crazy saga (and “you can’t make an omelette without breaking a few eggs!”). Our recipe: a blend of seriousness and derision with the burlesque Clair de Lune seasoning.

The story The story tells, with an offbeat humor, the confrontation between the world of adults and the imaginary world of the child. A conservative father and a stiff mother are trying to tame their playful daughter whose only friend is a very bold hen. Each one, in his respective frame, has his own ruled life without any surprise until the child, influenced by her little friend, begins to come out of her assigned frame. The parents, without scruples, set off in pursuit of this troublemaker. A wild chase is starting in the child’s imaginary world governed by irrational rules, where everything is possible and where derision overcomes reason and humor wins prejudices. Losing their bearing in this universe, which seems so unfamiliar to them for such a long time, the parents will not come off unscathed.

About music The music holds the image, tells the story and supports the atmosphere. It was created along with the little girl narrative universe. Different sound effects, onomatopoeia, mouth sounds, breathings, cackling…Various sounds reminding us of childhood games. Repetitive rhythms surprise and engross us in a strange, funny and incongruous world, a comical and cackling universe. The material has been minimized (voice, wind, mouth and hammer instruments) at will to call the child in each of us. Process and artistic choices

We would love… This story is to be as a wind gust, raising laughter and questions. Without moral or judging vision, it reminds adults they once were children, and children not to forget their world when they grow up. As Jean Cocteau put it so well : “You will become grown-ups. Here is what’s so funny. But you must beware of staying children. Because, you will have children yourself and if you don’t stay that way, you won’t be able to understand them and they won’t understand you either”.

The idea of this show comes from the will to tell the journey of a little girl who dares living her life and her dreams. The choice of an audacious feminine character was essential: a heroine who despises the clichés of scathing pink princesses. The script writing, in the visual search, allowed funny situations to emerge and a more precise definition of the characters. Therefore, the music, inspired by the image, could easily find its place, ending up in a logical universe. The choice of our company to tell stories without using words, encourages us to create figures which are very precise in their actions in order to improve the nonverbal language. The cardboard cuttings, movements and postures must be very expressive to allow a clear understanding of feelings and emotions each character wishes to express. Music and image are used as the favorite ways of narration.

Paulo Ferreira Born in Portugal, Paulo Ferreira lives in Brussels for many years where he has studied illustration, comics and clown art. His will to create a shadow theatre comes from his love of puppets and the deep admiration he has for Lotte Reiniger, a german director of silhouette cartoons. His first steps in shadow playing is the adaptation of a tibetain tale called The life of Guésar de Ling. In 1990, Clair de Lune Théâtre is created. Thereafter, he creates the following plays: The Nightingale and the Emperor, Dances, The Circus is here, Dride and the magic Jewel, and in 2007, he imagines a Cyclo-theatre where he plays The Fancy Boutique, Pretence. This ingenious little moving castle enables him to go from festival to festival throughout Europe. Jean Jadin Born in Brussels, Jean Jadin is a pianist, composer and improviser. He collaborates with many ensembles and plays together with well-known figures such as Jacqueline Bir as well as opera celebrities like Laure Delcampe or Dominique Corbiau. He performs in international festivals as Ars Musica in Brussels or The Festival au Carré in Mons. He signs decorative music for the radio, and is also arranger and director for many theatre projects for all public and among others for the Clair de Lune Théâtre and the Compagnie de l’Ombre. As a composer, Jean Jadin particularly appreciates chamber music but he also writes scores of vocal plays. As interested in ethnic music, he wants to be a spokesman for popular and accessible music.

Hélène Pirenne Born in Liège Hélène Pirenne is a theatre actress and director. After her license in scenography, she attended the creative physical theatre work at the Lassaad School in Brussels. Her company, called “Le Théâtre du Sursaut” is specialized in visual scenes for all age groups. She’s working on physical theatre (burlesque, masked, non verbal) as well as “crafted theatre” (animated shapes and objects theatre). Besides, she works as a director for other companies. Elise Dethier Born in Brussels, Elise Dethier has studied set design (scenography) in the Académie des Beaux-Arts in Liège and got graduated in urban and rural spaces in the ENSAV La Cambre. From 1997, she goes on training courses and professional experiences in different companies as the Arsenic, Biloxi 48, Le Public theatre, and the Opéra royal de la Monnaie. She directs La Boutique fantasque (the fancy boutique) and Faux-semblants (Pretence) for Clair de Lune Théâtre. 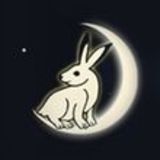