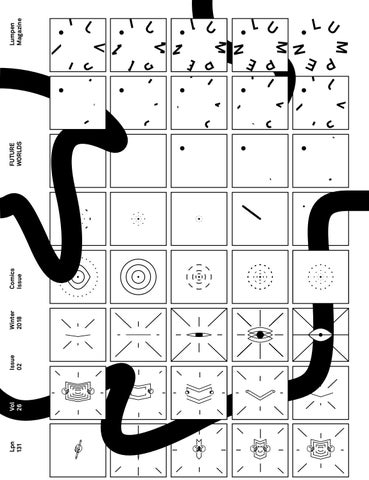 For the fourth all-comics issue of Lumpen Magazine we have asked the artists to consider the loose theme of “Future Worlds”. I’m happy to present what I think is our greatest and most unconventional issue yet. Making comics takes an immense amount of concentration, time, and creativity. I’d like to thank all of our contributors for putting forth the effort to be a part of the issue. Presented here are a sequence of vignettes that offer peeks into these future realms that the artists’ have imagined. Considering the current socio-political situation I expected much darker divinations of what lies ahead for us as a civilization, but instead we have compiled a colorful landscape that feels genuinely hopeful while representing the diverse surrealist weirdness that Lumpen comics have celebrated since the beginning. Everyone represented here are people that I have come to realize as incredibly dedicated to their craft whether in comics or elsewhere. I am glad to watch this evolution in our community over time, and see how much better and also how unorthodox the artwork has become since the first comics issue that was itself largely an experiment. I like thinking that this vision of the future will be accurate in the fact that having unique and unusual ideas are encouraged to the point of becoming what is customary. Hopefully you can enjoy giving your eyeballs a short break from your VR headset and enjoy this increasingly coveted physical imprint.

CHema Skandal! CHema Skandal! draws, paints, prints and slaps stickers as a therapy. He was born in a shithole country but now he knows the most sophisticated civilizations of the universe. He wishes he was born in the last century Jamaica. In Kingston 10 in specific. Works on different on personal and commissioned projects. — chemaskandal.com

Anya Davidson Anya Davidson is a cartoonist, musician and host of the Mindkiller podcast. She lives and works in Chicago. — anyaisdead.tumblr.com

Austin English Austin English is a cartoonist living in Brooklyn. His most recent book Gulag Casual was published in 2016. He is currently working on his graphic novel Meskin and Umezo. — dominobooks.org

Carrie Vinarsky C Vinarsky: 35 year old (almost) Chicagoan, animal loving lady who has made for many years: images, objects, and sounds in an attempt to connect and explore the deep creative communities of Chicago.

Brad Rohloff Brad Rohloff is a printmaker, cartoonist, and publisher living in Chicago. He has been running the alt comics and artists' books publishing house Bred Press since 2014 and cohosts the performative comics reading series Zine Not Dead with Matt Davis. — brohloff.me

David Alvarado David Alvarado lives in Chicago. He mostly self publishes his work, sometimes he contributes to anthologies. Apart from comics he has contributed illustrations and art to various magazines and media outlets. He should probably run more. — hello-david.com

Eddy Rivera Ed Riv (b. 1984) is a Chicago artist working in the last days of a dying evil empire. He is available for black market illustration, tattoo, comix, and unskilled labor. Don't vote. — edriv.net / IG: ed.riv

Edie Fake Edie Fake is a queer artist and zinemaker living in Los Angeles. He was awarded one of Printed Matter's first Awards for Artists and his book Gaylord Phoenix won the 2011 Ignatz Award for Outstanding Graphic Novel. His most recent publication, Memory Palaces, showcases drawings of brightly reimagined building facades depicting vanished queer and feminist spaces from Chicago's past as resources for the present. — ediefake.tumblr.com

Grant Reynolds Grant Reynolds has been self-publishing comics since the mid-90s. He was recently featured in Best American Comics 2017. — grantreynolds.com

George Porteus George Porteus is an illustrator and cartoonist. He lives on Chicago's lower west side with his partner and their cat. — georgeporteus.com

Ian Mcduffie Ian McDuffie: cartoonist/musician/far out. 31, capricorn, they/them/their, really liked The Revenant. Ian is the author of the webcomic FEELS and the one behind the musical group Violet Mice. — violetmice.com

Joe Tallarico Joe Tallarico is an artist and long time comics editor for Lumpen magazine. His paintings are shown in Chicago by Jean Albano gallery, and he is a co-curator at Miishkooki art space in Skokie. — jtallarico.tumblr.com

Keith Herzik Keith (Texan, former Galactic Inmate) is happily married and has a little dog. He and his wife Gina have have a band called Wet Wallet that shreds. — alamoigloo.blogspot.com

Sarah Sherman Sarah Sherman is a visual artist, stand-up comedian and all-around Gross Girl currently living and dying in Chicago. She runs a traveling freakshow HELLTRAP NIGHTMARE, that has been really freaking everybody out. — sarahsquirm.com

Sharmila Banerjee Sharmila Banerjee is a designer, illustrator and comic artist from Germany. Her work has been published in many international comic anthologies and in her self published albums and zines. After exploring Scandinavia for several years, she now returns to her home base in Berlin to fully focus on the creation of her carefully executed pencil drawings again. Follow her on: — bonejelly.tumblr.com — instagram.com/bonejelly

Krystal Difronzo Krystal DiFronzo is a Midwestern born artist, educator, and curator based in Chicago. She currently serves as Exhibitions and Programming manager for artist-led space Hume. She has a chipped tooth and a sharp laugh and cries over flowers. — toothandnail.tumbler.com

Leif Goldberg Leif Goldberg’s new book Lost In The Fun Zone will be released this spring by 2d Cloud. — nationalwastecomics.com Mary Beth Brennan Mary Beth Brennan has an obsession with stick figures. She would like to make it very clear though that she does hang around both big and small women and doesn’t care much about their weight. She also made a comic called “I Just Want to Walk Around Naked and do Whatever I Want.”

Mike Taylor Mike Taylor makes art in St. Augustine, Florida. His new book, In Christ There is No East or West, is due out on Fantagraphics Underground this year. — miketaylorart.com

Paul Nudd Paul Nudd was born in Harpenden, England in 1976. He is a prolific maker of drawings, paintings, and video art. He divides his time between Chicago and Cicero, IL. — westernexhibitions.com/ nudd/images.html

Rylan Thompson Originally from the Chicago area, Rylan now lives and works in Chattanooga, TN. He's been evolving his strange little drawings for years, most recently completing the third installment of his Spirit House series. — rylanthompson.com

Sarah Leitten Sarah Leitten (b. 1987) was born and raised in Buffalo, NY, and is living in Chicago, IL with her partner and three cats. Sarah day lights as a florist and enjoys drawing comics, gardening, canning, and collecting dolls. — sarahleitten.com

Margaux Duseigneur Margaux Duseigneur was born in Lyon (France) in 1988. After studying animation and film in college, she works as director assistant on several animation short films. She has also created several children’s books and comics, where her work developed along the lines of abstraction. She currently lives in Paris, where she helps organize the independent publishing festival (Fanzines! Festival), and works on books, self-publishing and exhibitions. — margauxduseigneur. tumblr.com

Ben Bertin Ben Bertin, aka Burn Burton, aka Ber Bentin, aka Birthday Boy, among a multitude of others, is an artist and cartoonist living in Chicago. — benbertin.blogspot.com

Allie Drew Alan Allie Drew Caesar is a cartoonist and likely fictional ghost dog. Born in Oklahoma and residing in Chicago, Allie mainly documents the history of the future under the label of Downfall Arts. Other hobbies include making armor and manufacturing bootleg toys. — downfallarts.net

Get 10% oﬀ your ﬁrst online purchase. Use discount code LUMPEN

"Ben’s musical vision covers a whole amazing sonic universe. He is, hands down, one of my favorite musicians on the planet today.” – Jeff Parker 3231 S Halsted St #222, Chicago, IL, 60608 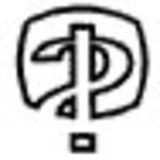 The 2018 Comics issue was edited by Joe Tallarico and designed by Jeremiah Chiu of Studio Chew. With contributions and love from these amazi...

The 2018 Comics issue was edited by Joe Tallarico and designed by Jeremiah Chiu of Studio Chew. With contributions and love from these amazi...