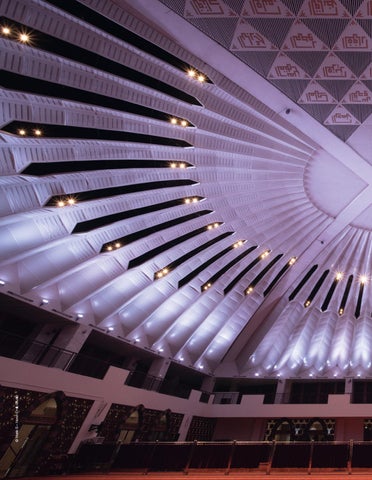 Architect Rizal Muslimin teamed up with Rina Chaerina, lighting designer at Penta Architecture, to lead the construction of the Grand Mosque of West Sumatra. This landmark building demonstrates how a dynamic lighting control system can enhance the structure’s aesthetic form and accompany religious activity – both spiritual and social.

Located in Padang, Indonesia, and completed in 2014, the Grand Mosque is the second largest mosque on the island of Sumatra. It rises from the heart of Padang, between the airport and the city center, visible from everywhere. Distance and speed determine how it’s revealed: either as an imposing modern vernacular structure when passed rapidly by car, or as an ornate building whose arabesques – Islamic calligraphy – tell approaching pedestrians that this is a mosque. The West Sumatra government reviewed more than 300 proposals from around the world before choosing Rizal Muslimin’s innovative project. He feels “very lucky” to have partnered with a lighting designer, Rina Chaerina, who understood its importance, significance and philosophy. They shared the same vision of its powerful symbolic and cultural roles. Harmonizing religion and culture The mosque’s most distinctive feature is its contemporary interpretation of the traditional Minangkabau – literally “spired roof house”. According to Rizal Muslimin: “The guiding philosophy of the brief was that religion and culture can mix and mingle together: culture needs to be in harmony with religion and religion must respect local culture. The design must merge the two”. At that time the design was controversial because it did not use the habitual islamic dome for the mosque roof. However, the jury

hearings to choose the winning project, held in the city hall., were open to the public. And it was public enthusiasm for this scheme that guaranteed it would be the winner. The design of building’s roof concept combines influences from traditional architecture, a renowned Islamic tale and local textile culture. Rizal Muslimin relates the story describing “how a twenty-something Mohammed settled the village elders’ dispute about the best way to carry the Black Stone to the current spot in Mecca: he took off his turban, put the cloth on the floor, placed the stone upon it then told them to carry it by holding the cloth’s four corners. With the turban stretched in four directions the four clan leaders were able to together carry the stone”. The cloth shape became a contemporary interpretation of the traditional roof of the Minangkabau vernacular houses for the design of this mosque. Also, cloth is linked to one of the prominent local cultural artifacts: Sumatran woven textiles, called “Songket” – one of the best textiles in Indonesia. Rizal Muslimin elaborates: “The mosque is a meeting place, not too dim, not too bright. Contemplative and social. That’s the tricky part: how to accommodate individual contemplation as well as social or religious interactions. It needs to be at the right luminance and that sort of special place between being contemplative and being social.”

The design also had to take into account the region’s seismic activity and the risk of tsunamis. Therefore the mosque was built to withstand high-magnitude earthquakes: a concrete structure that can move back and forth with the ground when it shakes, yet hold firm and not collapse. These factors combined to determine the way that the building should he lit, supporting concentration and contemplation as well as social functions related to religion. Lighting designer Rina Chaerina explains they wanted: “lighting that can complete and enhance the architectural form, from inside and outside. Lighting should also bring a solemn am-biance to prayer”. Prayer time: guided by the light The mosque’s interior ambient lighting adjusts the color themes to suit various prayer times such as red sunset for Maghrib, blue night for Isha/evening, sunrise for Fajr/dawn. Color Kinetics’ iPlayer 3 controller is used to create these lighting scenes. Two lighting solutions were applied to the main prayer hall: Color Kinetics’ Vaya Flood MP RGB and Philips’ FlexAccent Track. The flood lights placed on the three sides of the main prayer hall, are aimed so that they highlight the inner dome, illuminate the ceiling and calligraphy and reveal the enormous scale of the interior. The FlexAccent Track luminaires in the ceiling provide functional lighting to the worship area.

Rina Chaerina explains the choice of LED lighting: “LED is a modern source of lighting. Besides the energy-saving features – as compared to other conventional luminaires – LED is also easy to control, able to achieve dynamic and flexible lighting effects.” The architectural design facilitated the façade illumination, Rizal Muslimin points out: “The façade is angled, not perpendicular, so that helps. You don’t have to put too much light on it because the façade comes towards to the light. People can easily identify the curves of the roof from a distance. It has a white color that makes it even more clear at night to get that whole ‘cloth thing’.” The façade uses Vaya Flood MP RGB floodlights to focus on details. There are carved motifs taken from various Minangkabau art forms where all forms have meaning, especially the triangular shape of Pucuak Rebuang (bamboo shoots) which symbolizes aspirations to develop and advance. In addition, the sloping columns on the four sides are highlighted by narrow-beam floodlights Vaya Flood HP. Because the project uses a dynamic control system installed using Lighting System Manager (LSM) from Color Kinetics, the lighting of the mosque facade can be adjusted to suit the themes for various events-, such as red on independence days, and green for religious events A bright and vibrant space… enhancing religious activities Rizal Muslimin describes the way that light supports better concentration and contemplation as well as social functions related

The government and the local population were delighted with the mosque architecture and lighting. “None of us realized what the impact would be today! A landmark, a tourist destination, a night time attraction – we didn’t anticipate this!” Rizal Muslimin remembers enthusiastically. Night lighting is becoming increasingly important in Indonesian cities, as Rizal Muslimin explains, for security and well-being in addition to encouraging prayer and socializing withing a religious context. “In the positive sense, especially during Ramadam, they want people out of the house to celebrate religious activities. You can’t do that without lighting.” Related article Pioneer of Light Priastini Amrita ↩ page 22

to religion. «It's about making the mosque light and vibrant for religious activities at night, especially during Ramadan. It plays an active part during Ramadan because people go there not only during the day but are even more active during the night. The lighting is really important to support this and represent these activities, to show people that we also pray collectively at night, to celebrate.» 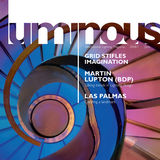 Architect Rizal Muslimin teamed up with Rina Chaerina, lighting designer at Penta Architecture, to lead the construction of the Grand Mosque...

Architect Rizal Muslimin teamed up with Rina Chaerina, lighting designer at Penta Architecture, to lead the construction of the Grand Mosque...