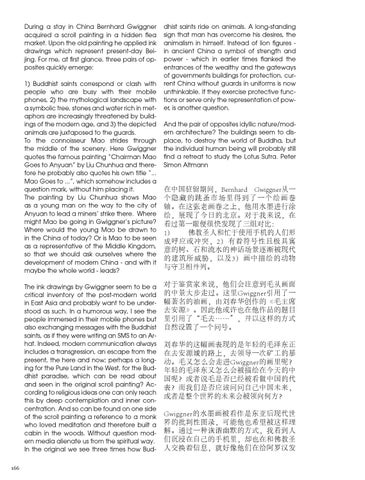 During a stay in China Bernhard Gwiggner acquired a scroll painting in a hidden flea market. Upon the old painting he applied ink drawings which represent present-day Beijing. For me, at first glance, three pairs of opposites quickly emerge: 1) Buddhist saints correspond or clash with people who are busy with their mobile phones, 2) the mythological landscape with a symbolic tree, stones and water rich in metaphors are increasingly threatened by buildings of the modern age, and 3) the depicted animals are juxtaposed to the guards. To the connoisseur Mao strides through the middle of the scenery. Here Gwiggner quotes the famous painting “Chairman Mao Goes to Anyuan” by Liu Chunhua and therefore he probably also quotes his own title “... Mao Goes to ...”, which somehow includes a question mark, without him placing it. The painting by Liu Chunhua shows Mao as a young man on the way to the city of Anyuan to lead a miners’ strike there. Where might Mao be going in Gwiggner’s picture? Where would the young Mao be drawn to in the China of today? Or is Mao to be seen as a representative of the Middle Kingdom, so that we should ask ourselves where the development of modern China - and with it maybe the whole world - leads? The ink drawings by Gwiggner seem to be a critical inventory of the post-modern world in East Asia and probably want to be understood as such. In a humorous way, I see the people immersed in their mobile phones but also exchanging messages with the Buddhist saints, as if they were writing an SMS to an Arhat. Indeed, modern communication always includes a transgression, an escape from the present, the here and now; perhaps a longing for the Pure Land in the West, for the Buddhist paradise, which can be read about and seen in the original scroll painting? According to religious ideas one can only reach this by deep contemplation and inner concentration. And so can be found on one side of the scroll painting a reference to a monk who loved meditation and therefore built a cabin in the woods. Without question modern media alienate us from the spiritual way. In the original we see three times how Bud166

dhist saints ride on animals. A long-standing sign that man has overcome his desires, the animalism in himself. Instead of lion figures in ancient China a symbol of strength and power - which in earlier times flanked the entrances of the wealthy and the gateways of governments buildings for protection, current China without guards in uniforms is now unthinkable. If they exercise protective functions or serve only the representation of power, is another question. And the pair of opposites idyllic nature/modern architecture? The buildings seem to displace, to destroy the world of Buddha, but the individual human being will probably still find a retreat to study the Lotus Sutra. Peter Simon Altmann 5th catalog of the Austro Sino Arts Program published in 2013 with accompanying exhibitions in Chongqing and Ningbo, China. Edited by Lukas...

5th catalog of the Austro Sino Arts Program published in 2013 with accompanying exhibitions in Chongqing and Ningbo, China. Edited by Lukas...