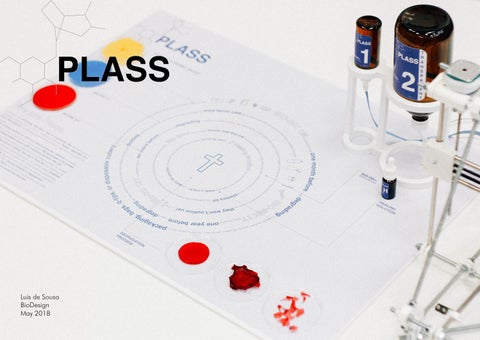 The BioDesign Challenge course was focused around materials. It considered how design could bring innovation through the use of bio-related materials. In our group project we developed Plass, a fictitious company that manufactured 3D printed agar-based biodegradable plastic with embedded bacteria, Bio-Ink. After a planned amount of time, the material would start decomposing, or the process could be accelerated should the object break, thus exposing the internal bacteria to open air. The motivation behind this concept comes from our current reality of landfills and plastic waste imports1. In that sense, it is imperative that we stop producing non-degradable materials. Our responsibility towards our planet should not only come from our consumption behaviours, but actually start with our production methods. 2

At the start of the project, I attended a talk by Oron Catts and Ionat Zurr, in which they presented their practice and how it evolved from the mid1990â&amp;#x20AC;&amp;#x2122;s through to our present date. During the event, I was struck by the controversy around the â&amp;#x20AC;&amp;#x153;killingâ&amp;#x20AC;? of their project Victimless Leather2 at the MoMA in 2008. It surprised me to see how people were affected by the death of a lab-grown living material, when so many living beings are killed everyday for different purposes without necessarily raising ethical concerns. A few days I later, during a lecture on her book Synthetic Aesthetics3, Jane Calvert talked about the concept of living machines and how these could adapt and evolve over time, similarly to any other living-being. These two events made me consider how, in spite of our natural cycles of life and death, we tend to surround ourselves with non-animate artefacts that not only outlive us, but may also preserve its nature for eternity, thus becoming immortal. Victimless Leather at the MoMA in 2008

This consideration was the base for our initial idea: to design a material that dies. Initially it sounded somehow controversial, however in the light of our current global production methods and excessive use of plastic, it made sense to develop a material that perished after it fulfilled its purpose. Addressing non-degradable waste and materials is not something new, in fact, many designers reuse plastic waste into new forms of material, such as in Neill’s Gyro Table4, or Starck’s Broom chair5. While such design proposals are valuable, they fail to address one key issue: to not produce any permanent waste at all. On another perspective, introducing death to living materials, and consequently to the products they compose, could raise questions. What kind of products would be produced? When and how should they die? Do they have a life expectancy? Are they effectively “killed”? If so, who pulls the trigger? What are the social and ethical implications around it?

Plastic Floating in the Ocean

Developing an opportunity In order to respond to the questions raised previously, we sketched different scenarios where our material played the central role. This exercise allowed us to not only to gain a richer context and comprehend eventual associated implications, but also to understand the materialâ&amp;#x20AC;&amp;#x2122;s lifecycle. Simultaneously, it also made us question user-interactions with living objects. As humans, we tend to develop certain emotions towards our possessions, despite their evident inanimate nature. How would such relationships be affected once our things gained real life? Would we develop a sense of responsibility, respect, perhaps even care?

Growing Fields of the Material

From the different sketch explorations, we were able to determine aspects that needed to be taken in consideration, particularly around the matter’s lifecycle. This led us to focus around the growth, life, and death of the material. We started exploring an idea where we could develop the tools to grow the material, maintain it during its lifecycle, and finally assure its death and disposal. From that perspective, users would perform different rituals to cater for their objects. In order to explain our idea, we concentrated on the narrative of death and developed a coffin with an embedded “kill” button. Users would dispose of their objects once they were no longer needed, and the use of the machine would become almost ceremonial. Concurrently, it would also accelerate the materials’ disintegration.

The feedback about the coffin was that its concept resembled a compost methodology, which was already widely explored by other designers in previous competitions. We also had a substantial problem: our process was aiming at growing the material until it reached a certain requirement, but it would then be “killed” to be used as an artefact. In that sense its death happened during the early stages, and therefore it would only be an inanimate biodegradable object.

This realisation made us redefine our idea, and explore ways to keep the material alive during its lifecycle. At that stage we started exploring the possibility of resourcing to Quorum Sensing6. This mechanism allows bacteria to emit certain signals when they are available in high density, thus replicating a similar behaviour in the culture. In other words, we could develop a material containing bacteria that at a certain stage could signal its own death. We could either manipulate the bacteria to trigger the signal after a specific amount of time, or upon change in its environment.

The problem with using bacteria as a material was that it is normally hosted in a liquid environment, and therefore would need to be mixed with another ingredient if we were to generate solid forms. While looking at hydrogel solutions, we discovered that the MIT Self-Assembly Lab7 presented a prototype of a 3D printer that worked with a liquid ink inside a hydro-gel container. This process allowed the liquid to retain its shape, and once dried it could be simply removed. Furthermore, we also uncovered that researchers at ETH Zurich8 developed a 3D printer ink that contained living bacteria. It had a hydro-gel substance and could be used to breakdown toxic substances, or produce cellulose. With this last finding we understood that we could do the exact same, however reverting the process: develop an agar based bio-ink that is eaten by the bacteria it hosts after a certain amount of time.

Prototyping In order to define a context where our material would exist, we started speculating on a near future scenario where 3D printing becomes the main mass-production methodology, and home printers a reality. We imagined ourselves as the inventors and brand owners of a company called Plass, that manufactures bio-inks for the industry as an effective alternative to plastic. The idea was to provide the industry with the agedependent material, and develop a home line that was triggered whenever the bacteria was exposed to air, like a crack. Initially we considered representing the prototypes through material samples, examples of how they could be applied, and an object decomposing. In order to understand the materiality of the agar-based bioplastic, we also produced some home-made samples. This process gave us a deeper insight on what the material looks like when it starts decomposing. We also needed to define how the home printing would work, and how we could print bacteria embedded in hydro-gel without exposing it to air. We decided to separate both matters, and redesign a double needled nozzle that could be applied to any home-based 3D printer.

For the final product we developed samples for each of the different timebased materials, along with the HomeKit consisting of the Hydro-Gel, Bio-Ink (bacteria), healing solution (for unexpected cracks), stand, and universal nozzle. We also developed three samples of the material that demonstrated the different stages of its decomposition. Finally, for the presentation, we developed samples with the real bacteria inside them.

Conclusion The Bio-Design Challenge was a type of project that needed more time and dedication than what was given. It had the potential to be one of the most pertinent projects in the whole programme, especially since it was part of such a large international competition with many prestigious institutions. Nevertheless, there a was certain lack of organisation at times, and even a certain lack of support, especially in terms of tutorials, which we only started having towards the end of the project. Similarly, we had too many talks. While these were valuable in the beginning of the project, they no longer made sense after a while. They took valuable time that could have been used into the studentsâ&amp;#x20AC;&amp;#x2122; projects during the scheduled three weekly hours. This time would have been crucial to develop a small studio-culture amongst the class, where groups learnt and benefited from each other. We were naturally separate groups, as not only we were doing different courses, assessed in different ways, but also in different buildings in opposite parts of the city. Having a dedicated time with the class as whole, would have generated a stronger bonding amongst the peers and a more fruitful exchange of ideas. This said, I still believe that this is a very interesting project with an enormous potential. It brings relevant perspectives on how contemporary design might evolve. 16

nly be used once, and knowing s can o that t thing hey e m will . So

on rely can we ow kn to od go

dropped you ve you ro b . Ha j ect an dm

mers to store, use and r e-use s consu allow them bef ore it