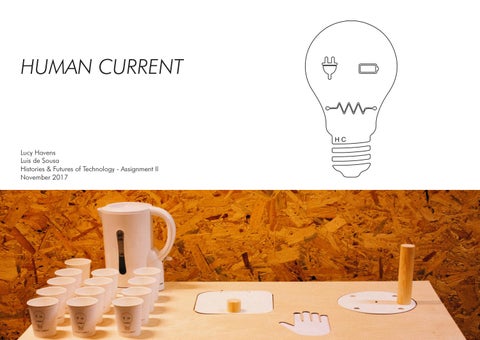 Overview of the Technology Probe

Human Current tackles the idea of people harnessing energy to power a device through motion. We equipped our technology probe with three sensors that control a kettle, and asked participants to boil the necessary water to make a cup of tea. We placed the probe in the Design Informatics studio where we could access technical resources and also guarantee that many peers could easily try the probe.

Overview of the Probe 2 Context 3 Opportunity to Develop

While discussing questions we could explore with a technology probe, we identified two areas of mutual interest: encouraging sustainability, and bringing attention to something ubiquitous yet unseen. People cannot easily see comprehensive information about the energy they use over the course of an entire day, so we began brainstorming ideas for a technology probe that would make energy usage visible. We were particularly interested in providing an experiential communication to contrast with the monetary and graphic communications we see on utility bills. Two questions emerged to us: Question 1: Could a person generate enough energy while carrying out familiar, daily activities to power her or his lifestyle? Question 2: How much would a person need to change her or his behaviour to power their lifestyle solely with devices that harness energy he or she generates during familiar, daily activities? Through attempts to design a technology probe that could explore these questions, we realised a different question needed to be explored first. Even if the answer to Question 1 was “yes,” we would need to create a device that clearly indicated to users whether they were generating energy. Even if the answer to Question 2 was “minimal,” we wouldn’t know whether people would feel engaged with the energy-generating experience of using such devices.

Energy Collections3 is a project by Marjan Van Aubel that proposes glassware as photovoltaic panels to generate power.

With the two guiding questions in mind, we started analysing methods that energy companies utilise in order to inform their operation models, and also at the current reliance on renewable and non-renewable energy sources. Through this investigation, we gained a deeper knowledge about energy production and distribution models, but most importantly the waste involved in the process.

Inefficiency Machines4 by Meret Vollenweider speculates on the amount of energy required to power common devices in every household.

The Opus Oneâ&#x20AC;&#x2122;s grid1 modeling technology is one the tools that we investigated. It gives grid operators more visibility into power flows

We also had to understand how the creative industries respond to energy issues, we looked at projects that had a similar focus. We uncovered designers and artists that developed exhibitions and artefacts that raised awareness of energy waste in our daily life, but also presented innovative and speculative ways of generating power. Electricity Map.org2 is an interactive map that allows users to see how much countries rely on renewable/nonrenewable energies. 4

These findings led us to research companies and products that use human motion as an energy source.

Max Donelan’s Knee Power5 is a product that generates energy simply by walking.

At this point we could understand the limitations of human-generated energy, and how it could work on a larger scale, such as powering a building with many people using gym machinery, and also on a smaller scale, such as charging a mobile with the energy produced by an individual. With the information gathered we started considering possible ideas for our probe: • A pop-up café where people could buy drinks with energy they generated (for example, those who took the stairs to the café could buy a drink with the energy they generated by walking; if someone took the elevator, they could only buy a drink with money) • A room in which lights would power on if people generated energy in the room • A series of interactions that would give people distinct ways to use and generate energy, ending with a receipt people could take communicating the energy they used and generated We continued proposing technology probe ideas while researching ways others had sought to communicate energy usage information. However, this exercise made us wonder how people could interact with these harnessing methods in a near future. This led us to our main concept: develop a probe that provides users with different ways of generating energy to power a device, and concurrently collect data about the generation methods preferred by the audience.

The Green Microgym6 in Oregon has its specialised gym machines that generate power from its users.

Design Methods Understanding Human Interaction Human-powered devices such as torches, radios, or bike lights usually involve a spinning wheel connected to an electric generator, such as a dynamo. As these are widely known objects, the practice of spinning a wheel to manually power a device becomes a familiar action to most users. As we worked with more advanced technologies, we envisioned alternative interfaces to gather energy, such as sound, touch, vibration, or simply walking.

Understanding the Technology We designed our technology probe around three principals from Hutchinson et al.,7 adapted below to the energy-generating context of this project. These principals became: 1. Simulate viable sources of energy generation 2. Record data about how people generating energy with our probe (even if the probe did not actually harness the energy generated) 3. Imitate familiar activities, so the insights we gain when people use our probe are relevant to daily activities in peopleâ&#x20AC;&#x2122;s lives

The table below summarises our evaluation of the hardware available to us against each of Hutchinson et al.â&#x20AC;&#x2122;s principals. We concluded that the motion sensor, touch sensor and Arduino Uno were our most viable options.8-14

*The motion sensor reliably detected whether or not motion was being produced; it did not detect the amount of motion produced. **The touch sensor was the closest sensor we could create or obtain to real-world sensors that detect motion on a minute scale (for example: vibration produced when walking on a path, typing on a keyboard or blinking). ***The Arduino YĂşn must be connected to wifi to gather data.

Defining The Probe With an understanding of the technology, we opted for three interactions that could generate energy and provide us with reliable data: â&#x20AC;˘ Spinning: alluding to energy production with a dynamo and familiar activities such as riding a bike â&#x20AC;˘ Vibrating: alluding to actions that produce a vibration such as opening and closing a door â&#x20AC;˘ Pressing: alluding to the thermoelectric generators, using body heat as an energy source We created a wheel, a lift, and a hand to gather data about each of these interactions, respectively.

Prototyping While developing the concept, we considered having the users charge their mobiles through our probe. However we would either have to offer a variety of chargers, or exclude users who donâ&#x20AC;&#x2122;t have a device that could use the charger weâ&#x20AC;&#x2122;d provide. Insetad, we opted for a tea kettle, as preparing tea was not only a common daily activity, but also would give users a takeaway, a physical representation of the energy they generated. It was imperative to associate our probe with a familiar activity so we could investigate how our technology fit their daily lives.

Code After deciding on the three interactions for our probe, and on the viable hardware, we created the final code file that enabled us to record, organise and analyse data produced when people use our technology probe. We adapted publicly available code for the Grove Motion Sensor, the Grove Relay and Arduino Uno.9 The code file works with the physical construction of our technology probe to:

Branding We incorporated a logo on our probe, as to make the probe recognisable on the cups people could takeaway. People could identify where those cups came from, and perhaps attract others to our probe.

The branding of the technology probe was adaptable to the physical materials, the video explanation, and this digital report of our technology probe. The energy imagery, white and natural colours, and simple line drawings were adequately flexible to use in each context.

To continue investigating how people could generate energy to power their lifestyles, and to imropve upon the aspects of the probe that didn’t work, our next iteration of the technology probe would:

The functionality of the probe worked well for most users. We were able to collect data from all three interactions: the wheel, the lift and the hand. The data our probe collected clearly indicated which of the probe’s interactions was in use. Each sensor wrote distinct numbers into the file to differentiate periods of energy generation from periods of no energy generation.

• Provide a verbal or written explanation of our energy-generating goal to people before asking them to use the probe • Strengthen the interactions of the probe with additional screws • Collect time-stamped data so we could analyse usage duration • Video-tape participants using the probe so we could review the sensor data in the context of people’s energy-generating behaviours Additionally, we could create a competition with our probe. One participant asked us, “Who won?,” indicating an interest in knowing how much energy he generated in relation to others. Challenging people to generate as much energy as they could in a set period of time, and displaying how a person’s energy generation ranks among other’s, could change the way people interact with our technology probe.

The aesthetic did not adequately communicate the association of the activities we asked people to execute with energy generation. In an effort to prevent distorting the lives of our probe’s users with our presence as designers, we tried to give people the opportunity to interpret the probe on their own. Conversations with the probe’s users indicated that people did not realise from the presence of the tea kettle that they could generate the energy needed to prepare a cup of tea. While the probe was in use, we had to reinforce the wheel onto the base of the technology probe once, we had to reattach the lift’s knob once, and we had to reattach the wheel’s handle twice. The data did not provide clear indications of how usage of our technology probe varied from one person to another. We observed that some people didn’t generate energy with our probe long enough to heat the tea kettle. Our code associated sensor detection with the time the tea kettle turned on or off. Consequently, we could distinrguish probe users by the twoand-a-half-minute period needed to heat the kettle.