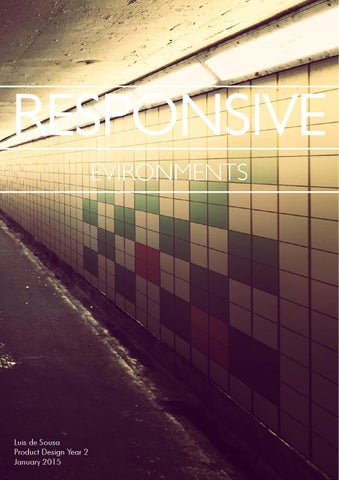 What if you became friends with a tile?

Introduction The project Responsive Environments focused on small interventions that change our interaction or perception in a certain moment or task in a specific space. Using the knowledge acquired in the previous Arduino Workshop, we would need to come up with an interactive product. The brief asked us to identify a mundane moment and improve it or make it more interesting, using Arduino or a similar technology. The final prototype needed to be fully functional and therefore demonstrate the experience designed. The project was divided in four parts, starting with the initial ideation, which then evolved into early concepts and finally into a final one, that would represent our moment of intervention. For this project we were divided in groups of two, and for our work, Laurence and I chose the moment when people walk through tunnels, how they can be intimidating or simply annoying, as they are nothing more than a passing area that generally does not stay in peopleâ&#x20AC;&#x2122;s thoughts for long after they crossed it. They also reinforce negative feelings, such as violence, fear or insecurity, often associated with dangerous places to be avoided. With that in mind, our focus was to improve that moment; to get a person interested in crossing a specific tunnel, to make the individual excited about the possibility of taking that direction. In our project we ended up not resourcing to Arduino, but to Scratch instead, as it would allow us to project our proposal in a wall and generate a full-scale experience.

Life in the City

Initial Investigation We started by thinking about daily activities, and for that we looked at how a typical Monday was in our lives. Whether if it is showering, cooking or commute from A to B, we all perform the similar tasks that become such a part of our routine that are almost ‘invisible’. We don’t walk thinking constantly that we are walking, or we don’t even notice the landscape around us on the train or the car. When we started exploring things in that direction, we quickly realise that we’re constantly performing some kind of task, and therefore there would be room for many opportunities. Our focus quickly shifted to outdoors moments, and we had several different ideas: a pavement that lights up when people walk on the stone blocks; a square where people can leave their marks or even draw with their feet. After these initial thoughts, we found ourselves split between two potential projects: one that would pursue something related to role trees play in our daily urban lives, and another one that would focus on our shadows, that necessarily follow us around, but suddenly could have a life of their own thanks to technology.

Trees Trees play a major role on our planet, not only as massive and dense forests but also performing more urban tasks in our cities. Recent studies suggest plants have their own signalling system, and may even possess memory and emotions, and we thought it could be interesting to remind people about those characteristics. One idea was to make a tree that would sneeze and shake a few branches when someone approaches it; another one was to make a set of trees equipped with interconnected sensors, thus replicating human-like reactions whenever people passed by.

Shadows The very nature of our shadow is to exist with us. It necessarily follows us around and yet we completely ignore it and only very rarely do we remember it exists. A shadow has no life on its own; itâ&#x20AC;&#x2122;s just a projection, but what if suddenly it gained life and interacted with us? Peter Pan had one, so why canâ&#x20AC;&#x2122;t we? Our idea was to simulate a playful shadow that would interact with us in unusual ways.

Concept After our first presentation, we arrived to the conclusion that it would make more sense to follow the shadow proposal. At that moment we needed to choose a specific place and moment for that to happen. While it would not be easily made outside, due to the light and technological constraints, it could possibly be done in sheltered spaces, like a tunnel where a lot of people pass. A tunnel is not only dark enough but it also meets the necessary requirements to attach technological infrastructure. As we were further investigating our concept, we were becoming more aware that it would be very difficult to produce a shadow or an animated figure that would engage with us, as the time frame and resources were limited. We needed to come up with something that would reflect the same but simpler. How could we animate a tunnel?

In one of our tutorials we discussed the possibility of making use of the physical aspects of the tunnel, and then we realised we could use the tiles on the wall to animate the experience. A simple thing yet with a big impact: a tile that lights up and walks along and interacts with the person; a playful friend living on the walls, hidden among the tiles. We visited different tunnels in Glasgow, in order to decide the location for our project. During a visit to the Clyde Tunnel, we saw a smaller one next to it, and after evaluating the physical characteristics we decided it was good enough to in terms of its intimidating atmosphere and emptiness, which we thought would be ideal for our intervention.

Initial Prototyping After the definition of our concept we started building the prototypes. We were quite certain we wanted to build something that would almost be live scale, in order to provide the user with the full experience. We initially thought the product would be built with Arduino and motion sensors that would then connect to LED lights. We had the idea of making two cardboard walls facing against each other and then cut out some squares with the size and shape of the tiles where we would fit the LEDs. We also started imagining different scenarios with the tiles and what kind of key different interactions we could create.

In one of our technical tutorials, we were made aware of the limitation of using Arduino in our product, as it can only support ten different lights at the time, which would make our project much harder to complete. Instead we were advised to use Scratch and project onto a transparent paper wall so we could walk on the side and experience it if it were a real wall. With Scratch we had more visual liberty as we could simply project what was present on the screen and suddenly have an interactive wall. One of the things we hadnâ&#x20AC;&#x2122;t figured out by then was what would happen to the interactive tiles when different people would cross each other in the tunnel. We knew that moment of two people passing through each other to be the critical point in most tunnels. While researching on tiles, I thought about the tradition of decorating architectural buildings with tiles in Lisbon. It has been a very popular technique for millennia and covers almost every building and wall. There are many types of compositions, the most beautiful and meaningful being the ones in blue and white. This technique is usually used to represent panoramic views of the city (mainly from the 17th Century when most of them were made). We could apply a similar idea to our project, however Glasgow doesnâ&#x20AC;&#x2122;t have a tile culture like Lisbon or other Mediterranean cities. After all, this project was happening in Glasgow, for Glaswegians, so we thought about recreating significant images of the city into compositions made of tiles. 17

Final Prototype Although this idea of using tiles to create compositions was appealing to both of us, we were later advised that in this case each tile would cease to be a single pixel, as many colours and shapes needed to be displayed on each on of them, for the sake of the composition itself. In the end, we decided to abandon this idea to focus on the stronger concept of tiles as individual pixels. Whenever we think about pixelated images we think about retro games and then we thought about using those walls to display little games whenever people cross. Such experience could be fun, yet fast enough for people to fully appreciate it without spending much time and visible to someone close enough to wall, unlike the previous idea.

WALL-CADE In a first situation of two people coming in opposite directions, a Tetris game is displayed when the tiles collide.

In a second situation of two people moving in the same direction, a Chess game is triggered when the tiles collide.

In a third situation of three people crossing at a same point in the tunnel, a Four-In-A-Row game is simulated on the wall. 23

Video The video narrates the story of a person entering the tunnel and noticing that someone is entering at same time from the other side, which doesnâ&#x20AC;&#x2122;t make him very confortable. Once he enters the tunnel he is surprised by a tile that lights up next to him, and then inside the tunnel the three experiences are shown. After leaving the tunnel he looks back and goes on his way with a smile on his face.

Conclusion This project had an open brief giving us a lot of freedom in terms of processes and approaches to include in our design process, but also making it harder to define ideas and a concept, mainly due the lack of guidelines. Despite its difficulty, it was an exciting project as we could actually build something supposed to be fun and that would not only work, but also interact with us. Finding ideas that could lead to a final concept was quite challenging, especially refining them until reaching something that would be doable with the technology we had available. This situation made us work on prototypes that ended up being discarded, as they would no longer be useful, but at the same time allowed us to refine a product on both a conceptual and physical level. In this, this made it very interesting. In terms of coding it required a lot of work, as I had to constantly change variables and test them in order to find the correct script to run. From a certain point of view, I feel that my experience with coding was in many ways similar to a prototype development where we keep changing it until reaching the right form. Due to software limitations, the actions the tiles would hypothetically display were constantly revised until we could find something that would work while, at the same time, being interactively engaging with the user. Since we changed it so many times, I started feeling uncertain about the product itself and had to seek advice from colleagues around us in order to test it thoroughly and see how they felt. From there, we could then be surer about how it could be improved. I can now say that I am satisfied with the outcome of the final product, yet I see this project with enough complexity and potential to keep improving until the last moment. After all, our projects never end and can be constantly changed, hopefully for the better.