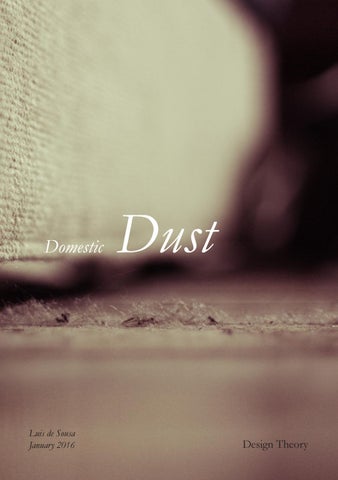 This work looks at how people interact with materials. Materiality plays a large part of the userâ&#x20AC;&#x2122;s experience with a product. It enhances our emotions towards an object, appealing to our five senses. How can material change or even determine our perception about an item? This project s about identifying a waste material and explore through the use of Material Driven Design. In this booklet, I will go through my research with domestic dust, looking at its characteristics and potential applications as an alternative to more conventional materials.

Microscope View Except for cotton, all the materials seem quite similar in terms of their macro and micro structure. The most visible was wool, however this can also be related to its darker colour.

Contact with Water I placed a sample of each material in a separate bowl simultaneously. All seemed to float, except cotton that sank instantly. After 20 minutes all of them were under water apart from the cat hair, that floated the whole time.

Initial Analysis Straining Dust comes out of the vacuum cleaner with a lot of small powder particles that need to be separated, as they are too disaggregated and too small to be manipulated. In order to achieve this, I strained it and removed the excess.

Frying Pan It stayed intact for a long time until it finally emits a burnt odour. It never generated any flames nor dit become too hot to touch it.

Contact with Fire After trying to fry the dust, it made me wonder if it could have a certain inflammable property. I set it on fire and it instantly went on flames spreading a strong smell. It proved to be as flammable as any other fabric.

Blender Blending dust was very messy as expected, which created a lot of dust powder. It did not seem to produce any relevant effects on the material itself.

Applying Colour Using pigments, I tried to dye samples of the material. The colours came from red, blue, yellow and green Moroccan pigments. Dust itself is quite dark but it incorporated the colour easily. The samples stayed soaked in the solution for around an hour. After drying, they no longer looked like dust, but rather hair or fabric.

Bleaching In this case, rather than adding colour I tried to bleach it out. It stayed immersed in bleach for around 6/7 hours and was washed afterwards. It gave the sample a lighter colour but not as light as I was expecting.

Mixing Wax I poured hot wax on a dust sample placed in a bowl on boiling water. With the expectation of keeping it at a warm temperature I tried to mix it. It dried fast and became very hard, thus making it difficult to manipulate.

Boiling After straining a bigger sample, I boiled for 20 minutes. There was a certain smell, but the result after drying was better than when I soaked it in cold water. The material was more condensed, feeling stronger at touch.

Carding Due to its similarity with natural fibre, I tried to card the sample with the help of two hair brushes rubbing against each other. It removed even more dirt than washing or even boiling, yet I believe it would have been more effective with carding brushes. In the end the dust was looser and softer than before.

Carolâ&#x20AC;&#x2122;s Dust This dust is from my friendâ&#x20AC;&#x2122;s flat. She doesnâ&#x20AC;&#x2122;t have any pets, which explains the brighter colour when compared to mine. Similarly to mine, the main ingredient is hair, however this time it is human and longer. The purpose of this sample was not only to see the differences between her dust and mine but also to test how people react to their own dust against others.

User Testing I started by asking the participants to close their eyes while I passed samples of the different materials around. The reactions were quite similar despite of the sample as they knew in advance that there was dust involved. Except for one - that recognised cotton - the others could not identify the samples. I then asked them to open their eyes and explained each one of the samples. They found it a little repulsive, especially due to the amount of hair in some of the samples. The bleached one seamed to creative a more positive impact due to its lack of germs and hackers, killed during the process. It also did not create any allergic reactions, like the others did. Afterwards I proceeded to show the coloured ones that did not provoke any sort of disgust, but rather curiosity. Despite knowing it was dust, it had a colour that seemed to mask its true nature. Their advices were to bleach it always to remove allergens and hackers and to remove or hide well the hair. They especially liked the coloured samples and if they had seen it separately they would have assumed it was fabric. According to the group, this material could be used as a fabric alternative or maybe as paper fibre.

Potential Developments I Taking in account the groupâ&#x20AC;&#x2122;s feedback, I tried to make paper machĂŠ with the material. I started by blending the dust with boiling water, which was then mixed with PVA glue and toilet paper. I added more glue or water as needed. I then spread the material and passed itwith a rolling pin. I left it to rest and dry between two heavy wooden boards for 24 hours. The result was similar to a plant based paper type, however it was very thick as I needed special tools to make it as thin as regular paper.

Potential Developments II Another suggestion was to generate fabric from the material. This was also something that I identified during the initial experiments. In order to make it less susceptible to any sort of living matters or allergies, I started by straining, boiling and then bleaching the sample. Afterwards I washed it and placed it in a bowl with red pigment and hot water. Once it was completed I dried it in the heater. At that point was finally ready to be carded. The end-result was very positive, it was softer, stronger and easier to manipulate and retain form. This process gives the material a real potential as an alternative to furniture filling, or house isolation fibres. It possesses similar properties to many fabrics and is something available everywhere.

The Materials Driven Design approach gave me a different perspective not only on materiality and physicality, but also on design research. This project did not require to sit in front of the computer and investigate a topic and its contextual frame. It did not require to go outside, make observations or interview people. It relied on my most basic senses and emotions, exploring the physicality of product. The whole process felt natural as each result was treated as a discovery. It was not pleasant at times to play with dust, especially at the beginning of the project or at its raw state, but it is something that is part of everyoneâ&#x20AC;&#x2122;s life and an extension of us and our belongings. After all, it is formed by our hair, our skin cells or the fabrics of our clothes. The ways this material revealed itself through its density once boiled, or when applied colour was a positive surprise. A big difference in this project when compared to others, is how as a designer I usually tend to defend my findings or products. However this one is about investigation, which means I have to remain neutral to the facts and findings whether they work in favour of the material or not. When compared to other materials, dust did not proved to be better or worse at any point. It was as strong as cotton and floated as much as wool. Nevertheless it changed my perception of dust itself, which despite its virtues or constraints, proved to be a fascinating material. With more time I would have liked to try and card dust with appropriate machinery and maybe create a real fabric out of it. This project positively changed my relation towards material and showed me how this type of investigation is crucial for a relevant sensorial experience.