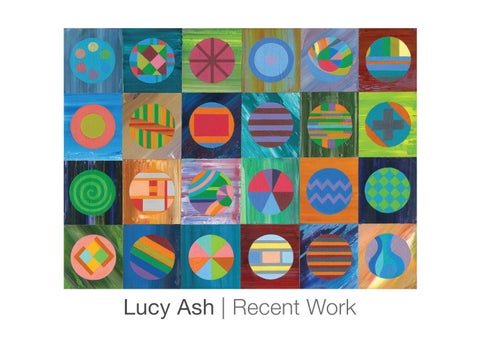 Lucy Ash in her Clapham studio, photograph by Jennifer Baynham

Lucy Ash is a British abstract painter who uses texture and colour to convey meaning. She blends ideas of time, mathematics and rhythm to represent emotional responses to love, death and injustice. Lucy’s practice is to develop series of paintings rather than one off works, enabling an in-depth exploration around specific themes. Her paintings have been the subject of numerous solo exhibitions in the UK, in New York and Amsterdam. Her work Iris 02 has recently been acquired by Southampton City Art Gallery for their permanent collection. Lucy’s work is highly sought after by private collectors and she has undertaken several commissions. An active supporter of LGBTQ Rights, Lucy exhibited the series ‘Wrong Place, Wrong Time’, in 2011, designed to raise awareness of hate-crimes, following the brutal homophobic attack on Ian Baynham.   Lucy was born to a mathematician/inventor father Michael Edward Ash and Canadian mother Dulcie (née Orme). She was a student at Central Saint Martins followed by Camberwell College of Art where she studied sculpture and gained her BA. With a background in film animation, Lucy’s paintings draw directly on the storyboard narrative of film. In addition to exchanging computer-generated images for the visceral physicality of paint, Lucy found time to research and write an acclaimed cookbook ‘A Taste of Astrology’ (Knopf 1988, Sainsbury’s 1993) which was serialised by Gourmet Magazine USA.

The Symmetry of Carnage 02 continues in series the body of work Lucy Ash has created to highlight LGBT issues. In 2011 she exhibited the series ‘Wrong Place, Wrong Time’ to raise awareness of hate-crimes, following the brutal homophobic attack on Ian Baynham, the brother of one of her closest friends. Other series and paintings including ‘Iris 02’ have further focused on this issue. The Symmetry of Carnage 02 was conceived in response to the centenary of WW1 and looks at the necessary invisibility of gay men who served in that war. Homosexuality was illegal and was not tolerated - it was regarded as deviant and immoral. The division of the painting into 11 x 11 rectangles signifies the moment of the end of the war; the 11th hour on the 11th day of the 11th month of 1918. Each of the 121 sections is built from thick earth/mud coloured oil paint tinged with red to mark the tragic spilled blood. Within each section a cross represents a gay soldier who has had to blend in, in life. Now in giving his life for his country he disappears into the earth.

Alexa Forbes commissioned this large and complex work September 2018. The painting was a gift to her husband Jeremy Edwards and is a statement piece for their main living room. Alexa wanted the artwork to reflect their longstanding and loving relationship through the lens of Morocco a place they both love and where they have shared wondrous times. We discussed in depth what they liked about my work. We looked at form and colour and considered what design elements I might bring in to translate into paint this deep bond that love brings when two people share multiple experiences over time. The painting took nearly five months to complete and during that time they were very patient and didnâ&#x20AC;&#x2122;t visit the studio at all, they trusted me to get on with it. The layered complexity of the artwork suggests their many connections and reference strong foundations through the multiple â&#x20AC;&#x2DC;Moroccan styleâ&#x20AC;&#x2122; architectural structures and colours. Geometric shapes juxtapose the soft and lyrical. Circles repeat in different forms to reference eternity. Closed doors remind us that this is often where love is played out. They suggest the subconscious as well as what is hidden below the surface that outsiders to the relationship never see. These motifs give the canvas great depth and unfold across a landscape, filmically, dreamlike, frame-by-frame. .

Iris 02 takes inspiration from the track ‘Blue Calm’ which was written by jazz musician Trish Clowes specifically with the multifaceted Iris in mind. The painting considers the dimensions and symbolism of Iris, the Greek rainbow Goddess of the sky and the sea, and messenger of the Gods. The artwork echoes this division of sea and air within its structure - the underlying base grid of the painting gives a sense of the soft and lyrical with its thick textured oil paint and varied shades of blue that contrast with the harder edged circles. The circles play with the eye and create a contrasting dynamic; they also reinforce the association of Iris with the physical eye and with a rainbow. They hint at the retinal imagery inherent in the music. The circles are specifically restricted to six colours to symbolise the rainbow flag. This painting intuitively responds to the music to express the hope and vitality Iris is seen to represent. Iris 02 is from a series of work, created for and exhibited in Ash’s one-woman show ‘Echoes’ at Turner Sims, Southampton in early 2018. It features a cycle of works created as a response to the melodies, lyrics and themes of jazz artist Trish Clowes’ current album ‘My Iris’. All the paintings echo and complement the sound-world offered by Clowes and her ensemble, whose performance in a city renowned for its jazz, was scheduled to coincide with this exhibition. As a gay artist and activist it was vital to Ash to connect the rainbow of Iris to the rainbow pride flag. Both are multifaceted and represent diversity, hope, and social action. Consequently, the spots are limited to six colours; this gives the artwork impact and a greater sense of depth and passion. It also sits comfortably with the city of Southampton, which embraces and champions its LGBT community.

Rainbow references the rainbow of Iris and suggests the rainbow pride flag. Both are multifaceted and represent diversity, hope, and social action.

Calendar 2018 continues Ashâ&#x20AC;&#x2122;s Calendar series, which she started in 1978. Calendar 2018 is a daily account of that year in paint. It tracks a year in the life of the artist, who is equally concerned with the minutiae and ordinariness of the everyday. This narrative painting is constructed of 372 segments (365 plus 7 extra that include a signature), which form a tapestry of blues and grays built from layers of oil paint and wax crayon. The restricted palate enhances the subtle surface texture that shimmers as it catches the light. This combination subtly communicates a muted story of highs and lows; through the artistâ&#x20AC;&#x2122;s own visual language. Within this limited use of colour there is still dark and light, contrast and depth. Ultimately, this is a very personal work about inevitable change, both in the small and the large; the self and the world.

Homeland 02 evokes both the intransigent landscape as well as migratory flows. It is about ‘forced migration’ and references the track ‘Muted Lines’ on ‘My Iris’, which was written by Cevanne Horrocks-Hopayian and commissioned by Trish Clowes. In ‘Muted Lines’, the melody repeats, because history repeats. In Homeland 02 we see a reductive pattern that reveals the gradual change and loss. The void that is left in cultures, in language and in relationships, because over time so much is forgotten. The culture survives and evolves and new meaning replaces the old.

Fragments explores the theme of forced migration. The artwork relates to memory and the preservation of cultural rituals evident among displaced people who are forced to flee home in seach of a safer, better future. Migrants must keep moving to survive and in doing do so friendships and connections that are formed are also lost. It is an ever changing pattern of enormous risks in which time is of essence.

Lucy Ash in front of one of her Calendar paintings, photograph by Charlotte Bromley Davenport