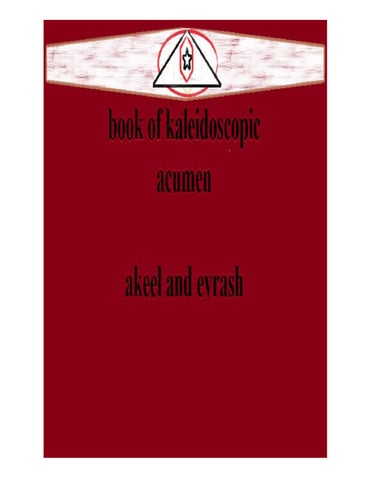 Greetings From The NRG: The NRG would like to take a moment to explain the nature of the association to those unfamiliar with our goals and motivations. We would also like to illustrate that we are not responsible for the misuse of any information we provide. What does NRG stand for? NightMarium Restoration Guild. What is the goal of the NRG? The goal of the NRG is to provide collected data to further expand on the topics covered in the estranged NightMarium texts. -Last written by S-Admin

Concerning The Article: The following text, Book Of Kaleidoscopic Acumen, has been translated by the staff at the NRG into English from the original text written in Secrum Script as accurately as possible. We were asked not to provide further commentary specifically concerning the article. However, we have been allowed to provide a set of commonly known definitions after the translation for those unfamiliar with the Sub-Dex.( Per request the text has been separated from all NRG text with the accustomed dividers). -Copper, Translator

/\/\/|sound after some time we had finally expressed to each other in written symbols as i finished the last symbol akeel snatched the book from me but his face said something was wrong he tossed the book to the table in anger akeel could not read the last page tried to explain but each attempt fell short akeels anger grew as he paced before me then he was crackling with violet energy and i remembered what had happened how he had rose into the sky what he had seen i knew now that akeel was deeply troubled with a grin he approached me a strand of energy shooting past my head he was going to kill me but i had to weapon no sword to stop him i backed up as he grew closer with the grin and evil eyes i continued to cast the symbols in explanation nothing would connect with him i was going to die akeel approached with outstretched hands full of violet violence a vibration came from within my chest something was moving within me my eyes watered and my lips trembled a fiery wind shot up from my insides i feared the energy would tear me open then something was pushing at the back of my throat and mouth and something escaped a single word akeel with the quaking sound akeel vanished from sight and i never seen him or spoke again. -eyrash

A great many years ago two Sera’Taons invented an alphabet known as the Secrum Script, which akin to the English alphabet has twenty-six characters in it. Even more ironic is that Secrum Script is easily translated into English due to the similar arrangement of the characters. Originally Secrum Script lacked any form of punctuation, capitalization or sentence structure. (The lines used after the names in the Book Of Kaleidoscopic Acumen are considered merely markings).

The first appearance of Secrum Script was in the text of Book Of Kaleidoscopic Acumen, which was written by two related Sera’Taons, whose first names only were recorded, Akeel & Erysham.

Secrum numbers follow a basic line pattern. /|=1 while /\|= 2, /\/|=3 and so on. Secrum numbers have evolved into numbers more akin to English representations, if not more artful, since the writing of the sacred Sera’Taon text.

Sera’Taon’s are recorded as tall blue toned humanoid pseudo-reptilian beings that lack the ability to speak, although very rarely can one find a different skin color among them. Sera’Taons most resemble a gecko. Like most amphibian creatures, the Sera’Taons cannot withstand arid climates, or go without water for more than twenty hours, even though they are not technically amphibians.

The race is most well known for their innate talent for invention and pharmaceuticals, both natural and synthesized. In fact, a large percentage of Sera’Taon are regular substance users themselves, ironically enough. On average this doesn’t seem to hinder them in the slightest, but on the contrary makes them more in tune.

Completely separate from the entirety of the realms is another dimension known as the ‘Sub-Dex’. Unlike the structure of most realms, the ‘SubDex’ consists of layers piled atop one another, each of varying thickness, so that technically all of them are connected as one so that there is no true distance between any of the layers. This remains true even if some are physically separate. -All Content Courtesy Of NRG

On the Script I created this piece with a very specific group of ideas in mind, alternate dimensions, metafictional beings, an informative presentation with creative logic. I wanted something that seemed authentic enough to be passed off as a possibility in real life, yet enjoyable enough to be fun for the reader. The actual composition of the the book of kaleidoscopic acumen was written on a deeper levels of interest, god, life, experience, dreams, choices, and the primal instinct of man. It can be hard to escape the confines of reality and I wanted a way to look at the simple things in a unique way. I wanted for the information to be as place in a fairy tell to the reader, so grandeur that perhaps behind a door somewhere lies the portal to this mystical realm. Above all other reasons I wrote this piece to help extend perception. Through new viewpoints, reasoning, and understanding the world as a whole, down to the individual, can become more of what we want it to. â&#x20AC;&#x201C;Rand Burgess Rand on the web: http://anendlessplane.weebly.com/index.html 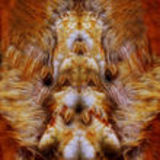