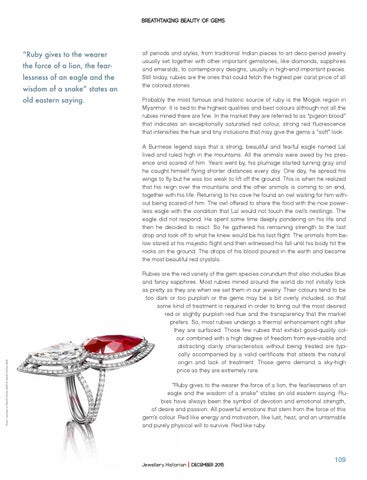 “Ruby gives to the wearer the force of a lion, the fearlessness of an eagle and the wisdom of a snake” states an old eastern saying.

all periods and styles, from traditional Indian pieces to art deco period jewelry usually set together with other important gemstones, like diamonds, sapphires and emeralds, to contemporary designs, usually in high-end important pieces. Still today, rubies are the ones that could fetch the highest per carat price of all the colored stones. Probably the most famous and historic source of ruby is the Mogok region in Myanmar. It is tied to the highest qualities and best colours although not all the rubies mined there are fine. In the market they are referred to as “pigeon blood” that indicates an exceptionally saturated red colour, strong red fluorescence that intensifies the hue and tiny inclusions that may give the gems a “soft” look.

A Burmese legend says that a strong, beautiful and fearful eagle named Lal lived and ruled high in the mountains. All the animals were awed by his presence and scared of him. Years went by, his plumage started turning gray and he caught himself flying shorter distances every day. One day, he spread his wings to fly but he was too weak to lift off the ground. This is when he realized that his reign over the mountains and the other animals is coming to an end, together with his life. Returning to his cave he found an owl waiting for him without being scared of him. The owl offered to share the food with the now powerless eagle with the condition that Lal would not touch the owl’s nestlings. The eagle did not respond. He spent some time deeply pondering on his life and then he decided to react. So he gathered his remaining strength to the last drop and took off to what he knew would be his last flight. The animals from below stared at his majestic flight and then witnessed his fall until his body hit the rocks on the ground. The drops of his blood poured in the earth and became the most beautiful red crystals.. Rubies are the red variety of the gem species corundum that also includes blue and fancy sapphires. Most rubies mined around the world do not initially look as pretty as they are when we set them in our jewelry. Their colours tend to be too dark or too purplish or the gems may be a bit overly included, so that some kind of treatment is required in order to bring out the most desired red or slightly purplish red hue and the transparency that the market prefers. So, most rubies undergo a thermal enhancement right after they are surfaced. Those few rubies that exhibit good-quality colour combined with a high degree of freedom from eye-visible and distracting clarity characteristics without being treated are typically accompanied by a valid certificate that attests the natural origin and lack of treatment. Those gems demand a sky-high price as they are extremely rare. “Ruby gives to the wearer the force of a lion, the fearlessness of an eagle and the wisdom of a snake” states an old eastern saying. Rubies have always been the symbol of devotion and emotional strength, of desire and passion; All powerful emotions that stem from the force of this gem’s colour. Red like energy and motivation, like lust, heat, and an untamable and purely physical will to survive. Red like ruby. 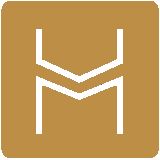