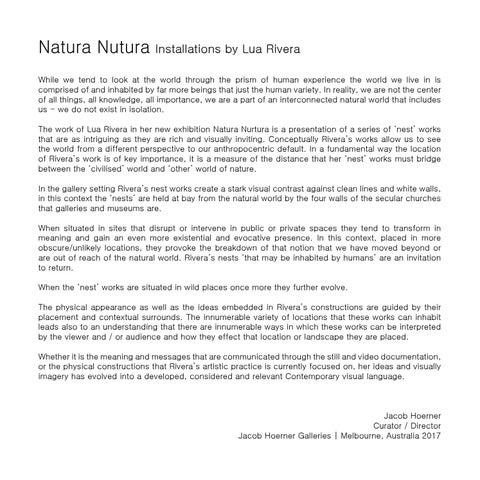 Natura Nutura Installations by Lua Rivera While we tend to look at the world through the prism of human experience the world we live in is comprised of and inhabited by far more beings that just the human variety. In reality, we are not the center of all things, all knowledge, all importance, we are a part of an interconnected natural world that includes us - we do not exist in isolation. The work of Lua Rivera in her new exhibition Natura Nurtura is a presentation of a series of ‘nest’ works that are as intriguing as they are rich and visually inviting. Conceptually Rivera’s works allow us to see the world from a different perspective to our anthropocentric default. In a fundamental way the location of Rivera’s work is of key importance, it is a measure of the distance that her ‘nest’ works must bridge between the ‘civilised’ world and ‘other’ world of nature. In the gallery setting Rivera’s nest works create a stark visual contrast against clean lines and white walls, in this context the ‘nests’ are held at bay from the natural world by the four walls of the secular churches that galleries and museums are. When situated in sites that disrupt or intervene in public or private spaces they tend to transform in meaning and gain an even more existential and evocative presence. In this context, placed in more obscure/unlikely locations, they provoke the breakdown of that notion that we have moved beyond or are out of reach of the natural world. Rivera’s nests ‘that may be inhabited by humans’ are an invitation to return. When the ‘nest’ works are situated in wild places once more they further evolve. The physical appearance as well as the ideas embedded in Rivera’s constructions are guided by their placement and contextual surrounds. The innumerable variety of locations that these works can inhabit leads also to an understanding that there are innumerable ways in which these works can be interpreted by the viewer and / or audience and how they effect that location or landscape they are placed. Whether it is the meaning and messages that are communicated through the still and video documentation, or the physical constructions that Rivera’s artistic practice is currently focused on, her ideas and visually imagery has evolved into a developed, considered and relevant Contemporary visual language.