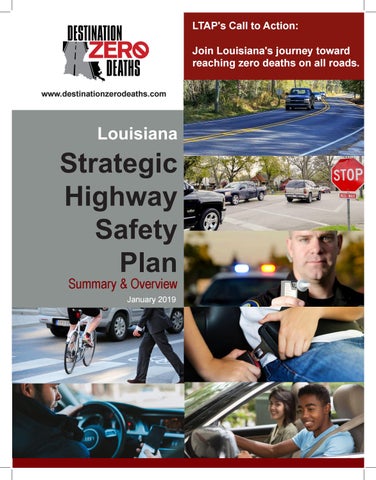 SHSP Regional Safety Coalitions ......................................... 18 This informational material was developed by Louisiana Local Technical Assistance Program (LTAP) to help inform local public agencies, parishes and cities about the Louisiana&#39;s Strategic Highway Safety Plan (SHSP) and the overall vision of reaching Destination Zero Deaths on all public roads. All local agencies are encouraged to participate in this life-saving initiative. Join our journey toward reaching zero deaths! This document and the information contained herein is prepared solely for the purpose of identifying, evaluating and planning safety improvements on public roads which may be implemented utilizing federal aid highway funds; and is therefore exempt from discovery or admission into evidence pursuant to 23 U.S.C. 409.

Louisiana Strategic Highway Safety Plan Destination Zero Deaths (DZD) is more than just a tag line for Louisiana’s Strategic Highway Safety Plan (SHSP). It is our overall vision that drives roadway safety programs and activities aimed at eliminating deaths and serious injuries on Louisiana&#39;s roads. Louisiana has nearly 17,000 miles of state highways and 44,000 of local roads that are used by over 2.9 million licensed drivers. The SHSP was first adopted in 2006. It is a collaborative, data-driven and strategic planning document that is updated every five years. The vision is Destination Zero Deaths. The measurable goal is to reduce fatalities by 50% in 2030. Is this goal realistic? Yes, it is! It takes a 5E Approach to reach our zero goal. This 5E includes:

We encourage parishes and municipalities to develop and implement Local Road Safety Plans that will prioritize efforts to get us to zero deaths. Please browse through this SHSP Summary &amp; Overview document. The succeeding pages provide information about Louisiana’s top traffic safety issues (emphasis areas) as well as the different strategies being implemented through a collaborative and data-driven process. Save a life. Join the journey!

What are the leading causes of vehicle crashes? The 2017 data indicate that roadway departures, intersection crashes, impaired driving, lack of seat belt use, distracted driving, and crashes involving young drivers are the top causes of Louisiana’s motor vehicle crashes. Issues related to bicycle and pedestrian safety are also a concern in some areas of the state. What can you do to help Louisiana reduce the numbers? Join the Destination Zero Deaths initiative. Adopt a zero goal in your parish or city, and implement a Local Road Safety Plan. Get involved with one of the nine regional safety coalitions. Please visit www.destinationzerodeaths.com. See back cover page for contact information.

In Louisiana, over 20% of the fatalities occurred on parish and city roads. This is not surprising as there are more roadway miles on locally owned roads compared to state-owned roads. In 2017 alone, 24% of the fatal crashes and 45% of the injury crashes occurred on local roads. Of the 172 fatal crashes on local roads, 70% resulted from roadway departures, 32% were on intersections, and 40% were due to drunk driving. Louisiana addresses these numbers through a proactive and data-driven approach of developing and implementing Local Road Safety Plans. The SHSP Infrastructure &amp; Operations Emphasis Area team works hand in hand with LTAP to engage the parishes and municipalities in making targeted investments for safety improvements on locally owned roads.

4 Developed by Louisiana LTAP for informational and planning purposes only

Latest statistics shows that about 61% of all traffic fatalities in Louisiana resulted from roadway departures, 27% of which occurred on local roads. Louisiana defines a roadway departure crash as a single vehicle crash which departed the road and did not occur at an intersection, or a multiple vehicle crash where one vehicle crossed the median. The SHSP uses a data-driven safety analysis that combines predictive and systemic approaches to implement proven safety countermeasures on high-crash locations. The LTAP Center is working with parishes and municipalities in developing Local Road Safety Plans to help prioritize safety projects that address roadway departure issues on local roads. Slow down on curves. Drive safely.

Intersection safety is a national, state and local priority. Latest statistics shows that about 20% of fatalities in Louisiana resulted from intersection crashes. From 2013 to 2017, there were 745 fatalities and 2,587 serious injuries, almost 30% happened on locally owned roads. The SHSP uses a data-driven safety analysis that combines predictive and systemic approaches to identify and prioritize the deployment of proven effective countermeasures on high-crash intersections, both signalized and unsignalized. Obey the signs. Drive safely.

Bicycle and pedestrian fatalities in Louisiana have increased over the years. In 2017 alone, there were 117 pedestrians and 23 bicyclists killed. The 23 bicyclists killed showed an increase by 4.5% from 2016. The 117 pedestrians killed accounted for 15% of all traffic fatalities that year. Despite not being identified as an &quot;emphasis area&quot;, bicycle and pedestrian safety is being strategically addressed under the Infrastructure &amp; Operations Emphasis Area. Education and engineering solutions are being implemented to improve the safety of these non-motorized users, particularly in areas where people walk and bike to public places. Watch out for pedestrians and bicyclists.

Over the last decade, 40% of the total traffic fatalities in Louisiana involved alcohol and drugs. This is despite legislation and enforcement efforts that make it illegal to drive while intoxicated or drink if under 21 years old. The SHSP combines high visibility enforcement with education and media efforts to address this issue. The No Refusal Policy is implemented to heighten public safety awareness that DWI is a crime, not just simply a traffic offense. Drive sober or get pulled over.

Did you know Louisiana has a primary seat belt law and an all-passenger (rear and front) law? The primary law allows a police officer to stop and ticket a driver if they observe a safety belt violation. Despite achieving an all-time high in seat belt usage rate of 87%, thereâ&amp;#x20AC;&amp;#x2122;s more work to do to achieve 100%. Louisiana formed the LA Passenger Safety Task Force (LPSTF) that works with law enforcement agencies to highlight the importance of adult and child occupant protection. A major factor in children under age 6 being killed in crashes is that child safety seats are not used or improperly used. Buckle up. It&#39;s the law!

14 Developed by Louisiana LTAP for informational and planning purposes only

Like most states, Louisianaâ&amp;#x20AC;&amp;#x2122;s young drivers are overrepresented in fatal crashes. In 2017 alone, young drivers (15 to 24 years old) accounted for 27% of all fatalities and 29% of all serious injuries. The SHSP combines high visibility enforcement with education and media efforts to address this issue, including strategies to standardize the Drivers Education Program and improve the Graduated Drivers Licensing (GDL) process. Learn the 6 Rules for the Road: no cell phones while driving, no speeding, no drowsy driving, no talking with passengers, no alcohol, and always buckle up.

While collection of distracted driving data remains a challenge, Louisiana takes this issue seriously. In 2017, distracted driving represented 22% of all fatalities and 34% of severe injuries in Louisiana. A distracted or inattentive driver is one who is actively engaged in any activity that diverts his/her attention away from the task of driving. Distraction goes beyond just using the phone behind the wheel. It could be manual, visual, or cognitive and be inside or outside the vehicle. Examples of distraction are texting, eating, talking to passengers, inputting GPS information, and even daydreaming. Eyes on road, hands on wheel. Pay attention.

JOIN OUR JOURNEY TO ZERO. SIGN UP WITH YOUR AREA COALITION.

To accelerate the SHSP&#39;s implementation at the local level, Louisiana established nine Regional Transportation Safety Coalitions through an agreement between DOTD and the designated Regional Planning Commission (RPC) or the Metropolitan Planning Organization (MPO). The DOTD has District Offices that work closely with the MPOs and State Police Troops. Each coalition is led by a full-time coordinator who serves as liaison between the state and local partners from all 4Eâ&amp;#x20AC;&amp;#x2122;s of Safety: Engineering, Education, Enforcement and Emergency Medical Services.

This informational material was developed by Louisiana Local Technical Assistance Program (LTAP) to help inform local public agencies, parishes and cities about the Louisiana's Strategic Highway Safety Plan (SHSP) and the overall vision of reaching Destination Zero Deaths on all public roads. All local agencies are encouraged to participate in this life-saving initiative. Join our journey toward reaching zero deaths!