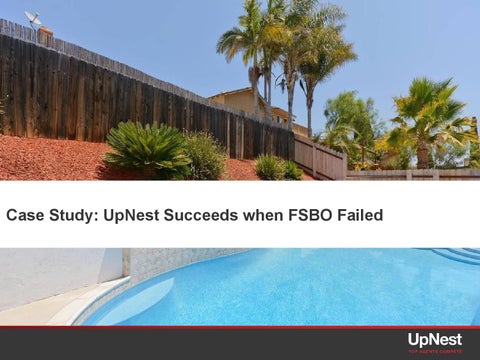 Seller Zarek Could Not Sell His Home via FSBO Seller Zarek had a very attractive home. He priced it at market price through For Sale By Owner, but he wasn’t able to attract any offers. »  He tried to sell his San Diego home via FSBO for $480K in spring of 2014 »  There was interest in the home, but zero offers after a few months »  Various agents told Zarek that they were not showing his property to their buyers because it was listed as FSBO

Zarek Sought Out UpNest as an Alternative to FSBO Zarek decided that FSBO wasn’t going to work, so he came to UpNest to help him find a top local agent who could offer a commission rate of less than 6 percent—a service we provide to sellers at no cost to them. »  He wanted the agent to sell the property for more than $480K so he could net the same profit as if he had sold the house himself »  Five UpNest partner agents competed for Zarek’s business »  Zarek interviewed two agents, and signed with Eric Edelman of R.B. Haley Fine Homes because of his great marketing plans, commission rate, and knowledge of the area Eric, Listing Agent

Zarek’s Home Sold for 10K Over the FSBO Listing Price Eric listed Zarek’s home at $490,000 on June 17 and provided great online and marketing outreach »  The home received a lot of interest—and went into contract five days later! »  The home sold for $490,000 on July 24—$10,000 above Zarek’s FSBO listing price »  The $10,000 difference paid for Eric’s services. Zarek is another happy seller on UpNest.com The Home

UpNest Agent Successfully Takes Over For Sale By Owner Listing: When a FSBO home is not selling, UpNest will help connect sellers with a reliable agent at an affordable price. 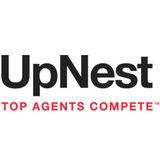