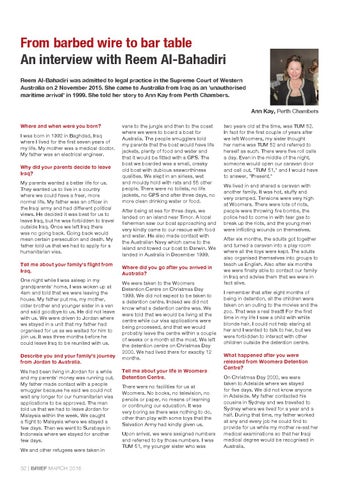 From barbed wire to bar table An interview with Reem Al-Bahadiri Reem Al-Bahadiri was admitted to legal practice in the Supreme Court of Western Australia on 2 November 2015. She came to Australia from Iraq as an 'unauthorised maritime arrival' in 1999. She told her story to Ann Kay from Perth Chambers. Ann Kay, Perth Chambers Where and when were you born? I was born in 1992 in Baghdad, Iraq where I lived for the first seven years of my life. My mother was a medical doctor. My father was an electrical engineer. Why did your parents decide to leave Iraq? My parents wanted a better life for us. They wanted us to live in a country where we could have a freer, more normal life. My father was an officer in the Iraqi army and had different political views. He decided it was best for us to leave Iraq, but he was forbidden to travel outside Iraq. Once we left Iraq there was no going back. Going back would mean certain persecution and death. My father told us that we had to apply for a humanitarian visa. Tell me about your family's flight from Iraq. One night while I was asleep in my grandparents' home, I was woken up at 4am and told that we were leaving the house. My father put me, my mother, older brother and younger sister in a van and said goodbye to us. He did not leave with us. We were driven to Jordan where we stayed in a unit that my father had organised for us as we waited for him to join us. It was three months before he could leave Iraq to be reunited with us. Describe you and your family's journey from Jordan to Australia. We had been living in Jordan for a while and my parents' money was running out. My father made contact with a people smuggler because he said we could not wait any longer for our humanitarian visa applications to be approved. The man told us that we had to leave Jordan for Malaysia within the week. We caught a flight to Malaysia where we stayed a few days. Then we went to Surabaya in Indonesia where we stayed for another few days. We and other refugees were taken in 32 | BRIEF MARCH 2016

vans to the jungle and then to the coast where we were to board a boat for Australia. The people smugglers told my parents that the boat would have life jackets, plenty of food and water and that it would be fitted with a GPS. The boat we boarded was a small, creaky old boat with dubious seaworthiness qualities. We slept in an airless, wet and mouldy hold with rats and 55 other people. There were no toilets, no life jackets, no GPS and after three days, no more clean drinking water or food. After being at sea for three days, we landed on an island near Timor. A local fisherman saw our boat approaching and very kindly came to our rescue with food and water. He also made contact with the Australian Navy which came to the island and towed our boat to Darwin. We landed in Australia in December 1999. Where did you go after you arrived in Australia? We were taken to the Woomera Detention Centre on Christmas Day 1999. We did not expect to be taken to a detention centre. Indeed we did not know what a detention centre was. We were told that we would be living at the centre while our visa applications were being processed, and that we would probably leave the centre within a couple of weeks or a month at the most. We left the detention centre on Christmas Day 2000. We had lived there for exactly 12 months. Tell me about your life in Woomera Detention Centre. There were no facilities for us at Woomera. No books, no television, no pencils or paper, no means of learning or continuing our education. It was very boring as there was nothing to do, other than play with some toys that the Salvation Army had kindly given us. Upon arrival, we were assigned numbers and referred to by those numbers. I was TUM 51, my younger sister who was

two years old at the time, was TUM 52. In fact for the first couple of years after we left Woomera, my sister thought her name was TUM 52 and referred to herself as such. There were five roll calls a day. Even in the middle of the night, someone would open our caravan door and call out, "TUM 51," and I would have to answer, "Present." We lived in and shared a caravan with another family. It was hot, stuffy and very cramped. Tensions were very high at Woomera. There were lots of riots, people were throwing fire bombs, the police had to come in with tear gas to break up the riots, and the young men were inflicting wounds on themselves. After six months, the adults got together and turned a caravan into a play room where all the toys were kept. The adults also organised themselves into groups to teach us English. Also after six months we were finally able to contact our family in Iraq and advise them that we were in fact alive. I remember that after eight months of being in detention, all the children were taken on an outing to the movies and the zoo. That was a real treat!! For the first time in my life I saw a child with white blonde hair. I could not help staring at her and I wanted to talk to her, but we were forbidden to interact with other children outside the detention centre. What happened after you were released from Woomera Detention Centre? On Christmas Day 2000, we were taken to Adelaide where we stayed for five days. We did not know anyone in Adelaide. My father contacted his cousins in Sydney and we travelled to Sydney where we lived for a year and a half. During that time, my father worked at any and every job he could find to provide for us while my mother re-sat her medical examinations so that her Iraqi medical degree would be recognised in Australia. 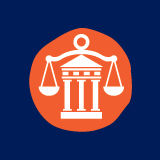 The Law Society of Western Australia