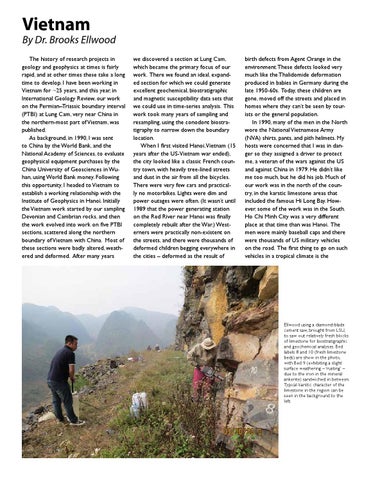 By Dr. Brooks Ellwood The history of research projects in geology and geophysics at times is fairly rapid, and at other times these take a long time to develop. I have been working in Vietnam for ~25 years, and this year, in International Geology Review, our work on the Permian–Triassic boundary interval (PTBI) at Lung Cam, very near China in the northern-most part of Vietnam, was published. As background, in 1990, I was sent to China by the World Bank, and the National Academy of Sciences, to evaluate geophysical equipment purchases by the China University of Geosciences in Wuhan, using World Bank money. Following this opportunity, I headed to Vietnam to establish a working relationship with the Institute of Geophysics in Hanoi. Initially the Vietnam work started by our sampling Devonian and Cambrian rocks, and then the work evolved into work on five PTBI sections, scattered along the northern boundary of Vietnam with China. Most of these sections were badly altered, weathered and deformed. After many years

we discovered a section at Lung Cam, which became the primary focus of our work. There we found an ideal, expanded section for which we could generate excellent geochemical, biostratigraphic and magnetic susceptibility data sets that we could use in time-series analysis. This work took many years of sampling and resampling, using the conodont biostratigraphy to narrow down the boundary location. When I first visited Hanoi,Vietnam (15 years after the US-Vietnam war ended), the city looked like a classic French country town, with heavily tree-lined streets and dust in the air from all the bicycles. There were very few cars and practically no motorbikes. Lights were dim and power outages were often. (It wasn’t until 1989 that the power generating station on the Red River near Hanoi was finally completely rebuilt after the War.) Westerners were practically non-existent on the streets, and there were thousands of deformed children begging everywhere in the cities – deformed as the result of

birth defects from Agent Orange in the environment. These defects looked very much like the Thalidomide deformation produced in babies in Germany during the late 1950-60s. Today, these children are gone, moved off the streets and placed in homes where they can’t be seen by tourists or the general population. In 1990, many of the men in the North wore the National Vietnamese Army (NVA) shirts, pants, and pith helmets. My hosts were concerned that I was in danger so they assigned a driver to protect me, a veteran of the wars against the US and against China in 1979. He didn’t like me too much, but he did his job. Much of our work was in the north of the country, in the karstic limestone areas that included the famous Hi Long Bay. However, some of the work was in the South. Ho Chi Minh City was a very different place at that time than was Hanoi. The men wore mainly baseball caps and there were thousands of US military vehicles on the road. The first thing to go on such vehicles in a tropical climate is the

Ellwood using a diamond-blade cement saw, brought from LSU, to saw out relatively fresh blocks of limestone for biostratigraphic and geochemical analyses. Bed labels 8 and 10 (fresh limestone beds) are show in the photo, with Bed 9 (exhibiting a slight surface weathering – ‘rusting’ – due to the iron in the mineral ankerite) sandwiched in between. Typical karstic character of the limestone in the region can be seen in the background to the left.

The history of research projects in geology and geophysics at times is fairly rapid, and at other times take a long time to develop. Brooks Ellwood has been working in Vietnam for close to 25 years, and this year, in International Geology Review, his work on the Permian-Triassic boundary interval (PTBI) at Lung Cam was published.