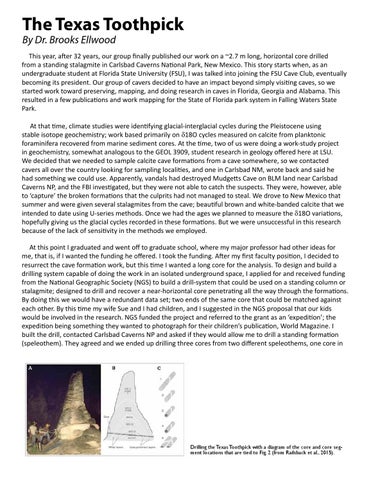 This year, after 32 years, our group finally published our work on a ~2.7 m long, horizontal core drilled from a standing stalagmite in Carlsbad Caverns National Park, New Mexico. This story starts when, as an undergraduate student at Florida State University (FSU), I was talked into joining the FSU Cave Club, eventually becoming its president. Our group of cavers decided to have an impact beyond simply visiting caves, so we started work toward preserving, mapping, and doing research in caves in Florida, Georgia and Alabama. This resulted in a few publications and work mapping for the State of Florida park system in Falling Waters State Park. At that time, climate studies were identifying glacial-interglacial cycles during the Pleistocene using stable isotope geochemistry; work based primarily on d18O cycles measured on calcite from planktonic foraminifera recovered from marine sediment cores. At the time, two of us were doing a work-study project in geochemistry, somewhat analogous to the GEOL 3909, student research in geology offered here at LSU. We decided that we needed to sample calcite cave formations from a cave somewhere, so we contacted cavers all over the country looking for sampling localities, and one in Carlsbad NM, wrote back and said he had something we could use. Apparently, vandals had destroyed Mudgetts Cave on BLM land near Carlsbad Caverns NP, and the FBI investigated, but they were not able to catch the suspects. They were, however, able to ‘capture’ the broken formations that the culprits had not managed to steal. We drove to New Mexico that summer and were given several stalagmites from the cave; beautiful brown and white-banded calcite that we intended to date using U-series methods. Once we had the ages we planned to measure the d18O variations, hopefully giving us the glacial cycles recorded in these formations. But we were unsuccessful in this research because of the lack of sensitivity in the methods we employed. At this point I graduated and went off to graduate school, where my major professor had other ideas for me, that is, if I wanted the funding he offered. I took the funding. After my first faculty position, I decided to resurrect the cave formation work, but this time I wanted a long core for the analysis. To design and build a drilling system capable of doing the work in an isolated underground space, I applied for and received funding from the National Geographic Society (NGS) to build a drill-system that could be used on a standing column or stalagmite; designed to drill and recover a near-horizontal core penetrating all the way through the formations. By doing this we would have a redundant data set; two ends of the same core that could be matched against each other. By this time my wife Sue and I had children, and I suggested in the NGS proposal that our kids would be involved in the research. NGS funded the project and referred to the grant as an ‘expedition’; the expedition being something they wanted to photograph for their children’s publication, World Magazine. I built the drill, contacted Carlsbad Caverns NP and asked if they would allow me to drill a standing formation (speleothem). They agreed and we ended up drilling three cores from two different speleothems, one core in

Drilling the Texas Toothpick with a diagram of the core and core segment locations that are tied to Fig. 2 (from Railsback et al., 2015).

In 1983 Brooks B. Ellwood, Robey Clark Distinguished Professor in Geology, and his research group drilled two cores from a large stalagmite that he named The Texas Toothpick. 32 years later they were finally able to publish their results.