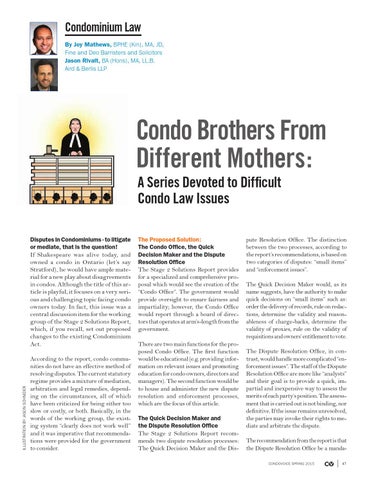 Disputes in Condominiums - to litigate or mediate, that is the question! If Shakespeare was alive today, and owned a condo in Ontario (let’s say Stratford), he would have ample material for a new play about disagreements in condos. Although the title of this article is playful, it focuses on a very serious and challenging topic facing condo owners today. In fact, this issue was a central discussion item for the working group of the Stage 2 Solutions Report, which, if you recall, set out proposed changes to the existing Condominium Act. According to the report, condo communities do not have an effective method of resolving disputes. The current statutory regime provides a mixture of mediation, arbitration and legal remedies, depending on the circumstances, all of which have been criticized for being either too slow or costly, or both. Basically, in the words of the working group, the existing system “clearly does not work well” and it was imperative that recommendations were provided for the government to consider.

pute Resolution Office. The distinction between the two processes, according to the report’s recommendations, is based on two categories of disputes: “small items” and “enforcement issues”. The Quick Decision Maker would, as its name suggests, have the authority to make quick decisions on “small items” such as: order the delivery of records, rule on redactions, determine the validity and reasonableness of charge-backs, determine the validity of proxies, rule on the validity of requisitions and owners’ entitlement to vote. The Dispute Resolution Office, in contrast, would handle more complicated “enforcement issues”. The staff of the Dispute Resolution Office are more like “analysts” and their goal is to provide a quick, impartial and inexpensive way to assess the merits of each party’s position. The assessment that is carried out is not binding, nor definitive. If the issue remains unresolved, the parties may invoke their rights to mediate and arbitrate the dispute. The recommendation from the report is that the Dispute Resolution Office be a mandaCONDOVOICE SPRING 2015