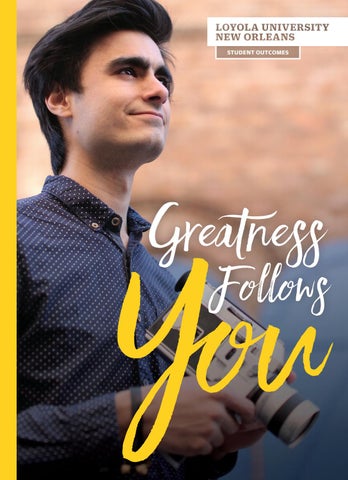 MEANINGFUL Impact Our students are passionate, entrepreneurial, and driven.

Whether they know exactly what they want to do or they’re still figuring it out, there’s a fire within them urging them toward innovation. And that’s why they choose Loyola—because here, you build that fire into something real. Something meaningful. And something yours.

Our students are entrepreneurs, scientists, artists, inventors, musicians—creators. The greatness they encounter every day, the ambition they recognize in each other, pushes them toward a future with real impact. We think that’s you. That you’re among those who have it, those who want to do something innovative, create something meaningful—and inspire others toward their own greatness.

And here, that’s what you’ll do. Read on to find out how.

thrive Sophomore NICK RAMEY is already an award-winning filmmaker with impressive statistics: He’s made 10 films that have been shown at more than 30 festivals across nine countries — and he’s just getting started.

thrive Sophomore NICK RAMEY is already an award-winning filmmaker with impressive statistics: He’s made 10 films that have been shown at more than 30 festivals across nine countries — and he’s just getting started.

in a city built for an innovator like you. New Orleans is a living, breathing idea lab full of character, history, culture, and creativity. The energy here feeds innovation. And the good news, too, is that it’s basically just another part of our campus. Our Center for Entrepreneurship and Community Development partners with organizations and programs like the Idea Village and Venture for Nola to send our students to internships at local startups and businesses. Our local entrepreneurs know who we are because we’re out there with them, changing the game.

in a community built to support its geniuses.

in classes designed to give you real experience.

at jobs before you even graduate.

As a Loyola student, you have access to a dynamic network of more than 50,000 alumni. Many serve as mentors, offer career advice, or connect you with other professionals in your area of interest, even outside New Orleans. The Career Development Center and our Alumni Network can help you land internships and jobs in New York; San Francisco; Washington, D.C.; Chicago; Los Angeles; London; Belgium—or your hometown.

You won’t just talk about it— you’ll do it. Our students create original research; they record masterpieces in our studios; they go into the wetlands to study wildlife; they work at NASA’s Stennis Space Center to commercialize new technology; and they consistently blow our minds—and the minds of potential employers.

Loyola students come from and

We put our students face-to-face with hundreds of employers, and students often have job offers before they graduate. Our Career Development Center partners with a wide variety of employers to connect students to internships, jobs, and graduate schools, and our professors are well-known in their fields and help students network and make professional contacts. And with more than 1,500 internship opportunities offered, by the time you’re looking for a job, you’ll have already had one.

Get results; get the job. When you leave us, you won’t be starting a career. You’ll be continuing one. Some recent Loyola student internships include: • Children’s Hospital • Consulate General of France • Ernst &amp; Young • HBO Studios • Louisiana Philharmonic Orchestra

BEST CITY IN THE UNITED STATES FOR CREATIVE PROFESSIONALS

4 FULBRIGHT SCHOLARS IN THE PAST YEAR

I thoroughly enjoyed my time in both the music

Through their small class sizes, they were able to encourage me to try out all facets of the industry, introducing internship opportunities along the way. I don’t think I would have ended up in the career I am in now without my education from Loyola.

WHERE Tech entrepreneur and founder of Electric Girls, a STEM-education startup that teaches elementary-age girls that they can be as skilled as anyone in electronics, audio, computer programming, and design H OW S H E G O T T H E R E Majored in music industry studies; noticed she was the only female engineer who worked in the recording studio; developed her own curriculum that allowed her to mentor freshmen in the studio; encouraged young women with an interest in STEM to stick with it; got inspired to continue the work

I asked Loyola if I could develop a curriculum for a

program that I would actually work on with students and measure the outcomes. I applied for the Magis grant.

I wrote grant proposals to the Women’s Resource Center and Music Industry Department. In total, I got $1,300. And Electric Girls was born.

WHERE Founder of the Krewe of Freret; on the board of Emerging Philanthropists of New Orleans; and director of marketing for Leviton, the largest electrical equipment manufacturer in the U.S. H OW H E G O T T H E R E Started a photography business shooting musicians/concerts; worked for publications and brands like Maxim magazine and Sports Illustrated; sold photographs to both CBS and HBO for use as set decoration on the walls of their TV productions; decided to invest seriously in the smart home industry

With such a small, creative atmosphere, you’re really encouraged to push yourself, try new things, and collaborate with others on many levels. So not only do I leverage the skillsets imposed but also the relationships afforded to me as a student and alumnus. So many Loyola grads are willing to help give you a leg up or a helping hand; all you have to do is ask!

SCHOOL OF MASS COMMUNICATION ESPN ANCHOR Smith joined ESPN full-time in 2004 as a senior writer for ESPN.com and an NFL Insider for “SportsCenter” and “NFL Live.” He is currently an ESPN sportscaster who co-hosts his show, “SC6,” with Jemele Hill; they’ve launched a new conversational format for ESPN “SportsCenter,” discussing sports topics, news, culture, and social issues. Michael Smith, ’01

SCHOOL OF MASS COMMUNICATION ABC ANCHOR Llamas is currently ABC’s chief national correspondent and was anchor of “World News Tonight” weekend edition. He has covered the trial of the Boston Marathon bombers; the death of Tamir Rice; the Ebola outbreak in the United States; and, most recently, the Republican candidates for the 2016 election, including Donald Trump’s successful presidential campaign.

SCHOOL OF MASS COMMUNICATION CNBC ANCHOR Mui has recently joined CNBC as a Washington, D.C., correspondent. Before that, she served as the White House economic policy writer at The Washington Post, where she covered the Federal Reserve, the economy, subprime lending, consumer finance, retail, and education. She has also covered international stories such as the Greek financial crisis and Great Britain’s exit from the European Union, as well as natural disasters such as the BP oil disaster and Hurricane Katrina. Ylan Mui, ’02

College of Music and Fine Arts, Music Industry Studies College of Business/College of Music and Fine Arts, Marketing/Music Industry Studies WHERE Popular musician G-Eazy, made Forbes’ “30 under 30,” won big at the VMAs H OW H E G O T T H E R E Started rapping as a freshman in high school; recorded songs and uploaded them to Myspace; sold CDs out of his backpack; came to Loyola and majored in music industry studies; played shows; kept making music; chose not to sign with record labels during college; received management by fellow alumnus Matt Bauerschmidt ’10; released an album, These Things Happen, in 2014 that made it to No. 3 on the Billboard 200; released another album, When It’s Dark Out, in 2015 that had a single, “Me Myself and I,” that peaked at No. 7 on the Billboard Hot 100

This is where I found my voice, myself, my

sound, everything . . . it was really coming together in those years.

COLLEGE OF ARTS AND SCIENCES, BIOLOGY

WHERE Conducting summer research at Yale Cardiovascular Research Center as a recipient of the American Heart Association Founders Affiliate Undergraduate Student Summer Research Fellowship H OW S H E G O T T H E R E Volunteered for March of Dimes starting at age 7; became a part of March of Dimes’ National Youth Council as a freshman at Loyola; almost attended school to be a physician’s assistant; decided on Loyola instead; discovered the passion to be a surgeon; pursued research in molecular signaling and blood-brain barriers in preterm babies

At Loyola, I decided I wanted to be a doctor because I knew I was smart enough. Loyola was the only normal undergraduate program I applied to. All of the other schools were five-year master’s programs— fast tracks to a physician assistant degree. It turns out that Loyola was a great decision because here I decided I no longer wanted to be a PA.

WHERE A national Venture for America fellow, where he will learn how to build businesses while making an impact on the world and the community H OW H E G O T T H E R E Majored in economics; excelled at Loyola as a student leader and through mentorships around campus; made his mark as an intern at The Rock Hill Department of Housing and Neighborhood Services, Northwestern Mutual, the New Orleans Mayor’s Office, and currently Goldman Sachs’ 10,000 Small Businesses program

I came to Loyola University New Orleans with the

intentions of being ‘my own man.’ I quickly realized that this was not the right attitude. I learned that we are called a ‘wolf pack’ for a reason. It’s important to build relationships, and I depend upon my peers and community to motivate me along the way. With this holistic support, I

was able to grow as a leader, make great decisions, and learn more about myself and what I hope to be in the future.

COLLEGE OF ARTS AND SCIENCES, BIOLOGY

WHERE 2017 Gates Cambridge Scholar starting Ph.D. research in zoology at the University of Cambridge focusing on the functional role of spiders in Southeast Asian oil palm plantations and how plantation management techniques affect overall spider biodiversity; will be a member of the Insect Ecology Group in the Department of Zoology H OW H E G O T T H E R E Received the Ignatian scholarship; joined the Honors program and gained hands-on experience as a member of the Aimée Thomas Lab; became interested in the effects of certain species on the diversity and species richness of spider communities; learned the field and laboratory skills needed to work toward his goal of being a tropical community ecologist; won a 2016 Goldwater Scholarship; made national waves with his research

My Jesuit education instilled in me the need to link my research to environmental and social justice. I know that this, in particular, contributed to me successfully obtaining a Gates Cambridge Scholarship.

Make your deposit at loyno.edu/deposit

Our students are passionate, entrepreneurial, and driven. Whether they know exactly what they want to do or they’re still figuring it out, there’s a fire within them urging them toward innovation. And that’s why they choose Loyola—because here, you build that fire into something real. Something meaningful. And something yours. Our students are entrepreneurs, scientists, artists, inventors, musicians—creators. The greatness they encounter every day, the ambition they recognize in each other, pushes them toward a future with real impact. We think that’s you. That you’re among those who have it, those who want to do something innovative, create something meaningful—and inspire others toward their own greatness. And here, that’s what you’ll do. Read on to find out how. 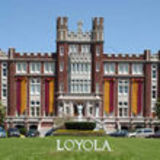