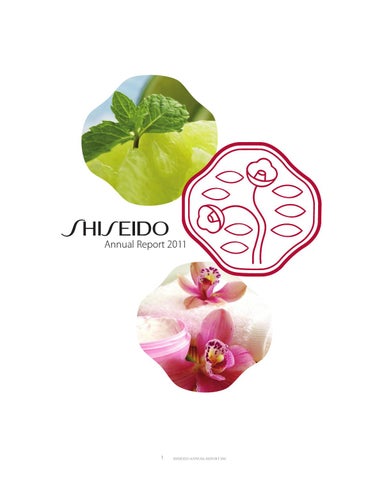 Shiseido commenced operations as the first Westernstyle pharmacy of Japan in Tokyoâ&#x20AC;&#x2122;s Ginza district in 1872, a time when Chinese herbal remedies were the mainstream in Japan. The name Shiseido derives from a Chinese expression meaningâ&#x20AC;&#x153;praise the virtues of the great Earth, which nurtures new life and brings forth new values.â&#x20AC;?In line with this expression, Shiseido remains committed to its founding spirit of serving customers and contributing to society by bringing together all things on Earth to create new value.

Notes: 1. All dollar amounts herein refer to U.S. currency. Yen amounts have been translated, solely for the convenience of the reader, at the rate of ¥83.15 to US$1 prevailing on March 31, 2011.

This is about the fullness of personal experiences, not about what money can buy. We believe that our customers can feel the true richness through our uncompromising excellence and attention to details both visible and invisible, in all of our products. We will provide our best to our customers.

MESSAGE FROM THE PRESIDENT & CEO

Shiseido aims to become a global player representing Asia with its origins in Japan. Under the theme of getting into a growth trajectory, the new Three-Year Plan will guide Shiseido in achieving a turnaround in Japan and accelerating globalization to evolve into and remain an outstanding company in the future.

I am Hisayuki Suekawa. I became President & CEO of Shiseido in April 2011. I received the baton of reform from my predecessor, Shinzo Maeda, and will carry it forward as the head of the Company. I intend to lead the advance of Shiseidoâ&#x20AC;&#x2122;s innovation. The year ended M arch 2011 was the final year of the previous Three-Year Plan.Overseas sales increased solidly, with s trong growth in China and the rest of Asia complemented by the sales of Bare Escentuals, Inc., which we acquired in the year ended March 2010. In the domestic market, some sectors such as the self-selection category showed signs of recovery. However, the mid-priced market, a crucial market segment for Shiseido, was challenging and remains an area we must work on. Operating income decreased partly because of lower sales in Japan and nonrecurring costs associated with the acquisition of Bare Escentuals. Our progress overseas during the past three years was impressive. In addition to strengthening cultivation of the global brand , we worked aggressively to enhance competitiveness through initiatives such as accelerating growth in China by concentrating on channel-specific marketing. As a result, we achieved solid sales growth at a compound annual growth rate of 13 percent on a local currency basis. We generated substantial sales growth in all the regions we serve, with compound annual growth rates of 26 percent in the Americas, 11 percent in Asia/Oceania, and 5 percent in Europe. For the year ended March 2011, the overseas sales ratio increased to 42.9 percent, leading me to conclude that we have cultivated strong businesses with a solid foundation. During the previous Three-Year Plan, we implemented all reforms as planned. Some of them succeeded, but we also recognize that our reforms are only halfway complete. My mission is to drive Shiseidoâ&#x20AC;&#x2122;s evolution by taking charge of and accelerating the reforms we have been implementing.

Shiseido must take on challenges to evolve into and remain an

outstanding company in the future.

or higher on a local currency basis and operating profitability of 10 percent within three years.

Our targets are high and achieving them will be a challenge. We will increase investments

1982: sixyears of experience as a sales manager in Nara, Japan, began handling strategy formulation and other projects at the head office.

We aim to maximize returns to shareholders through direct means and by generating medium- and long-term share price gains. To this end, our fundamental policy is to make strategic investments that drive earnings growth while raising capital efficiency, which will lead to medium- and long-term increases in dividends and share price. Our target for returns over the medium-term is a consolidated payout ratio of 40 percent. Based on this target, we will prioritize payment of stable dividends while implementing share buybacks in a flexible manner. For the year ending March 2012, we plan to keep annual dividends at 짜50 per share due to the expectation that earnings will increase under the new Three-Year Plan and our continuing emphasis on stable dividends.

We are counting on the continued support of shareholders and investors as we evolve to meet your expectations.

OMOTENASHI In the spirit of Omotenashi, we welcome you to Shiseido, with our hands, minds and hearts open. We believe that caring, sensitivity and empathy define the beauty in communicating and building relationships. We carry this idea with us whenever we interact with our customers.

During the fiscal year ended March 31, 2011, the cosmetics market continued to grow overseas, with ongoing recovery in Europe and North America and continued strong market expansion in China and newly industrialized economies. In Japan, the cosmetics market brightened briefly during summer 2010, but overall consumer sentiment was slow to improve and the market continued to contract. In addition, Japan suffered from the Great East Japan Earthquake in March 2011, which was an unprecedented natural disaster. Shiseido devoted all of its capabilities to these corporate activities during the fiscal year ended March 31, 2011. As a result, overseas sales increased 21.2 percent compared with the previous fiscal year to ¥287,835 million ($3,461,636 thousand), with recovery of the potential for growth in the markets of Europe and North America and continued strong growth in Asian markets including China. Shiseido also completed the acquisition of U.S. cosmetics company Bare Escentuals, Inc. in March 2010, which added to net sales. In the Japanese market, however, consumer sentiment was slow to improve and a changing market structure that is becoming polarized between highand low-priced products led to continued contraction in the mid-priced cosmetics market, sales in Japan decreased 5.8 percent to ¥382,866 million ($4,604,522 thousand). Consequently, net sales including domestic and overseas sales increased 4.1 percent to ¥670,701 million .

Although Shiseido worked to reduce expenses and operate efficiently, nonrecurring expenses associated with the acquisition of Bare Escentuals and lower marginal income because of the

impact of a change in estimation of product samples and promotional items within the scope of assets, write-down of investments in securities, and loss on disaster related to the Great East

In the first year of the Three-Year Plan that concluded on March 31, 2011, Shiseido had to change its targets for operating profitability, return on equity (ROE; net income divided by average total net assets) and the overseas sales ratio because of the impact of the global financial crisis touched off by the collapse of Lehman Brothers in autumn 2008 and the subsequent changes in

Improve quality of activities across the board

Globalization Phase II Get into a growth trajectory

Establish a presence in Asia

Operating profitability for the fiscal year ended March 31, 2011, the final year of the Three-Year Plan, was 6.6 percent, and ROE was 3.9 percent. The overseas sales ratio was 42.9 percent as a result of strong growth in Shiseido’s China business and the acquisition of Bare Escentuals.

percentage points to 68.2 percent Analysis of the major components of SG&A expenses is included in the

concentrating brands/lines for investment, which reduced the overall ratio of marketing costs to net sales. 9.8

Other Expenses The ratio of other expenses to net sales increased 0.4 percentage points to 21.7 percent despite efforts to reduce costs in response to lower net sales.

Message from the President & CEO

Management Targets of the New Three-Year Plan 1. Compound annual growth in net sales of 6% or higher 2. Operating profitability of 10% within three years procurement, calculated as interest less interest expense, totaled ¥1,497 million ($18,004 thousand), compared with net interest expense of ¥738 million ($8,876 thousand) for the previous fiscal year. Losses including the impact of a change in estimation of product samples and promotional items within the scope of assets were also booked in Other Income.

Income Taxes, Including Deferred Taxes Income taxes, including deferred taxes, increased 40.4 percent compared with the previous fiscal year to ¥13,328 million ($160,289 thousand) as a result of the tax effect of the elimination of unrealized intercompany profit on inventories. The effective tax rate was 46.4 percent, compared with 20.3 percent in the previous fiscal year.

Review by Reportable Segment Sales in the Domestic Cosmetics Business segment decreased 6.6 percent year on year to ¥358,408 million despite solid results in the healthcare business.

At Shiseido, research extends far beyond the chemistry of cosmetics and the biology of human skin. It is the first cosmetics comeany get these results all over the world. It incorporate holistic human perception as well as our physical, mental, emotional and spiritual responses to evetything around us.

Total investments and other assets

The accompanying notes are an integral part of the consolidated financial statements.

Loss on adjustment for changes of accounting standard for

Loss on adjustment for changes of estimate for samples and

Increase (decrease) in provision for liabilities and charges

Loss on adjustment for changes of accounting standard for lease transactions

Amounts in U.S. dollars are included solely for the convenience of the reader. The rate of ¥83.15 = US$1 prevailing on March 31, 2011 has been used in translating the consolidated financial statements expressed in Japanese yen into U.S. dollars. Such translations should not be construed as representations that the Japanese yen amounts could be readily converted, realized or settled in U.S. dollars at this rate.

(2) Inventories Previously, inventories held by the Company for normal sales in the ordinary course of business were valued at cost, determined by the average method, while inventories held by domestic consolidated subsidiaries were valued at cost, determined primarily by the last purchase price method. Effective from the fiscal year ended March 31, 2009, however, the Company applied “Accounting Standard for Measurement of Inventories” (Accounting Standards Board of Japan (“ASBJ”), Statement No. 9, issued July 5, 2006) and unified accounting policies between the Company and its consolidated subsidiaries. Accordingly, such inventories are generally valued at cost, determined by the average method. (Carrying (Additional Information) Accounting Estimation for Samples and Promotional Items. As a result of this change in estimate recorded in the current fiscal year, income before income taxes and net income decreased ¥6,751 million and ¥4,805 million.

(3) Property, Plant and Equipment The U.S. dollar am ounts in the accompanying property, plant and equipment with respect to the year ended March 31, 2011 are presented solely for convenience. Buildings are depreciated using the straight-line method. Other tangible fixed assets are, in principle, depreciated using the declining-balance method at the Company and its domestic consolidated subsidiaries and the straight-line method at overseas consolidated subsidiaries. Major fixed assets in Japan are depreciated over specific useful lives based on durability, level of deterioration, and special characteristics, which represent an approximate 20-30% reduction from useful lives utilized for tax purposes.

(5) Lease Assets Finance lease assets that are not deemed to transfer ownership of the leased property to the lessee are depreciated using the straight-line method over the period of the lease, with zero residual value.