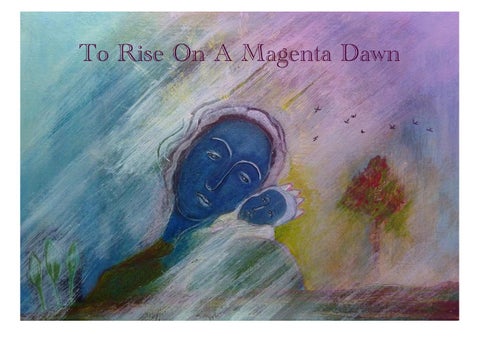 on a morning shot through with incandescent beauty, in a world riddled with fierce tribulations.

I appear to be in a room of velvet and vertigo, stitched together with gut and gold thread.

Bright silks are embroidering sentences on the bedspread in an indecipherable code.

taps letters onto scraps of paper,

torn at the edges and pitted with cigarette ash. I canâ&#x20AC;&#x2122;t seem to move my head from the pillow so I lie in bed feeling lost for now.

Simply drawing breath triggers a deep tremor in the heart. I remember a girl at school, Felicity Marsh,

with two long plaits pinned to the top of her head. One Saturday afternoon, at a friend’s ninth birthday party, we were playing a game of ‘Pin the Tail on the Donkey’. Felicity was on and she was blindfolded. We laughed when she froze in mid-step,

holding out her right arm helplessly in front of her. Someone undid the blindfold

and Felicity no longer recognised anything or anyone.

She didn’t know where she was or what she was doing.

At first everyone thought she was joking but it turned out that, in the time it took her to tiptoe from the tea table to the wall, she had completely lost her bearings.

With her right arm outstretched

she held the tip of a cardboard tail, together with a drawing pin,

between her index finger and thumb. There, in the fuzzy darkness,

her identity had disappeared. The mind is a terrible trickster.

Miss Ruby lived up the road from us, in one of the prefabs. She was convinced that the KGB was after her

and she wouldnâ&#x20AC;&#x2122;t open the door to anyone, not for anything. Well, except to the egg man, oddly enough,

who came once a fortnight on a Thursday morning.

He said it was like stepping into a Cabinet of Curiosities.

He sat on the settee and looked at a copy of ‘Knowledge’,

a weekly encyclopedia, open at a page about Marian Shrines. The egg man said that he was mesmerised by the face on a statue of the Virgin Mary.

He surprised himself by asking Mother Mary to protect him. He’d never done anything like that before

and he wouldn’t say what had so disturbed him. He just said he’d “entered uncharted waters”. As he left the curious house, he said thank you to Mary

and asked her to look after Miss Ruby as well.

It got me wondering and I went along to the library to find out more about the shrines.

There were all sorts of comings and goings on our street in those days.

As well as the egg man, there was a milkman, rent man, insurance man, knife grinder, chimney sweep, the Indian man with swathes of cloth, a hardware trolley, pop van, fish and chip van - the list goes on. Now and then a tramp stood by the gate

and my mom made a quick sandwich and told me to take it to him. Once she made him a cup of tea in a tin mug

and my brother said he wanted to be a tramp when he grew up. Sometimes the rag and bone man clattered up in his horse and cart. He seemed to have arrived from a black and white world but handed out brightly coloured balloons on sticks.

Weâ&#x20AC;&#x2122;d run into our houses and fetch stuff that was being thrown away, chasing after the cart to claim our balloons for the afternoon.

As a rule, the bread man came quite early,

peppering his conversation with snippets of Welsh and Italian.

He was known affectionately as both ‘Dai the Bread’ and ‘Luigi the Loaf’. He used to tease us children that Dai and Luigi were identical twins. One day I found him laughing with my mom in the back yard. She was struggling to pronounce something,

while my dad looked on suspiciously from the kitchen window. She came in with a recipe for Welsh Cakes. A few days later I heard her saying to dad:

“Go on, they’ve got nutmeg in. You like nutmeg.” But he wouldn’t try one and so she stuck to making scones after that. Mind you, he went off those

when he found her pouring curdled milk into the mixture.

“Well, that’s why I make them,” she protested, “to save having to throw it away!”

Dad stopped eating the browned skin from the top of the rice pudding because he’d suddenly gone off nutmeg.

Nobody else liked the skin and mom stopped making it. I was fed up about that.

I used to love her rice pudding with a spoonful of raspberry jam. Dad seemed to become suspicious about anything

other than fruitcake or Victoria sponge at Sunday teatime. The mind’s a tyrant.

Now I sit up in bed watching the tops of trees glowing. The rooks are swaying on the highest branches,

I’m remembering that old library book about Shrines to Mary. I was always taking it out

and I ran up a fine once when I forgot to return it.

The book was sqaure and it had a cover of midnight blue, with Mary draped in powder blue, standing on a crescent moon, surrounded by stars.

I liked learning poems by heart

and a few lines have stayed with me:

“O bread of life which swell’dst up without leaven! O bridge which join’st together earth and heaven! Whose eyes see me through these walls and through glass…”

I used to imagine Mary watching me from the other side of the wall,

behind the pale yellow wallpaper covered in pink roses. I wonder if she’s outside the window now, invisible in the early morning light.

I kept the book hidden under my bed.

I whispered the poems in the bathroom,

with the door locked and the taps running, so that no-one would hear me.

They didn’t hold with that sort of thing in our house. This verse comes back to me now: “There is a lady sweet and kind,

Was never face so pleased my mind; I did but see her passing by, And yet I love her till I die.”

I close my eyes, repeating these few lines silently. I learned lots of other poems as well but I can’t recall any of them.

The mind is a trickster, a tyrant and a thief.

When I peep out again, the walls are transformed.

The old rosy wallpaper from my childhood bedroom is faintly overlaid on the paintwork. Then the sweet, kind ladyâ&#x20AC;&#x2122;s face

comes shining through the roses. I sit very still and dare not move. She looks familiar and piercing. Suddenly, within her features, I see another face,

It is as if a juddering, old newsreel is quietly transmitting

to an impoverished and careworn world.

I feel her hands at my elbows; a peculiar sensation, both cool and fiery.

It is at once reassuring and urgent, letting me know that I need to flap my invisible wings harder if I am ever to take off.

Her face, her gaze, restores me. She smiles upon my name. I listen to her silver voice,

intoning as if from a dream. Her words ripple through the room.

“One morning as I’m passing by across a gold and violet sky, when everything has gone awry and no-one knows the how or why, when all the clouds collide and run to halt the day not yet begun, unravelling the threads you’ve spun, you’ll rise to meet the shining sun.

You’ll need to tread the path you’ve drawn, to mend the cloth that’s always torn, to hold the rose and mind the thorn and learn to die before you’re born to rise on a magenta dawn.” 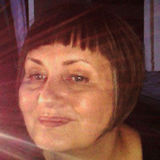