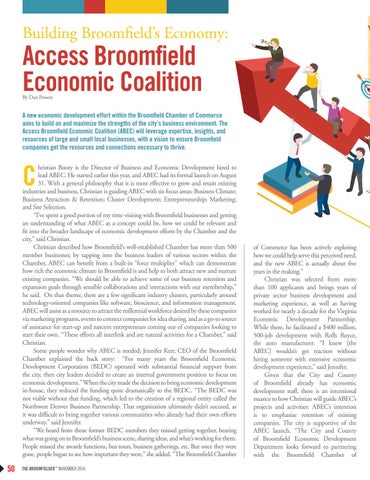 A new economic development effort within the Broomfield Chamber of Commerce aims to build on and maximize the strengths of the city’s business environment. The Access Broomfield Economic Coalition (ABEC) will leverage expertise, insights, and resources of large and small local businesses, with a vision to ensure Broomfield companies get the resources and connections necessary to thrive.

hristian Booty is the Director of Business and Economic Development hired to lead ABEC. He started earlier this year, and ABEC had its formal launch on August 31. With a general philosophy that it is most effective to grow and retain existing industries and business, Christian is guiding ABEC with six focus areas: Business Climate; Business Attraction &amp; Retention; Cluster Development; Entrepreneurship; Marketing; and Site Selection. “I’ve spent a good portion of my time visiting with Broomfield businesses and getting an understanding of what ABEC as a concept could be, how we could be relevant and fit into the broader landscape of economic development efforts by the Chamber and the city,” said Christian. Christian described how Broomfield’s well-established Chamber has more than 500 member businesses; by tapping into the business leaders of various sectors within the Chamber, ABEC can benefit from a built-in “force multiplier” which can demonstrate how rich the economic climate in Broomfield is and help to both attract new and nurture existing companies. “We should be able to achieve some of our business retention and expansion goals through sensible collaborations and interactions with our membership,” he said. On that theme, there are a few significant industry clusters, particularly around technology-oriented companies like software, bioscience, and information management. ABEC will assist as a resource to attract the millennial workforce desired by these companies via marketing programs, events to connect companies for idea sharing, and as a go-to source of assistance for start-up and nascent entrepreneurs coming out of companies looking to start their own. “These efforts all interlink and are natural activities for a Chamber,” said Christian. Some people wonder why ABEC is needed; Jennifer Kerr, CEO of the Broomfield Chamber explained the back story: “For many years the Broomfield Economic Development Corporation (BEDC) operated with substantial financial support from the city, then city leaders decided to create an internal government position to focus on economic development.” When the city made the decision to bring economic development in-house, they reduced the funding quite dramatically to the BEDC. “The BEDC was not viable without that funding, which led to the creation of a regional entity called the Northwest Denver Business Partnership. That organization ultimately didn’t succeed, as it was difficult to bring together various communities who already had their own efforts underway,” said Jennifer. “We heard from those former BEDC members they missed getting together, hearing what was going on in Broomfield’s business scene, sharing ideas, and what’s working for them. People missed the awards functions, bus tours, business gatherings, etc. But once they were gone, people began to see how important they were,” she added. “The Broomfield Chamber

of Commerce has been actively exploring how we could help serve this perceived need, and the new ABEC is actually about five years in the making.” Christian was selected from more than 100 applicants and brings years of private sector business development and marketing experience, as well as having worked for nearly a decade for the Virginia Economic Development Partnership. While there, he facilitated a $400 million, 500-job development with Rolls Royce, the auto manufacturer. “I knew [the ABEC] wouldn’t get traction without hiring someone with extensive economic development experience,” said Jennifer. Given that the City and County of Broomfield already has economic development staff, there is an intentional nuance to how Christian will guide ABEC’s projects and activities: ABEC’s intention is to emphasize retention of existing companies. The city is supportive of the ABEC launch, “The City and County of Broomfield Economic Development Department looks forward to partnering with the Broomfield Chamber of

The 2016 Talk of the Town Winners! It's our 5th annual look at Broomfield’s favorite businesses and restaurants as selected by you, our readers. See if your favorites made the list! 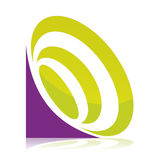