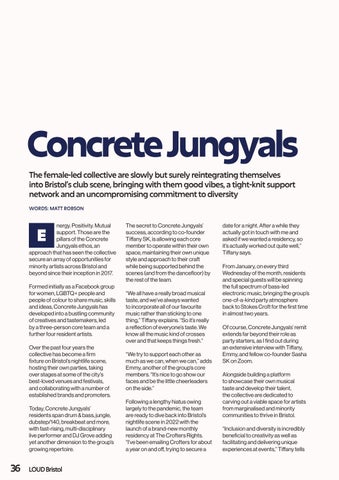 Concrete Jungyals The female-led collective are slowly but surely reintegrating themselves into Bristol’s club scene, bringing with them good vibes, a tight-knit support network and an uncompromising commitment to diversity WORDS: MATT ROBSON

nergy. Positivity. Mutual support. Those are the pillars of the Concrete Jungyals ethos, an approach that has seen the collective secure an array of opportunities for minority artists across Bristol and beyond since their inception in 2017.

Formed initially as a Facebook group for women, LGBTQ+ people and people of colour to share music, skills and ideas, Concrete Jungyals has developed into a bustling community of creatives and tastemakers, led by a three-person core team and a further four resident artists. Over the past four years the collective has become a firm fixture on Bristol’s nightlife scene, hosting their own parties, taking over stages at some of the city’s best-loved venues and festivals, and collaborating with a number of established brands and promoters. Today, Concrete Jungyals’ residents span drum &amp; bass, jungle, dubstep/140, breakbeat and more, with fast-rising, multi-disciplinary live performer and DJ Grove adding yet another dimension to the group’s growing repertoire.

The secret to Concrete Jungyals’ success, according to co-founder Tiffany SK, is allowing each core member to operate within their own space, maintaining their own unique style and approach to their craft while being supported behind the scenes (and from the dancefloor) by the rest of the team. “We all have a really broad musical taste, and we’ve always wanted to incorporate all of our favourite music rather than sticking to one thing,” Tiffany explains. “So it’s really a reflection of everyone’s taste. We know all the music kind of crosses over and that keeps things fresh.” “We try to support each other as much as we can, when we can,” adds Emmy, another of the group’s core members. “It’s nice to go show our faces and be the little cheerleaders on the side.” Following a lengthy hiatus owing largely to the pandemic, the team are ready to dive back into Bristol’s nightlife scene in 2022 with the launch of a brand-new monthly residency at The Crofters Rights. “I’ve been emailing Crofters for about a year on and off, trying to secure a

date for a night. After a while they actually got in touch with me and asked if we wanted a residency, so it’s actually worked out quite well,” Tiffany says. From January, on every third Wednesday of the month, residents and special guests will be spinning the full spectrum of bass-led electronic music, bringing the group’s one-of-a-kind party atmosphere back to Stokes Croft for the first time in almost two years. Of course, Concrete Jungyals’ remit extends far beyond their role as party starters, as I find out during an extensive interview with Tiffany, Emmy, and fellow co-founder Sasha SK on Zoom. Alongside building a platform to showcase their own musical taste and develop their talent, the collective are dedicated to carving out a viable space for artists from marginalised and minority communities to thrive in Bristol. “Inclusion and diversity is incredibly beneficial to creativity as well as facilitating and delivering unique experiences at events,” Tiffany tells 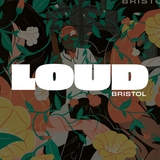