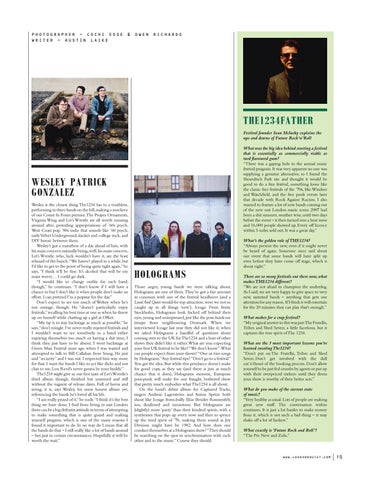 THE1234FATHER Festival founder Sean Mclusky explains the ups and downs of Future Rock’n’Roll What was the big idea behind starting a festival that is essentially as commercially viable as turd flavoured gum? “There was a gaping hole in the annual music festival program. It was very apparent no one was supplying a genuine alternative, so I found the Shoreditch Park site and thought it would be good to do a free festival, something loose like the classic free festivals of the ’70s, like Windsor and Watchfield, and the free punk events later that decade with Rock Against Racism. I also wanted to feature a lot of new bands coming out of the new east London music scene. 2007 had been a shit summer, weather wise, until two days before the event – it then turned into a heat wave and 16,000 people showed up. Every off licence within 5 miles sold out. It was a great day.”

WESLEY PATRICK GONZALEZ Wesley is the closest thing The1234 has to a triathlete, performing in three bands on the bill, making a mockery of our Count In Fours premise.The Proper Ornaments, Virginia Wing and Let’s Wrestle are all worth running around after, providing appropriations of ’60s psych, West Coast pop, ’80s indie that sounds like ’60 psych, early Velvet Underground, slacker and college rock, and DIY heroic between them. Wesley’s got a marathon of a day ahead of him, with his main concern naturally being, well, his main concern, Let’s Wrestle, who, luck wouldn’t have it, are the least reheard of the bunch. “We haven’t played in a while, but I’d like to get to the point of being quite tight again,” he says, “I think it’ll be fine. It’s alcohol that will be my main worry… I could go dark. “I would like to change outfits for each band, though,” he continues. “I don’t know if I will have a chance to but I don’t like it when people don’t make an effort. I can pretend I’m a popstar for the day.” Don’t expect to see too much of Welsey when he’s not onstage, though. He “doesn’t particularly enjoy festivals,” recalling his best time at one as when he threw up on himself while chatting up a girl at Offset. “My tip is to stay backstage as much as possible,” he says,“don’t mingle. I’ve never really enjoyed festivals and I wouldn’t want to see somebody in a band either enjoying themselves too much or having a shit time, I think they just have to be absent. I went backstage at Green Man Festival years ago when I was wasted and attempted to talk to Bill Callahan from Smog. He just said “security” and I was out. I respected him way more for that. I want the bands I like to act like dicks and not chat to me; Lou Reed’s never gonna be your buddy.” The1234 might give us our first taste of Let’s Wrestle’s third album though, finished but unmixed and still without the vaguest of release dates. Full of horns and string, it is, says Wesley, his most honest album yet, referencing the bands he’s loved all his life. “I am really proud of it,” he nods.“I think it’s the best thing we have done. I find from living in east London there can be a big defeatist attitude in terms of attempting to make something that is quite grand and making yourself progress, which is one of the many reasons I found it important to do. In no way do I mean that all the bands do that – I still really like a lot of bands around – but just in certain circumstances. Hopefully it will be worth the wait.”

HOLOGRAMS Those angry, young bands we were talking about, Holograms are one of them. They’ve got a fair amount in common with one of the festival headliners (and a Loud And Quiet would-be top attraction, were we not so caught up in all things ‘new’), Iceage. From frosty Stockholm, Holograms look fucked off behind their eyes, young and unimpressed, just like the post-hardcore troupe from neighbouring Denmark. When we interviewed Iceage last year they did not like it; when we asked Holograms a handful of questions about coming over to the UK for The1234 and a host of other shows they didn’t like it either. What are you expecting your first UK festival to be like? “We don’t know”.What can people expect from your shows? “One or two songs by Holograms.” Any festival tips? “Don’t go to a festival.” You get the idea. But while this petulance doesn’t make for good copy, as they say (and there is just as much chance that it does), Holograms moronic, European post-punk will make for one fraught, bothered show that pretty much embodies what The1234 is all about. On the band’s debut album for Captured Tracks, singers Andreas Lagerström and Anton Spetze both shout like Iceage front-bully Elias Bender Rønnenfelt, too, deadened and monotone. But Holograms are (slightly) more ‘party’ than their kindred spirits, with a synthesiser that pops up every now and then to spruce up the tired spirit of ’76, making them sound as Joy Division might have by 1982. And how does one conduct themselves at a Holograms show? “They should be marching on the spot in synchronisation with each other and to the music.” Course they should.

What’s the golden rule of THE1234? “Always present the new, even if it might never be heard of again. Someone once said about our event that some bands will have split up even before they have come off stage, which is about right.”  There are so many festivals out there now, what makes THE1234 different? “We are not afraid to champion the underdog. As I said, we are very happy to give space to very new, untested bands – anything that gets our attention for any reason. If I think it will entertain for the 20 minutes they can play that’s enough.”   What makes for a crap festival? “My original answer to this was just:The Fratellis, Tribes and Shed Seven; a little facetious, but it captures the true spirit of The 1234.  What are the 3 most important lessons you’ve learned curating The1234? “Don’t put on The Fratellis, Tribes and Shed Seven.  Don’t get involved with the dull cut’n’thrust of the booking process. Don’t allow yourself to be just fed crumbs by agents or put up with their overpriced turkeys until they deem your show is worthy of their better acts.”  What do you make of the current state of music? “Very healthy as usual. Lots of people are making great new stuff. The conversation within continues. It is just a lot harder to make money from it, which is not such a bad thing – it may shake off a lot of fuckers.” What exactly is ‘Future Rock and Roll’? “The Pre New and Zulu.” 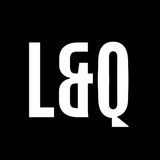 Loud And Quiet 41 – Bat For Lashes

Loud And Quiet 41 – Bat For Lashes