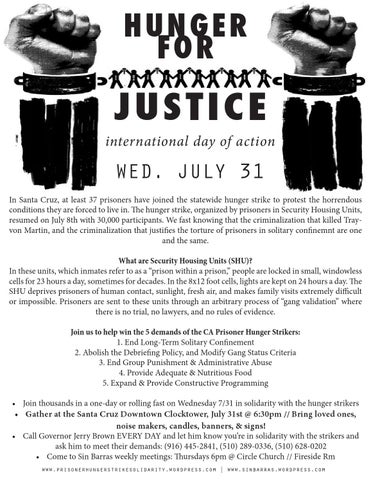 WED. JULY 31 In Santa Cruz, at least 37 prisoners have joined the statewide hunger strike to protest the horrendous conditions they are forced to live in. The hunger strike, organized by prisoners in Security Housing Units, resumed on July 8th with 30,000 participants. We fast knowing that the criminalization that killed Trayvon Martin, and the criminalization that justifies the torture of prisoners in solitary confinemnt are one and the same. What are Security Housing Units (SHU)? In these units, which inmates refer to as a “prison within a prison,” people are locked in small, windowless cells for 23 hours a day, sometimes for decades. In the 8x12 foot cells, lights are kept on 24 hours a day. The SHU deprives prisoners of human contact, sunlight, fresh air, and makes family visits extremely difficult or impossible. Prisoners are sent to these units through an arbitrary process of “gang validation” where there is no trial, no lawyers, and no rules of evidence. Join us to help win the 5 demands of the CA Prisoner Hunger Strikers: 1. End Long-Term Solitary Confinement 2. Abolish the Debriefing Policy, and Modify Gang Status Criteria 3. End Group Punishment & Administrative Abuse 4. Provide Adequate & Nutritious Food 5. Expand & Provide Constructive Programming • Join thousands in a one-day or rolling fast on Wednesday 7/31 in solidarity with the hunger strikers

UPDATES: • On Monday July 22nd, one of the hunger strikers, Billy “Guero” Sell, died while inside Corcoran SHU • Prison officials have retaliated against prisoners on strike by blasting air conditioning into their cells and leaving them in outdoor excercise cages to sunburn • Inmates participating in the strike have had their cells raided, legal papers confiscated, and denied contact with their lawyers

“We are presently out of alternative options for achieving the long overdue reform to this system and, specifically, an end to statesanctioned torture, and now we have to put our lives on the line via indefinite hunger strike to force CDCR to do what’s right.” - Pelican Bay State Prison SHU Short Corridor Collective   California holds nearly 12,000 people in extreme isolation at a cost of over $60 million per year. The cells have no windows, and no access to fresh air or sunlight. The United Nations condemns the use of solitary confinement for more than 15 days as torture, yet many people in California state prisons have been encaged in solitary for 10 to 40 years! In 2011, over 12,000 prisoners and their family and community members participated in statewide hunger strikes organized across racial and geographic lines to protest torturous conditions. California Department of Corrections and Rehabilitation (CDCR) promised meaningful reform. In February 2013, prisoners announced that another hunger strike would begin July 8th because of CDCR’s failure to fulfill that promise. 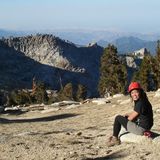