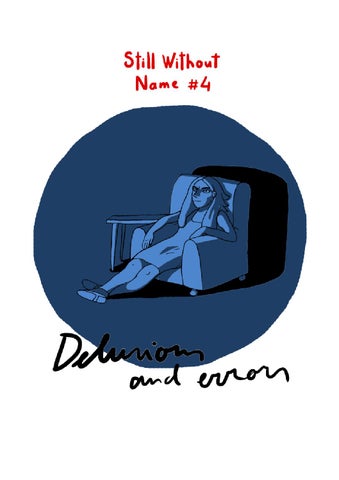 II NN TT RR OO DD UU CC TT II OO NN As you probably understood, this 4th issue of SW\/ON zine is about delusions and errors. Although you can find mistakes and delusions in our other publications, this issue is particularly devoted to delusions and errors. The reason for this is that both the human and the machine are characterized as being fallible. It is programmed in our genes gens. And somehow we convey it not only to our children, but also for anyone and anything that is touched by our hands and our minds. Don't get angry for being fallible. It won't help.\r\r But why there are delusions, you may ask. Itā€™s because we believe that the reality without delusion is just an illusion. Everything breaks and erodes, but still we create a brilliant future with synthetic happiness and love. We live in a world where common sense is often perceived as delirium and error of errors. And that's why this edition is specifically dedicated to this phenomenon. YOUR YOUR KG KG TEAM TEAM

ANA KUN "THIS IS ALL WRONG"

TADAS BUJANAUSKAS "THE ISLE OF BREAD" 1. The flour is poured into the ship called "Flou" 2. The disaster of ship "Flou"! All of the flour pours into the open sea! 3. A yeast dough island forms from the flour and it is slowly rising. 4. After a while a bread tree grows on that island. 5. Even the Lithuanian writer Zemaite liked the bread.

GERDA JORD "PERSONALITY STEPS OUT OF THE COMFORT ZONE"

Boris Pramatarov (1 989) is a Bulgarian visual artist, based in Belgium. He was elected in the top 1 0 “Young talents“ at the Angoulême International Comics Festival 201 3, his comic project “Machines à cubes” was published in Jeunes Talents Angoulême album (Iconograf-Atelier BD).

Chiara Lammens lives and works in Ghent, Belgium. She investigates the boundaries between the classic comicstrip, different ways of storytelling, genretableaux, prehistoric murals and so on. All these influences make for a colourful mash-up of influences and gives lead towards the acting out of little histories. Together, the images make up an exiting mix of strange improbabilities, age-old love stories, disorienting accidents and other rabbles.

Egle Plytnikaite is a freelance illustrator, working and living in Vilnius, Lithuania. After graduating from architecture studies at the Fine Arts Academy in Vilnius (201 4) Egle began to work in the sustainable architecture field. Soon her focus was taken by illustration and so she started her career.

Lithuanian comics artist Gerda Jord works on short and long comics which are constantly published in Lithuanian cultural press and her personal blog gerdajord.blogspot.com. She is often inspired with history, personalities, absurd and beauty. In collaboration with Miglė Anušauskaitė Gerda has published a graphic novel "1 0 litų" in 201 4.

Gianluca Sturmann is an Italian illustrator and designer. He takes his inspiration from nature, music and zen meditation.

Ieva Gvazdaityte (Lithuania) - http://whitecardboard.blogspot.com/ A woman living in a mushroom

Jana Lenova is a graphic designer and illustrator currently working as a freelancer in Vienna (Austria). Jana like cats, good food, patterns, colors and sound of sea. In her projects Jana is mostly looking for borders between design, art and illustration. It is challenge for her to experiment with forms of graphic design and try to find new possibilities of visuality as it is common.

jrs0ul is a programmer and illustrator from Lithuania. He was making a few games over a decade, but suddenly realized that programming is not meant for him, nor could successfully express his ideas, as it can be expressed through comics. So jrs0ul ditched programming and returned to comics drawing!

Juste Urbonaviciute is a freelance photographer/illustrator based in Vilnius, Lithuania.

Juste Venclovaite lives and works in Vilnius. She does different things, mostly related to art in one way or another.

Laura Kenins is a Latvian-Canadian comic artist living in Riga, Latvia and Halifax, Canada. In between making comics she writes about the arts and teaches haunted kindergarteners.

Lina Itagaki graduated from Vilnius Art Academy (graphic art) a year ago and now is trying to become an illustrator. Likes drawing illustrations and comics, creating artist books. Recently she started to enjoy drawing big illustrations on the walls.

Luigi Filippelli is a cartoonist and a short stories lover. He likes autumn, Suikoden and Henri Rousseau. In 201 1 together with Nadia Bordonali he founded a small, independent publishing house: MalEdizioni. On the same year they created “Tra le Nuvole”, a traveling comic festival that bring comics in the provinces libraries. His last book is “1 3 sardine circa”.

Migle Anusauskaite draws comics about literature, science, movies and everyday human life (as she is a human herself). She has a comics column in a paper "Siaures Atenai" and has published a comic book "1 0 litu" together with Gerda Jord. Comic in this zine is an excerpt from upcoming project "K+V+K".

Nerijus Smola, now living and working in Kaunas, is a illustrator and undeground comix fanzine publisher since 1 999. Nerijus has created his first comix during Geology studies in Germany. From that time he has published few fanzines together with other comics artists from Germany, Czech Republic, UK and Lithuania. Nerijus is also one of the members of Lithuanian comics group and small press publisher “Kitokia grafika”.

Nettmann is 1 980 awardee of the gallery at the primary school,1 982 got trophy for the funniest costume at the final ceremony at the summer camp,1 984 studied in the fine arts class of the local youth club, 1 990 became member of the Berlin based comic crew "Renate"* and co-editor of the same name fanzine,1 994 released first cartoonbook, 1 998 got driving licence, 201 3 got a son and started topical project "Familienjuwelen", a comicblog in collaboration with his colleague and friend Anna Bas Backer, 201 4 his 8th and freshest cartoonbook was released at the chartbreaking German publishing house Jaja Verlag.

Zane Zlemesa is from Riga, studying there Graphic Art and doing drawings as illustrations and comics. Zane like books and looking forward to draw forever. 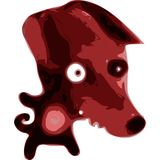