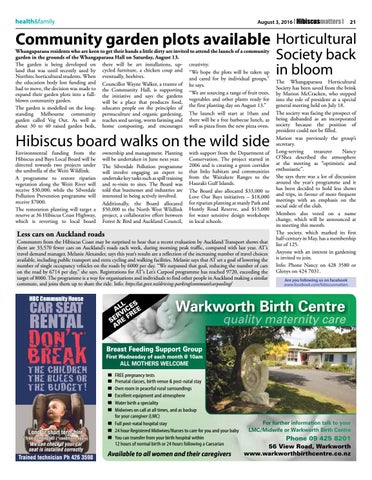 Community garden plots available Horticultural Whangaparaoa residents who are keen to get their hands a little dirty are invited to attend the launch of a community garden in the grounds of the Whangaparaoa Hall on Saturday, August 13. The garden is being developed on there will be art installations, up- creativity. land that was until recently used by cycled furniture, a chicken coup and “We hope the plots will be taken up Northtec horticultural students. When eventually, beehives. and cared for by individual groups,” the education body lost funding and Councillor Wayne Walker, a trustee of he says. had to move, the decision was made to the Community Hall, is supporting expand their garden plots into a full- the initiative and says the gardens “We are sourcing a range of fruit trees, vegetables and other plants ready for blown community garden. will be a place that produces food, The garden is modelled on the long- educates people on the principles of the first planting day on August 13.” standing Melbourne community permaculture and organic gardening, The launch will start at 10am and garden called Veg Out. As well as teaches seed saving, worm farming and there will be a free barbecue lunch, as about 30 to 40 raised garden beds, home composting, and encourages well as pizza from the new pizza oven.

Hibiscus board walks on the wild side Environmental funding from the Hibiscus and Bays Local Board will be directed towards two projects under the umbrella of the Weiti Wildlink. A programme to restore riparian vegetation along the Weiti River will receive $30,000, while the Silverdale Pollution Prevention programme will receive $7000. The restoration planting will target a reserve at 36 Hibiscus Coast Highway, which is reverting to local board

ownership and management. Planting will be undertaken in June next year. The Silverdale Pollution programme will involve engaging an expert to undertake key tasks such as spill training and re-visits to sites. The Board was told that businesses and industries are interested in being actively involved. Additionally, the Board allocated $50,000 to the North West Wildlink project, a collaborative effort between Forest & Bird and Auckland Council,

with support from the Department of Conservation. The project started in 2006 and is creating a green corridor that links habitats and communities from the Waitakere Ranges to the Hauraki Gulf Islands. The Board also allocated $33,000 to Love Our Bays initiatives – $18,000 for riparian planting at manly Park and Huntly Road Reserve, and $15,000 for water sensitive design workshops in local schools.

Commuters from the Hibiscus Coast may be surprised to hear that a recent evaluation by Auckland Transport shows that there are 33,570 fewer cars on Auckland’s roads each week, during morning peak traffic, compared with last year. AT’s travel demand manager, Melanie Alexander, says this year’s results are a reflection of the increasing number of travel choices available, including public transport and extra cycling and walking facilities. Melanie says that AT set a goal of lowering the number of single occupancy vehicles on the roads by 6000 per day. “We surpassed that goal, reducing the number of cars on the road by 6714 per day,” she says. Registrations for AT’s Let’s Carpool programme has reached 9720, exceeding the target of 8000. The programme is a way for organisations and individuals to find other people in Auckland making a similar commute, and joins them up to share the ride. Info: https://at.govt.nz/driving-parking/commute/carpooling/

Society back in bloom

The Whangaparaoa Horticultural Society has been saved from the brink by Marion McCracken, who stepped into the role of president at a special general meeting held on July 18. The society was facing the prospect of being disbanded as an incorporated society because the position of president could not be filled. Marion was previously the group’s secretary. Long-serving treasurer Nancy O’Shea described the atmosphere at the meeting as “optimistic and enthusiastic”. She says there was a lot of discussion around the year’s programme and it has been decided to hold less shows and trips, in favour of more frequent meetings with an emphasis on the social side of the club. Members also voted on a name change, which will be announced at its meeting this month. The society, which marked its first half-century in May, has a membership list of 125. Anyone with an interest in gardening is invited to join. Info: Phone Nancy on 428 3580 or Glenys on 424 7031. Are you following us on facebook www.facebook.com/hibiscusmatters

Breast Feeding Support Group First Wednesday of each month @ 10am

FREE pregnancy tests Prenatal classes, birth venue & post-natal stay Own room in peaceful rural surroundings Excellent equipment and atmosphere Water birth a speciality Midwives on call at all times, and as backup for your caregiver (LMC)  Full post-natal hospital stay  24 hour Registered Midwives/Nurses to care for you and your baby  You can transfer from your birth hospital within 12 hours of normal birth or 24 hours following a Caesarian      

We can check if your car seat is installed correctly

Available to all women and their caregivers 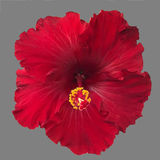