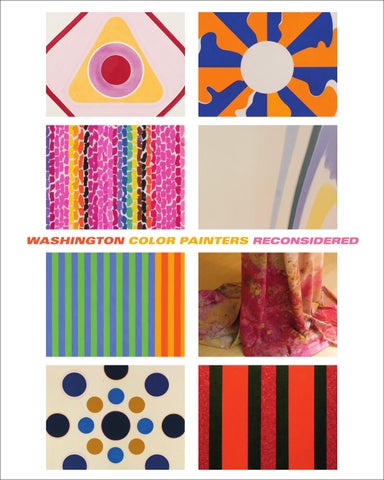 “The Now in the Painting” Helaine Posner &amp; Sue Scott In 1965, Gerald Nordland, then Director of the Washington Gallery of Modern Art, organized the defining exhibition, The Washington Color Painters. Featuring the work of Morris Louis, Kenneth Noland, Gene Davis, Thomas Downing, Howard Mehring, and Paul Reed, it toured nationally. Washington Color Painters Reconsidered marks the 50th anniversary of this pivotal exhibition, reassessing a major movement that has yet to take its deserved place in the history of modern American art. As curators of contemporary art with a shared interest in this movement, we wish to celebrate, and also to reevaluate, the achievements of the six artists featured in the 1965 show, some of whom have been acclaimed by history while others have not. We also want to look at the work of three artists not included in that exhibition—Sam Gilliam, Alma Thomas, and Anne Truitt— who were working at the same time and in the same place, employing similar materials, techniques, and styles, and contributing significantly to its legacy. opposite page from left to right Sam Gilliam, Howard Mehring , Paul Reed, Alma Thomas, Gene Davis, Kenneth Noland, Morris Louis, Thomas Downing

What was happening art historically that led to the emergence of the Washington Color Painters? Beginning in the 1950s, a number of artists living and working in Washington, D.C. began to experiment with techniques and approaches that would lead them away from the heavily impastoed, gestural work associated with second generation Abstract Expressionism to form their individual, yet related styles. Using newly available acrylic paints, thinned and soaked or stained into unprimed canvas, these artists created a new type of abstract painting characterized by openness and visual clarity, asserting the primacy of color, and favoring a relatively anonymous touch. Morris Louis (1912-62) and Kenneth Noland (1924-2010) are the leading figures in this movement. In a now legendary 1953 trip, Louis visited New York with Noland for a weekend during which the artists met with Franz Kline, saw Jackson Pollock’s drip paintings for the first time, conferred with critic Clement Greenberg and, perhaps most important, visited Helen Frankenthaler’s studio, where they saw the painting Mountains and Sea (1952). Noland re-

marked, “She showed us a way to think about and use color.” Louis agreed, observing, “She was a bridge between Pollock and what was possible,” for themselves and for the Washington artists within their sphere.

Louis, the elder artist and guiding force, was a reserved figure. Even as he produced patterns with repeated geometric elements such as stripes, pillars, and bands, his poured veils, floral imagery, and unfurled paintings consistently convey a sense of the organic. It is as if they were created by a natural force. Louis and Noland became Color Field Paintings’ most acclaimed figures thanks, in part, to Greenberg’s critical support. Noland’s more rigorous use of geometry and symmetry, seen in his signature circle and chevron paintings, set the pace for the geometric styles pursued by Thomas Downing, Howard Mehring, and Paul Reed. Gene Davis experimented with edgeto-edge vertically-striped canvases as early as 1958. Additionally, Noland taught Downing and Mehring at Catholic University, organized oneperson exhibitions of the work of Davis and Louis, and served as a catalyst and liaison between Washington and the larger, more active art scene in New York after his move there in 1961. Each Washington Color Field painter explored the movement’s cool, flat style—sometimes called Post Painterly Abstraction—in unique yet related ways. Gene Davis (1920-85) settled on the use of vertical stripes to form dynamic color patterns in 1959 and pursued their myriad possibilities throughout his career. Thomas Downing (1925-1985) was directly influenced by Noland’s circle paintings and derived his own vocabulary of dots and dials from

them.Â The disc paintings of the 1960s by Paul Reed (b.1919) feature a single central circle on a field of color, a motif also developed from Nolandâ&amp;#x20AC;&amp;#x2122;s circles. Howard Mehring (1931-78) ranged from paintings comprising small spots of color that form overall, expanding fields to hard-edged geometric canvases composed of saturated color. We have chosen to broaden the initial Washington School roster to include African-American and women artists. Sam Gilliam (b. 1933), a slightly younger artist generally associated with a second generation of Color Field painters, flung, rolled, and dripped acrylic paint on unprimed canvas. He took color painting to the next level by dramatically suspending the canvases, unstretched, from the ceiling or wall, adding an architectural element. Alma Thomas (1891-1978) is the outlier of the group. Born in the previous century, she worked most of her life as a schoolteacher. After retiring in 1960, she studied art at American University, where she discovered Color Field Painting. Her distinctive mosaic-like marks, often in primary colors, form the building blocks of her abstract paintings. Anne Truitt (1921-2004) is acclaimed for her large vertical, wooden sculptures covered in many coats of meticulously applied paint. Although often considered a Minimalist because of her use of radically simple forms, she can be allied instead with the Color Field artists by her exploration of subtly nuanced color as well as her touch.1

It is no secret that Color Field Painting has been in critical limbo for decades. “Starting in the 1970s, there was a terrific reaction against Color Field painting and abstract art in general, which was in turn a rejection of Clement Greenberg,” said the art historian and critic Michael Fried. In a 2010 New York Times obituary for Kenneth Noland, William Grimes wrote, “With the rise of Pop Art, Minimalism and postmodernism Mr. Noland’s work, with its formalist rigor, fell out of critical favor.” For decades this attitude has hindered attempts to objectively assess the significance of Noland, Louis, Davis, Downing, Mehring, and Reed, not to mention the place of Gilliam, Thomas, and Truitt. At the same time, several of the Color Field artists rejected the notion of a “school of painting.” In fact, Noland left Washington as early as 1961 and Louis died in 1962. Davis met Louis just a handful of times. By 1962, Greenberg had anointed Louis and Noland as the movement’s leaders and chastised others who, he believed, did not give them their due. For years he wielded an immense amount of power and influence. Greenberg, along with critic Harold Rosenberg, helped define post-war American painting and throughout his career he simultaneously served as a critic, curator, collector, and advisor to dealers and collectors. He had few professional boundaries.

That became increasingly clear to us as we perused the numerous boxes and files on the Color Field Painters housed at the Archives of American Art in Washington, D.C. Greenberg was the elephant in the room. We encountered thoughtful letters from him that were supportive and respectful of Louis, and also postcards to Davis that were intrusive. There was personal repartee with Anne Truitt, and painful supplication from Mehring. This spring, while sitting around the dinner table at a collector’s home in Chevy Chase, Maryland, we discussed the recent resurgence of interest in the Washington Color Painters. Morris Louis Now: An American Master Revisited was presented at the Hirshhorn Museum in 2012 and Sam Gilliam caused a stir with his immense 1960s and 70s canvases, shown at last year’s Frieze Art Fair New York. Recent exhibitions of the work of Kenneth Noland and Alma Thomas have been presented in New York. The Thomas survey prompted art critic Roberta Smith to observe that her place in the history of postwar painting “awaits definition.” We observed that regardless of context, the work of the Washington Color Painters always looks fresh and relevant. A fellow dinner guest suggested that the reason the work remains so fresh is the invention of acrylic paint, which retains its vibrant color regardless of the passage of time.

As he eloquently noted, “It’s not about the past or the future, it’s about the now in the painting.”2 But as we hope this exhibition shows, freshness is about more than just paint. It is about a blend of visual pleasure and formal rigor, about vitality conveyed through pure color and form, and the rewards of aesthetic experience. In some ways, it is hard to assess the overall impact of these artists because, sadly, too much of their story is shrouded in literal or critical obscurity. But walk into a painter’s studio today and you will likely see Golden acrylic colors; unprimed canvas and rolled or poured paint. You will see artists taking the canvas from the stretcher and laying it on the floor or hanging it from the ceiling. And everywhere you look, you will see stripes, dots, hardedge marks, and bull’s-eyes. Even if these young practitioners are unable to site specific influences they are the beneficiaries of the groundbreaking efforts of the color painters decades ago. Whether through serendipity or karma, Washington Color Painters Reconsidered opens fifty years to the day after the June 25, 1965 opening of The Washington Color Painters at the Washington Gallery of Modern Art. We hope that this exhibition will contribute in some measure to the current reconsideration of the Color Field Painters and help assert their significant place in the history of American modernism.

Curators’ Note It may seem odd that two contemporary curators who have increasingly focused on women artists and feminism in our exhibitions and publications would choose to embark on such a male-centric, formalist project. However, it is where our interest in contemporary art began and our commitment to the work remains. Sue Scott was introduced to Color Field Painting through the collection of the Washington Gallery of Modern Art, which was sold to the Oklahoma Art Center in 1968, where she was Curator of Exhibitions. While there, she researched the Washington Gallery of Modern Art, and later curated Washington Color Painters: The First Generation in 1990-91 for the Orlando Museum of Art. It was during this time that she befriended Flo Davis, wife of Gene Davis, and had a revealing conversation with critic Clement Greenberg. Helaine Posner studied at Georgetown University and George Washington University, both in D.C., and first encountered the work of the Washington Color School in an undergraduate painting class taught by artist and Professor Daniel Brush. In 1980, she curated an exhibition called Color featuring the work of the Washington Color Painters from the collection of the Chase Manhattan Bank. 1. Anne Truitt’s work is not included in the exhibition. 2. We wish to thank George Hemphill and Gary and Jean Lawlor Cohen for their contributions to his project.