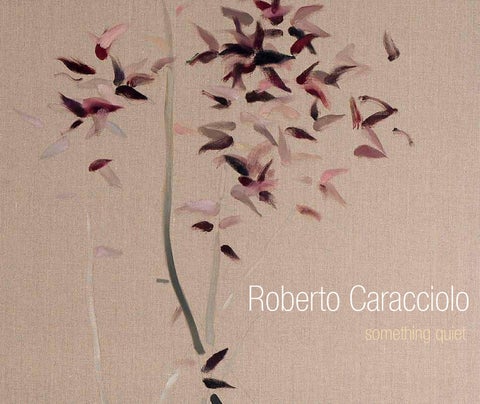 Say Something Quiet Phyllis Tuchman Artist Roberto Caracciolo enjoys a freedom previous generations of abstractionists never experienced. Take Kazimir Malevich. When the Russian painter depicted stylized figures at the end of his career, it was assumed that he was renouncing the non-objective art he had pioneered at the beginning of the last century. Or consider Richard Diebenkorn. On another continent decades later and during another significant moment in the history of non-representational art, the Californian seemed to opt for an either/or choice when he interrupted his engagement with abstraction to instead portray figures and landscapes for a number of years. Caracciolo faces no such restrictions. He is able to take advantage of living in another time and situation. In his current show at the Loretta Howard Gallery, the Italian artist is exhibiting paintings of red leaf tree branches alongside abstractions that feature red and green squares amid lots of white spaces. Refreshingly, Caracciolo addresses diverse tendencies with surprisingly similar formats. Applying the same pigments to canvases of the same dimensions, he limns forms from nature as well as geometric shapes. Depicting seasonal changes with isolated branches of treesâ&amp;#x20AC;&amp;#x201D;some bare, others with fluttering leavesâ&amp;#x20AC;&amp;#x201D;the 58-year-old painter references time. The squares he portrays call attention to the most elemental, rudimentary building blocks of art.

With the nature studies and the abstractions, Caracciolo investigates, in his own words, “who we are, and who we aim to be.” Though he has been painting one tree obsessively, he admits, for more than eight years, the artist makes fewer of these works than the ones populated with squares. In their sparseness, the portraits of branches resemble poems while the more full-bodied, non-figurative oils seem more like chapters in a novel. In both bodies of work, Caracciolo draws on a rich blend of inspirations. In the book accompanying “Painting After Post-Modernism,” a recent exhibition held in Caserta, just north of Naples, the Rome-based artist mentioned his intention of “bringing together different elements: from observations and from the imagination; from readings and from the art of the past; from the rational to toying with chance, the unknown.” Although he was born in New York, Caracciolo has been based in Rome for much of his career. In his paintings, he initially seems to have been able to synthesize the best of two worlds. When he was studying art at the New York Studio School and living in Greenwich Village near the bursting-at-the seams SoHo art scene, he was well versed in the latest daily episodes of American art history. In his life in Italy, he has been surrounded by some of the greatest monuments of the classical past as well as innumerable Baroque masterpieces. Today, when

he walks to his studio, he can see the sparkling, recently cleaned Coliseum in the distance. When he brings his students to museums, he himself has a refresher course in the likes of Caravaggio and Bernini. Not surprisingly, Caracciolo is a superb draftsman and a consummate craftsperson. Nevertheless, he is not so much filtering the greats of the past through the legacy of Modernist painters and sculptors as he is reconciling aspects of realism and abstraction. Caracciolo speaks reverently of his countryman Giorgio Morandi whose still lifes he much admires. From works such as these, he’s learned, as he puts it, “not to shout.” “Whisper,” he told a visitor to his studio on a gorgeous spring day in April. “Say something quiet.” Yet, Caracciolo also is intrigued by the scatter pieces of the American process artist Barry LeVa. Over the years, he’s been intrigued by the ways LeVa creates order from disorder. He even finds himself “putting things in disorder to then try to make sense of things.” He recently told me, “I basically scatter the smaller red strokes over the surface without much thought, to then react and find different solutions to recreate a balance.” When he does this, he feels he is “letting the painting make itself.” As it is, the squares in Caracciolo’s larger abstractions exist in two scales. The bigger ones, functioning as if they were bottles in a still life, attract attention from a distance. The smaller, more active squares are scattered across the canvases as if they were pebbles thrown

onto a flat surfaces. As you draw closer, the detailing becomes more pronounced. The artist doesn’t want you to see everything all at once. He aims to have some parts more pronounced from further away while others are activated as you walk closer to his surfaces. These paintings are not, after all, Minimalist abstractions executed during the nineteen sixties. According to Caracciolo, there is “the clarity of an apparent simplicity in the first instance, when we see things at a greater distance; that partial comprehension that hopefully beckons for more, that invites us to move closer.” Then, he has added, “the more that holds our eyes gives way to a slower observation to a deeper understanding and to the revelation of a more subtle complexity.” For Caracciolo, “color is at the heart of all the paintings.” The current group of paintings features the complementary colors of red and green. In the nature studies, they seem of a piece. In the abstractions, they are positioned in a way that makes the reds and greens seem more discordant. Viewers also are made aware of how the paint was applied, adding yet another dimension to ponder. In these works, the complex may seem simple until you spend more time with them. Or as Caracciolo has noted, there is “the innocence of the first glance and the experience of a n lifetime of looking, both held together on the surface of a painting.”

Roberto Caracciolo something quiet May 31 2018

This catalogue is published in conjunction with the Roberto Caracciolo: Something Quiet exhibition at Loretta Howard Gallery opening, Thursday, May 31st with essay authored by art critic and writer, Phyllis Tuchman.