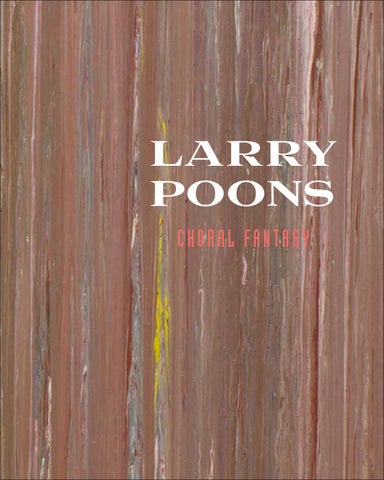 LARRY POONS CHORAL FANTASY PAINTINGS FROM THE 1970S TO 1980S

There’s a certain Slant of light, Winter Afternoons – That oppresses, like the Heft Of Cathedral Tunes – Heavenly Hurt, it gives us – We can find no scar, But internal difference – Where the Meanings, are – None may teach it – Any – ‘Tis the seal Despair – An imperial affliction Sent us of the Air – When it comes, the Landscape listens – Shadows – hold their breath – When it goes, ‘tis like the Distance On the look of Death –

LARRY POONS (circa 1978-1983) Confronting a Choral Fantasy Mary Ann Caws December 2016 There’s a certain Slant of light, Winter afternoons… When it comes, the Landscape listens… Emily Dickinson We listen too. As we look at the works of Larry Poons in this exhibition, we hear the voice of the poet, in all its singularity. And we might, in this newly illuminated universe of visuality, take another perspective. Let’s start with light, of which Larry Poons says, in an interview with Karen Wilkin, we have no memory. What we do remember is Emily Dickinson’s famous poem, marking our reading and our seeing, and the artist’s statement: “It’s all about light.” Aboslutely on the nail, it is always that. precisely because it is newly fresh to our vision. What we cannot remember matters in a different sort of way. We see, hearing it, that certain radiance and know instantly that this is, in the same poem, “Where the Meanings, are.” Again, it is the slant that matters, in another Dickinson poem: The Angle of a Landscape. Here there enters unobtrusively a landscape, a stabilizing and unstated reference in so many of Larry Poon’s paintings of these years.

Something else. On Dickinson’s “fascicles” or leaves of jotted poetry, we find punctuation marks of all sizes and directions, some vertical. These marks of the poet remind us of the most marvelous verticalscapes of Larry Poons — I am using the word marvelous, I hope, wisely, for this is a Renaissance marvelous as well as a Surrealist “merveilleux.” In these cascading works, the vertical drips streak straight up. About the vertical drip paintings, David Ebony uses terms like romantic or lush, comparing them to stalagmites or stalactites and calling upon even the word transcendence, so that the cavernous and the heavenwards somehow merge. That merging seems to me characteristic of the Poons venture in all its always-fresh possibility, its right-thereness. If I compare this to the painter’s love of a speeding motorcycle, sweeping us along that racing road, straight up or down, shall I be thought oversentimental? Risk saying it. Surely the critic has to put the writing self right up there against or with the painting-self: that is, from my viewpoint, personal criticism of the sort we may, if we choose, deal in. Like this: any painter who cares about that so mysterious New England poet Dickinson, who listens to that so imperially moving German composer who was Beethoven, enables our response without having to say it or even be concerned by it. It is only one of a series of responses, a collective yeasaying in a choral fantasy of a real kind, into which our own single reaction enters. That is surely part of the marvelous. Nothing about Larry Poons’ venture feels small. No less powerful than a symphony or harmony or, then, a fantasy. This painter orchestrates, and largely. Something continues resounding.

Let me posit that it is the roughness of the layering, even in the knobbly-textured and spattered paintscapes. You can sense the gesture and its, yes, violence; you can feel the thrown-ness of the paint, from the body itself. Something is racing still, underneath. Poons himself states how he is always wanting to do something he hasn’t done before, but here it is for us also in this exposition: every time we reconfront a piece, it is different. Let me try to explain what happens, related to how it is when you are standing in front of something Poons did: it is like hearing the Tchaikovsky Piano Trio as I did this December, and being aware of the piano notes underneath the others: the tone resounding, however quietly, under the violin and the cello. For we hear the piano and then we wait to hear it again — it is that waiting that gets to us. So there we are looking, and we see it, that tone that will break through the others, not shoving them aside but not having to. I don’t see how else to describe what it is like, our being there and waiting. There are silences and there is our paying attention as we never have before, for the reappearance of the sound, the color, the thing itself. The note we are waiting for must be the tonic, in all senses of the word, both the musical one, and the other vitalizing tonic that makes its way through all the arts at their best. But it isn’t here only about resolution, it’s about the driving energy, no matter what kind of vehicle we might be using with which to feel it. We sense it, underneath the rest, we wait for it to resurface, and suddenly we understand that it is that wait that matters.

Some of these massive works are darker, not ominous, but definitely on the shady side. And yet nothing seems in the slightest depressing, simply serious. On the other hand, and to the joy of the observer, the streaks are sometimes slightly turned toward each other, with rivulets of radiance meeting in the center. Occasionally, there are bursts of light, flashes as if a star were passing by. And then there are gathers, as if a gown were to be lifted lightly upward. Each of these pieces feel spacious, as if we were able to dwell therein. It’s not just the light that gets to us in Larry Poons’ pieces, it’s the texture, how it varies, how we long to reach out and feel it, feel the roughness or then the long darts as they rush upward. One of my favorites is grey and silvery, with a rich sheen glancing off towards us. It seems to endure far past itself. Yes, I do know, it’s all about light, as the painter says, but what isn’t? Yet here it is also about those silences, that awaiting, and certainly those textures. Here is Karen Wilkin again speaking of Poons’ bumpy surface, the “fecund, primordial substance somehow suspended before us.” Wow, that’s it, surely that suspension, that hanging together, is what we wanted to be driving at, waiting along with. After all, that is the slant of light we wanted to n invoke and see by.

LARRY POONS CHORAL FANTASY PAINTINGS FROM THE 1970S TO 1980S