Kikuo Saito: To Paint With Drawing 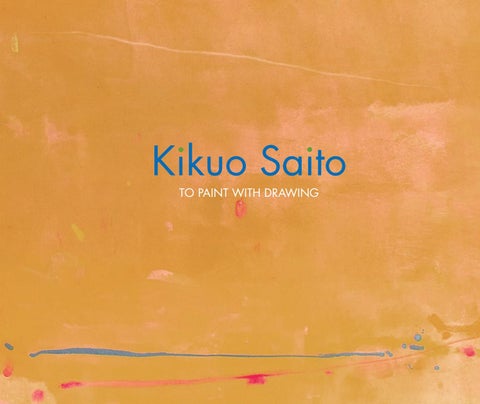 Kikuo Saito: TO PAINT WITH DRAWING There is a polarity in the career of Kikuo Saito, a creative tension between two very different endeavors—painting and the theater. At one pole is the studio, a private place where the artist reigns supreme, making works that will convey a visual experience in a lasting way. At the opposite pole is a public space in which various kinds of artists collaborate to present a multimedia event that unfolds in real time and ultimately will reside only in memory. Saito, a Japanese-born American artist, is now known primarily as an abstract painter, but at several times in his life he devoted serious effort to experimental theater, as production designer, writer, and director. Of course, he brought his well-honed visual skills to the stage, but conversely, he also brought something of the theater to his visual art, especially from the mid-1980s through the late ’90s, a period in which he was, for the most part, away from the theater. The works on view in this exhibition, oil and acrylic paintings (1985–90) and oil-on-paper drawings (1990–99), are hardly theatrical in the conventional sense of the word; they are elegant essays in color and line, drawing on the vocabularies of Color Field painting and gestural abstraction. And yet in subtle ways, these “theater paintings” and “theater drawings” are fully deserving of the name, and

reflection on them yields important insights into how Saito felt a continuity between the two poles of his artistic life. When Saito arrived in the U.S. in 1966 at the age of 27, he brought with him a solid grounding in both modern Western and traditional Japanese art. In addition, he had been exposed to the radical postwar Gutai movement, founded in 1954 by Jiro Yoshihara and Shozo Shimamoto, and something of Gutai’s intensely physical and performative approach to art would later find expression in Saito’s work, both painting and theater. In an article in the Gutai journal, Yoshihara wrote, “The thing that is most important to us is for contemporary art to act as a free space that provides people living in these severe times with the greatest emancipation. It is our deep-seated belief that creativity in free space will

truly contribute to the development of the human race.” In the avant-garde theater world of New York, Saito would discover a “free space” in which to create a freeing experience for viewers. Similarly, on canvas or paper he strove to define a space, made of fields of color, in which energetic markings could move about with complete freedom. It is worth noting that the influence of Gutai is visible in a very direct way in some of Saito’s theater paintings. For example, End Song and Pink Drum, two minimalist acrylics on canvas from 1987, are reminiscent of Yoshihara’s Zen-like circle paintings from the ’60s, albeit much more colorful. Also before emigrating, Saito had acquired a good knowledge of the Japanese theater and dance traditions of Kabuki and Noh, as well as the postwar Butoh, a deliberately brutal, grotesque approach to dance performance that upended the traditional aesthetics. Choreography would remain an important element in Saito’s conception of the theater, throughout his engagement with it. When he arrived in the U.S., Saito had the good luck, almost right away, to meet Ellen Stewart, the founder of the La MaMa Experimental Theatre Club in Manhattan’s East Village. She invited him to work with La MaMa, with which he remained closely associated for many years. In his production designs, Saito aimed at striking effects, such as running water on stage, and used his own abstract paintings as backdrops. Eventually he would collaborate with directors, writers, and

choreographers including Robert Wilson, Peter Brook, and Jerome Robbins on productions in places as far-flung as Paris and Shiraz, Iran. In 1979, Saito took a 17-year hiatus from the theater. Exhausted by the strains and complexities of collaboration, he sought the serenity of the studio. At first he resumed the Color Field approach he had absorbed during his time as a studio assistant to Kenneth Noland, Larry Poons, and Helen Frankenthaler in the late ’60s and ’70s, making works in which large bright swaths of diluted paint converged on each other, defining central white spaces inhabited by smaller bands of color. But around 1985 Saito switched gears, laying down denser grounds of color against which subtle, enigmatic marks are visible. From a distance, the effect is almost one of monochrome, very different from the multicolored effects of the earlier paintings. Nonetheless, the

influence of the Color Field school is still clearly visible. For example, Saito’s Mayweed (1986) echoes Frankenthaler’s Brother Angel (1983) quite distinctly. The edge-to-edge field of color in these late-’80s paintings can be seen as an abstracted stage or set, a field of operations within which actors and props—marks in brighter, contrasting colors—are placed and can move about and interact with each other. The wet-into-wet strokes visible within the background color suggest movement, either that of the actors themselves, or of the dramatic action as a whole, in a more general sense. The circles in some of the paintings could signify a theater in the round, or simply the denouement of a drama coming full circle. In 1976, in his performance Water Play at La MaMa, Saito had created a surreal landscape populated with a house, a zebra, a tombstone, a waitress, and two monks, among other things. In his theater paintings, the landscape or stage is abstracted, and it is up to the imagination of the viewer to fill in what kinds of beings or objects the marks of paint represent. No longer surreal, these plays are schematic; they could be any play or every play. If these works represent a post-theater effort to translate dramatic expression into a more private and permanent form, the drawings from the early and mid-’90s show Saito getting ready for a return to the theater. That ended up

occurring in 1996, when the Venetian-themed Toy Garden, which Saito created in collaboration with his first wife, the choreographer Eva Maier, was performed at Duke University. Compared with the theater paintings, these oil (or oil and pencil) drawings are much more active, full of excited movement that makes them seem like they will soon have to burst out of the flat plane. These drawings are full of sharp, definite marks that convey movement, a very active and rapid sort of movement, like dance. They also suggest meaning, as if they were notations or quickly scribbled instructions. In Saito’s late work, the use of cryptic marks became central, developing gradually into calligraphic gestures, then intimations of language, and finally actual letters of the alphabet, floating in color spaces. Here, though, the meaning is not semantic but schematic; the marks seem like diagrams for a performance or perhaps dance notation. (Saito and Maier were close friends and associates of the dance writer Edwin Denby, whose analyses of choreography were deeply influential on them.) In any case, in these drawings—whose impromptu character is heightened by the presence of perforations at the top edge where they were torn out of notebooks—Saito seems to be stage-managing in his mind, feeling out ideas that he would n soon translate into theatrical reality. —JOHN DORFMAN

City in 1966 where he lived and worked until his death in 2016. Saito studied at the Art Students League and began to exhibit in the early 1970s he has had over sixty solo exhibitions. Saito is associated with Color Field painting and was a studio assistant to Helen Frankenthaler, Kenneth Noland and Larry Poons. A great colorist, Saito’s calligraphic gestural abstractions are full of both energy and contemplation. Saito was also known for his theater collaborations with such luminaries as Robert Wilson, Peter Brook, Jerome Robbins and with his first wife, dancer and choreographer, Eva Maier. Saito’s beginnings in New York were at La MaMa Theater Club where he became a major contributor painting backdrops, creating costumes, and directing his own plays such as Toy Garden and Ash Garden. His productions combined wordless drama in the poetic framework of light, costumes, music and dance. The choreography of his productions significantly influenced the compositions of his paintings. As Karen Wilkin explains, “It is as if we were watching an unfamiliar, deeply moving play preformed in a language we do not understand.” Saito’s approach to painting is rhythmic and lyrical. Much like a dance, Saito alternated from painting on the floor to the easel, moving around the canvas, creating powerful intervals in floods of color. Kikuo Saito was an artist-in-residence at Duke University, a visiting professor at Musashino Art University in Tokyo, Japan and a painting instructor at the Art Students League of New York. His work has been included in exhibitions at the Nasher Museum of Art at Duke University; Portland Art Museum; Andre Emmerich Gallery; Tibor de Nagy Gallery; Salander-O’Reily Galleries; Leslie Feely Gallery, Jill Newhouse and Octavia Gallery. His work is included in the following permanent collections: The Museum of Modern Art; the Whitney Museum of American Art; the Aldrich Contemporary Art Museum, CT; Bain &amp; Co., MA; Central Bank Collection, MO; Estee Lauder Collection, NY; Peter Stuyvesant Foundation, Netherlands and the Queens University, Canada.

Kikuo Saito: To Paint With Drawing

This catalogue is published on the occasion of the exhibit "Kikuo Saito: To Paint With Drawing" happening September 5th - October 12th, 2019 at Loretta Howard Gallery.