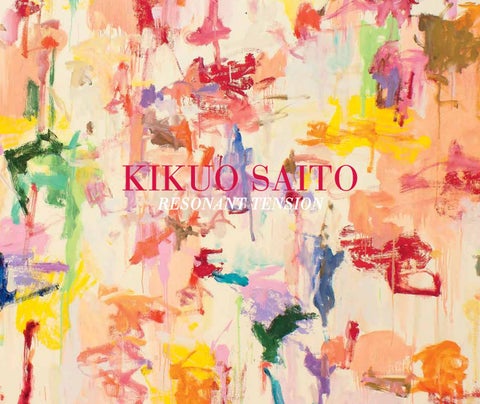 Resonant Tension: The Work of Kikuo Saito by David Ebony

The history of post-war and recent art is currently being revised, reevaluated, and rewritten. The evolution of abstract painting was once confined to a monolithic and irrefutable arthistorical progression that led from Cubism and other forms of early twentieth-century modernism, through Abstract Expressionism, to its ostensibly logical or inevitable apotheosis in Minimalist art. In recent years, this historical construct has undergone a radical reassessment by scholars, critics, curators, and art-world observers. The Tokyo-born, New York painter Kikuo Saito (1939-2016) is one of the deserving beneficiaries of this revision. His work never conformed to the rigors of that well-worn art-historical template in the first place. Thankfully, there is now a secure place in recent art history for farsighted artists like Saito who had a passionate convictionâ&amp;#x20AC;&amp;#x201D;and the fortitudeâ&amp;#x20AC;&amp;#x201D;to resist easy categorization. He realized that there is much more to be explored and discovered in the realm of painterly, gestural abstraction. Like his friend and one-time mentor Larry Poons, who was also born in Tokyo, albeit to American parents, Saito followed his own eccentric and unique path in art and life. By all accounts a charismatic individual, and an individualist, he refused to allow his painting to become rote or easily categorized. As he clearly showed in his work, painting ought to Kikuo Saito in Cape May Point, New Jersey. Courtesy ÂŠ William Noland

be about light and color. It should convey a visual statement that is at once personal and universal. His aim, through painting, was to impart a feeling that comes from within, and does

not conform to any particular canon of art. Compositions, as Saito expertly demonstrated, should be full of sensual movement in the articulation of line and nuanced tonality and texture. In a particularly successful work, the canvas surface would be packed with a certain form of intense, choreographed energy that might be dubbed resonant tension. In Saito’s A Tale of Turkey (2013), for instance, one of the luminous canvases in this exhibition devoted to the artist’s last decade, a dynamic layering of agitated brushstrokes of Prussian blue and cerulean near the top center of the composition crash against the more sedate patches of pale pink and beige scattered nearby. While the painterly flourishes predominate, they differ from Ab Ex gestures in works by painters like Willem de Kooning or Joan Mitchell, which are more visceral and self-referential. The resonating tension in Saito’s 4

work is carefully calibrated and spatial rather than existential. The energy in A Tale of Turkey arises from the dense palimpsest, instead of from the individual markings. Increasingly embraced by today’s art world, a pluralistic concept of art-making encompasses a myriad of painting styles, and also welcomes a multi-disciplinary approach to the medium, tapping into the worlds of music, dance and film. Before his arrival in the United States, Saito was well aware of the Gutai Group of artists in Japan, led by Jiro Yoshihara, who introduced a radical performative element to painting in the 1950s and ’60s. After Saito immigrated to New York in 1966, he became known early on for his theatrical collaborations, beginning with his production designs for the legendary La MaMa Experimental Theater Company, working with founder Ellen Stewart. Later, he collaborated with renowned directors and choreographers, including Peter Brook, Eva Maier, Jerome Robbins, and Robert Wilson, among others.

Saito achieved a theatrical sense of rhythm, movement, and musicality in each of his paintings. Green Pond (2013) is an especially exuberant example that directly references nature. In this allover composition, Saito acknowledges his Color Field forebears, especially Helen Frankenthaler, for whom he worked as a studio assistant early in his career. The horizontal, panoramic expanse, nearly six feet long and four feet high, features vibrant strokes of red, yellow, and orange oil pigment meandering across the surface. As Saito hints at landscape imagery, the picture indicates an autumnal forest reflected in pond, Ă la late Monet. The titular Green Pond appears as a small, furtive passage of deep green in the upper right. 6

A series of so called Alphabet Paintings preoccupied Saito for nearly a decade in the early 2000s. Among the finest examples, Indian Grey (2006) has a velvety slate gray background overlain with brilliantly hued touches of pink, blue and yellow brushstrokes enmeshed with large Roman letters in white. Apparently stenciled, the letters have a strong graphic presence; they recall certain of Jasper Johnsâ&amp;#x20AC;&amp;#x2122;s letters and numbers paintings of the 1960s. The proto-Pop art reference would seem to add an autobiographical touch to Saitoâ&amp;#x20AC;&amp;#x2122;s paintings in the series, as the earliest works that he brought with him from Japan to New York were in a Pop art vein. The overall graphic design of Indian Grey, however, seems rather far removed from a Pop sensibility. Saito here addresses the use of language in an esoteric and rather romantic way. The letters, carefully composed with the help of an underlying grid, have a decidedly archaic feel that would, soberly and serenely, refer to antiquity or, generally, to the passage of time.

In other Alphabet Paintings, such as the poignant Orange Dust (2004), the Roman numerals and letters seem to dissolve into a painterly deluge of white, gray and yellow drips and daubs. It is interesting to compare this work with one of Cy Twombly’s contemporaneous paintings, which share a similarly ambiguous comportment of feverish, calligraphic urgency and cool, classical reserve. One of the most sumptuous works in the series, Indian Drum (2009) suggests an imaginative conflict—a conceptual combat, at least—between linguistic signs and symbols, and the fluid and elusive language of painting itself. Ghostly white text, in the form of Roman numerals and letters, has been nearly obliterated, pushed to the very edges of the canvas. Painting triumphs here, as a centralized flurry of white, pink and deep red slashing 8

brushstrokes nearly covers the entire canvas—a bloody battle indeed. The title of Lydian (2014), one of Saito’s last major works, and one of his most sumptuous, refers to the Lydian Mode, an elaborately augmented musical scale. In his later works, Saito eschewed the grid, and the compositions are more freeform and fluid, as in the style of musical improvisation. In Lydian, a rainbow spectrum of painterly dashes and daubs vibrates against a clear white background; it appears almost like a form of musical notation. In his later years, Saito arrived at a personal means of expression in painting that is lyrical in just about every possible way.

David Ebony is a contributing editor of Art in America, and a columnist for Artnet News and Yale University Press online.

This catalogue is published in conjunction with the exhibition Kikuo Saito: Resonant Tension at Loretta Howard Gallery with essay by contributing editor of Art in America and columnist for Artnet News and Yale University Press online, David Ebony.