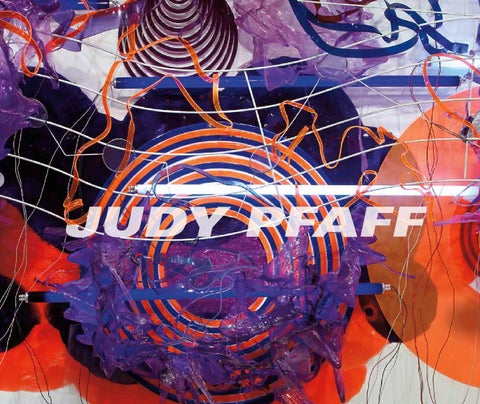 “I wanted illusion. I wanted space. I wanted anti-gravity. I wanted buoyancy and color and something that had a living system involved with it.” *

JUDY PFAFF is a rare artist and confronting her work has never failed to make me insanely happy. For more than four decades her independent originality has challenged categorization and energetically colonized space. She has opened up a way of seeing and a way of working that, by now, (stealthily) has become embedded in the culture of the Post-Modern avant-garde. Since she made her debut in the early 1970s, she has developed an increasingly inventive narrative vocabulary that explores the unexpected intersection of the real and the abstract, exuberantly located in three-dimensional environments, abetted through sheer process. The impact of her sometimes psychedelically manic, sometimes meditative art is visceral, theatrical, and often quite stunningly poetic. Things seem to dance on the verge of ebullient chaos until you realize that everything is underpinned by strict systematic armatures. They paradoxically allow their ever-restless creator freedom to build up delicate skeins and dense layers of intuitive relationships. The assembling process, while it may appear random and largely improvisational, is actually governed by Pfaff’s strict and disciplined attention to underlying structures upon which she subsequently builds, or better yet, extemporizes, * Judy Pfaff, The Brooklyn Rail. A conversation with editor/publisher Phong Bui, October 6, 2010.

using unpredictable found objects, unusual textures, wild color and appropriated industrial fragments and materials. Sometimes her most “sculptural” work appears to be the result of an insatiable scavenger hunt. She invents like a composer and like a jazz musician. Here it is imperative to stress that it’s essential to see these works “in person.” No reproductions, jpegs, or Instagram images, for none have the capacity to convey the subtle cadences and sheer energy of Pfaff’s work. The current major double exhibition of Pfaff’s latest work presents apparently diametrically opposed themes. It simultaneously transforms the Pavel Zoubok and Loretta Howard galleries, into magical geometrical realms, amazing labyrinths and festivals of unpredictable shapes, densely built collage and sinuous, often subtly sinister metaphors for nature’s cycles of growth and decay. While each of the two exhibitions embody radically different ideas, the stubborn exuberance that is Pfaff’s alone infuses each one with equal magnetism. At Zoubok, Pfaff’s title, Second Nature, evokes her ongoing dedication to natural forms and nature’s organically and scientifically complex systems. Using melted plastics, flowing, expanded insulation foam (sometimes partially dyed in earthlike hues), bits of honeycomb, resins, dried leaves and gnarled tree branches,

metals, digitally printed images, artificial flowers, and even butterflied paper lanterns, Pfaff has created a dreamlike, mysterious sequence of objects and collages that together form an environment saturated with inferences of the cycles and substances of the natural world. Let’s also talk about Pfaff’s recent collages, some 50 of which enrich Zoubok’s gallery walls. The image-loaded, frequently horizontal, two-dimensional compositions, are hung here against virtual tapestries of computer generated, lushly colored photographs. The collages consist of delicate yet tightly packed layers of found images, among them prints and photographs of flowers, landscapes, street life, travel and almost anything else you can imagine,

often downloaded from the Internet (Pfaff has embraced its universal reach) and now glued on top of old documents and other ancient papers. Titles of several of these works, among them Raga, Udaipur, and Jaipur, infer India’s abiding allure for the artist. At Loretta Howard’s large upstairs gallery things are calmer, lighter, and sunnier than the earthbound, sometimes ominous tangles that favor black and subdued earth colors at Zoubok. This part of the double exhibition is called Run Amok. What Pfaff is investigating is the realm of the experimental geometries of modern art. At Howard’s, several individual pieces celebrate both Pfaff’s intense interest in the legacy of Constructivist ideas and the paradoxes of 20th Century

geometric abstract painting and sculpture, also revealing her specific respect for the work of Larry Poons, Al Held, Bridget Riley, Jules Olitski, and the gallery’s ongoing commitment to color field artists. Take one example: Moon Dog, Devil Dog, (for Larry), (2014). It’s Pfaff’s wall-hung confection of day-glo colored and luminous pastel-colored melted plastic rectangles, resins, expanded insulation foam and acrylic, that is both for Poons and for the legendary Moon Dog (1916-1999), the blind, lushly bearded Viking-costumed street poet, musician, and composer who presided over 6th Avenue between 55th and 52nd Streets from the 1940s until 1972 whose given name was Louis Thomas Hardin. Blue Note (for Al), 2014, a delicate, horizontal composition of airy, translucent pigmented fiberglass circles is in memory of Held. The late painter was Pfaff’s influential teacher at Yale, where she was studying for an MFA in the early 1970s. His evolving, brilliant struggle to both challenge and animate abstraction, as he considered the conundrum of three-dimensional abstract space in painting, has had an ongoing impact on Pfaff’s own intellectual debate about the 1970s fierce conflict between abstraction and realism. Never subscribing exclusively to either side, she has always remained a maverick thinker and, early on, also declared herself a determined “anti-minimalist” when Minimalism was a fiercely dominant, testosterone-saturated style.

Also notable is There is a Field, I Will Meet You There, (2014), Pfaff’s glowing sculptural meditation of jagged shapes constructed from steel, Plexiglas, plastic, florescent lights, and expanded foam which is a floating, three-dimensional evocation of traditional Chinese landscape painting and kind of homage to the Dalai Lama. Pfaff absorbs her influences from many worlds and many cultural, spiritual, and philosophical pathways. Among her experimental predecessors it may be illuminating to remember Kurt Schwitters and his legendary Merzbau, (Schwitters worked on the fantastic, room-sized construction, Merzbau in Hanover, Germany from around 1923 until 1937, when he fled to Norway to escape the threat of Nazi Germany. Sadly, in 1943, while he was in exile, it was destroyed in an Allied bombing raid). El Lizzitzky’s 1923 Proun Room for the Berlin railroad station was another early influential departure from work that simply hung flat on the wall. Later, there was Frederick Kiesler’s remarkable 1942 Surrealist Abstract Gallery Room for Peggy Guggenheim’s 57th Street The Art of This Century Gallery. It consisted of a room painted totally black, filled with Surrealist forms that dissolved the visual, the actual image, and abstract forms (randomly illuminated by flashing spotlights) into a kind of Surrealist funhouse. Yet none of these pioneering forbearers provoke the sheer visual joy delivered by Pfaff’s constructions.

How does she do it? For one thing, the intense labor involved is a combination of Pfaff’s solo efforts and the orchestration of a trained production team, whose participation she always acknowledges. A visit to her upstate Tivoli, New York studio is like coming upon an extravagant epicenter of set design, a cross between some 21st Century Santa’s Workshop and a mysterious inventor’s laboratory. (Like a fine mechanic, the artist appears, holding in hand an electric screwdriver.) What surrounds her sprawling main studio building are various outbuildings, some fenced in chickens, an unruly garden, bales of wire and parts of heating ducts, plus pieces of machinery, as well as big tanks of propane Pfaff and her team use to melt the colored plastics that catch her fancy. (They get reformed and reformatted into all kinds of abstract shapes.) Furthermore her sources for raw materials include the scrap yard, the Yellow Pages, Target, and equipment sales on the Internet. Inside, there unfolds a series of vast working spaces, stacked with the elements she will use to assemble each work, offices and a state-of-the-art Epson industrial strength digital printer that can amazingly produce the large sheets of Pfaff’s kaleidoscopic images. These days it is usually operated by one of her talented female Bard students; a member of her cadre of versatile assistants. Pfaff’s apparently indomitable energies and ebullient generosity to her students (who have included Ann Hamilton and Jessica Stockholder) have produced an astonishingly steady and

productive art world career, with virtually countless exhibitions, stacks of honorary degrees, grants, and awards. Then there are her major public, usually temporary “installations” such as her monumental contribution to the 1998 São Paulo Biennial, Corona des Espinhos. (By the way, Pfaff is no fan of the term “installation,” whose meaning has been so carelessly tossed around that these days it can and does cover almost anything.) This was an epic adventure which entailed shipping a huge number of downed, found and sterilized pine tree branches to Brazil from upstate New York and assembling perhaps her most monumental and dramatic piece to date. Pfaff also has maintained a distinguished academic career ever since she taught at The School of Visual Arts and then at Columbia and, since 1994, she has been the Co-Chair of the Art Department at Bard College. Pfaff has never subscribed to any aesthetic school though she has investigated many. She has been too busy, too independent, and too just plain ornery to fall prey to restrictions of the academic feminists of the 1980s and 1990s. She belongs to a ground-breaking generation of strong, exceptionally innovative women artists that has included her late, good friend, Nancy Graves, as well as Ursula von Rydingsvard, Joyce n Kosloff, and Carolee Schneemann. It is a generation that is finally getting its due.

There is a Field, I Will Meet You There (Rumi), 2014 Steel, plexiglass, florescent lights, plastic, expanded foam Installation-dimensions variable Loretta Howard Gallery

above &amp; opposite: There is a Field, I Will Meet You There (Rumi), 2014 Steel, plexiglass, florescent lights, plastic, expanded foam Installation-dimensions variable 12

This catalogue published on the occasion of the exhibitions

Judy Pfaff was born in London, England, in 1946 and arrived in America when she was thirteen. She received a BFA from Washington University, Saint Louis (1971), and an MFA from Yale University (1973). She has been the recipient of dozens of awards including becoming a Fellow at the American Academy of Arts and Letters, a Guggenheim Fellowship and, a 2004 MacArthur Foundation Award. In 2013 The International Sculpture Center honored her with its 2013 Lifetime Achievement Award. Alexandra C. Anderson, former editor-in-chief of Art &amp; Antiques Magazine and featured writer for ArtNet.com, is an art critic and art historian who lives and works in New York City and Columbia County, New York.

Long heralded as a pioneer of installation art, Pfaff continues to generate work that is innovative in its formal complexity, breadth of reference, and sensitive use of materials. Run Amok at the Loretta Howard Gallery plays upon the gallery’s longstanding involvement with color field artists and her own relationship to the legacy of 20th century abstract geometry. Second Nature, the installation at Pavel Zoubok Gallery celebrates the artist’s fascination with nature and landscape. The artist collages tree roots, limbs, honeycombs, and leaves with ambiguous biomorphic forms. We are immediately aware of her careful study of naturally