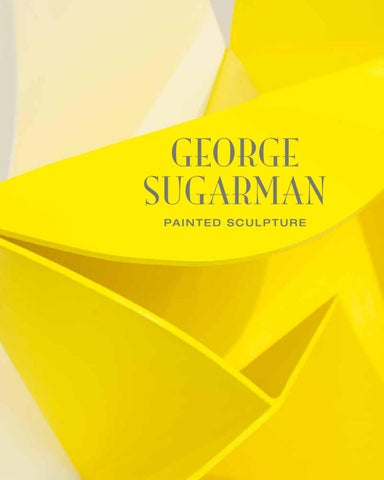 Sugarman is a formalist above all, but his sculpture is often experienced by viewers as emotional and as metaphor. He understands why his work is perceived as emotive, most likely because of its color, and he accepts it, although he does not set out to evoke specific feelings. On the issue of metaphor, he wrote: “All art is metaphor, if one wants it that way… [It can also be} sheer physical stimulation or the insistence on a system of formal relationships that has meaning in and for itself. Metaphor, stimulation, formal relationships, three ways to meaning. Is it necessary to choose? My choice has not been to eliminate but to keep all possible sources of meaning open. Open is a word I like… Complexity is another.”1 As metaphor, Sugarman’s polyglot forms are often taken to evoke the variety and multiplicity of contemporary urban life. For example. The dissociation in all his pieces calls to mind the incongruity of New York, in which it is common to find a Beaux-Arts building abutting a high-rise, glass curtain-wall or perhaps Gothic Revival office building. There is, moreover, in Manhattan, where Sugarman lived and worked for a quarter of a century, the sharp contrast in scale between skyscraper on the North-South avenues and brownstones on the East-West streets. The emphasis in Sugarman’s construction is on the individual component more than on the work as a whole; that is, the parts tend to be apprehended in sequence, one by one. Each of his sculptures seems to be made up of many sculptures. This fosters openness and complexity since there are no expected relationships among the disparate parts. But there is an allover unity. As Sugarman wrote, no form or color is allowed to become dominant; “a rigorous formal relationship throughout keeps each element in its place while allowing it its maximum assertiveness.”2 Sugarman’s use of color is innovative; he was the first modern sculptor to apply a solid coat of paint to every one of his volumetric shapes in order to project color fully in three dimensions. His strung-out, continuous structure above: Untitled (for Spain), 1990 Acrylic on aluminum 25 x 10 x 91/2 inches

1. George Sugarman, Statement, in the catalogue of a show of his sculpture at the Virginia Zabriskie Gallery, New York, 1974, n.p. 2. Ibid. Another element which unifies Sugarman’s sculpture is the uniform coat of paint.

was also new in sculpture, as was that of his close friend, Al Held, in painting. Indeed, Sugarman and Held dared to experiment with this novel composition, seemingly and potentially open-ended, because both felt that the rhythmic arrangement of more or less similar forms around a central axis in sculpture or contained within the picture limits in painting had become too ordinary and outworn. To avoid the expected manner of composing — it came to be called “relational” in the sixties — they even imposed “rules” on themselves, for example, never to repeat a form or color in the same work. Moreover, there was in relational design a visual ambiguity that made Sugarman and Held uncomfortable. They wanted — in fact, aspired to – clarity, that is, the articulation of each form in its own space as a specific, self-contained entity, and this at a time when the dominant style was amorphously “painterly” — both in painting and in sculpture. Sugarman and Held were friendly with other artists who had begun to value clear form and clear color in art, among them Ronald Bladen, Sylvia Stone, Tom Doyle, David Weinrib, Sal Romano, and Nicholas Krushenick, most of whom were members of the Brata Gallery, and artists’ co-operative on Tenth Street in downtown New York.3 Because of his urge to disjoin the segments of his constructions, Sugarman had to invent a great variety of forms, and the abundance of his ideas, his imaginativeness, distinguished him from any sculptor of his generation. n Please note that many of these sculptures were intended to also be made in a larger scale. 3. In 1965, I organized a show titled “Concrete Expressionism” at New York University consisting of paintings and sculpture by Ronald Bladen, Al Held, Knox Martin, George Sugarman, and David Weinrib.

Published on the occasion of the June 2016 exhibition George Sugarman: Painted Sculpture at Loretta Howard Gallery. Essay by Irving Sandler.